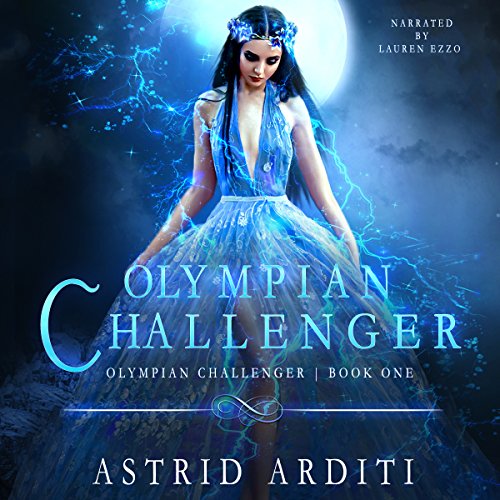 By: Astrid Arditi
Narrated by: Lauren Ezzo
Try for $0.00

A hero's tournament. A defiant contender. Does one girl have the courage to take on Mount Olympus?

Hope's world doesn't have room for heroes. She barely has time for schoolwork, swim team, and taking care of her ailing mother. But when she's invited to a mysterious tournament, the all-powerful hosts won’t take no for an answer.

Transported to Mount Olympus, Hope comes face to face with her new trainers - the pantheon of Greek gods. While other contenders train hard to gain a fighting edge, Hope searches for a way out. Instead, she finds a gorgeous shadow god who may just convince her to stay...

As each round unfolds, the ultimate prize draws closer - the granting of her heart's deepest desire. If she survives the final challenge, her mother's cure would be within reach...but only if Hope can ignore the tournament's dark purpose.

Olympian Challenger is the first audiobook in a bold YA urban fantasy trilogy that fans of Rick Riordan and Cassandra Clare are sure to devour. If you like Greek mythology, forbidden romance, and feats of courage, then you'll love Astrid Arditi's heroic coming-of-age tale.

What listeners say about Olympian Challenger

Well written, so much magic of more than one kind. The world build is awesome along with the various characters. The narrator Lauren Ezzo brings the story alive were it seems your one of the characters. I enjoyed listening to this fantastic story.. I can not wait to listen to book 2.

I really liked this story! the performer had a hard time with the guy voices at parts but it was still good. The story was different than any I had ever heard, which made it quite unique and awesome.

I enjoyed this story. I like how the author involved the Greek Gods and mythology into the story and quests. The pacing was good and the world building was on point. The narrator did a great job bringing the characters to life. I look forward to more in this series

Mix Percy Jackson with the Hunger Games and a dash of Twilight, and you get the Olympian Challenger. This is a terrific YA Greek Fantasy book that's entertaining for adults too.

The narrator of the audiobook does a nice job, but she pauses between sentences a bit too often which makes her narration choppy at times.

Let me first start off by saying, that I don’t normally review books. I just read a book and keep it to myself. But when I got an email from the author of this book saying she’d give a free audio copy to the people that would review it, I figured I had nothing to loose, and a free book to gain.
I started this book in a bit of a slump. I’d just finished a book I enjoyed and had little hope this book would amount to anything I’d enjoy.
The first few chapters of the book I was afraid I was right. I had a hard time getting to the point I liked Hope, the main character.
I, at the beginning of the book, often thought the character lacked much depth. But as I “got to know” Hope, I realized there was much more than meets the eye. She’s a fiercely loyal friend, devoted daughter, and emphatic to those around her.

The story centers around a group of seventeen year olds, who get swept into the world of the Olympian gods. There, they face many challenges to narrow down the contenders to help them find their new hero.

The teens and olympians Hop gets to know, really lend their attributes to the story. The only complaint I had in this department was, Gabriel. I thought his character was lacking in depth, and was often little more than the “stereotypical” gay man.

With that said I thought the author did a great job tying up the book, while still making you hungry for the next one in the series.

All in all, I enjoyed the book, and plan to buy it for my niece for Christmas.

This was a mix of Greek mythology (strong emphasis on this) mixed with the Hunger Games mixed with a tiny bit of Twilight. Really good read for the young adults/ teens.

I thought that the authors portrayals of Hope and her reactions to her mothers dementia to be pretty realistic. I won't spoil anything, but I did have to really think about why Hope made the choice she did in the end, but it does make sense when you think about it.

I had to adjust to this voice a bit before I could enjoy it but once I had it was pleasant, the different characters were not at all difficult to recognise due to the different tones the narrator used. It was all well pronounced and easy to follow with my impared hearing and non-English spoken language.
As for the story, I loved it. Love (Greek) mythology. Although the ending isn’t exactly a surprise, that doesn’t take away any pleasure hearing this story, I can’t picture it ending any other way. Love all the challenges that the challengers had to do. The whole story is well thought out and doesn’t have plot holes. The cliffhanger isn’t too bad either, because I hate cliffhangers, but it does give a promise for book number two after a nice ending for this one. Definitely recommend if you love (Greek) mythology, because that is woven in beautifully in this story.