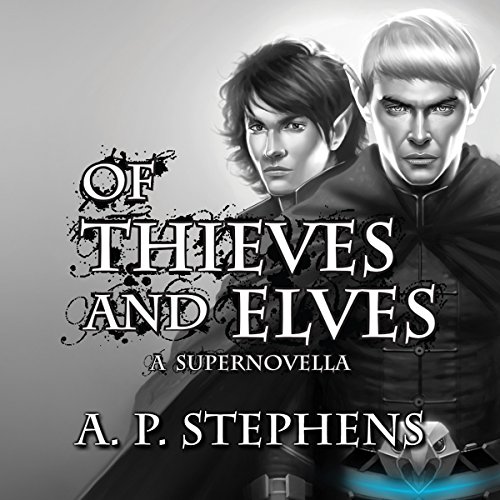 Of Thieves and Elves

A monumental tragedy has befallen the Clan of Ionor, an ancient brotherhood of elven warriors. Concerned when their Master does not reach his secretive business in a distant kingdom, the Elders learn that Tryn, their beloved leader, has been captured by a cutthroat gang of bandits known as the Steel Claw. Yet this is not the darkest of their tidings. The relic under the clan's safekeeping, a weapon of terrible power that was forged by the gods themselves, is also missing.

The Ionor dispatch Eonen, a headstrong Elder, and a young and talented apprentice, Tride, to rescue the Master and the relic by infiltrating the bandits' stronghold - the formidable Fortress of Toppledom. As the two determined elves hasten into the unknown beyond their borders to restore balance and honor to their clan, they encounter the true darkness behind the matter - the very origin of the world's evil.

Allegiances will be twisted. The fates of many will be set into motion. And the destiny of one will be realized.

What listeners say about Of Thieves and Elves

Of Thieves and Elves, immerse yourself...

Where does Of Thieves and Elves rank among all the audiobooks you’ve listened to so far?

Of Thieves and Elves is one the higher ranking audiobooks in my collection.

I very much enjoyed Of Thieves and Elves by A.P. Stephens. The author has a unique prospective of the of fantasy world which I find refreshing. The ability of the author to create grand images of scenery, both stark and wondrous, as the main characters travel on their journey is astounding. The action is hard hitting and battle scenes are very descriptive and brutal in a way that will have you feeling as though you were standing amid the frenzy.

Have you listened to any of Michael Roger Lane’s other performances before? How does this one compare?

No,this is my first one. Mr. Lane's performance is outstanding. I thouroughly enjoyed his narration and charcter voicing in this Supernovella.

It's OK but failed to grip or excite. I read a lot of fantasy books and this one follows a pretty formulaic path, with nothing innovative or new.

Obviously written to launch a series of books leaving the story half told.

The narrator is OK but not great.