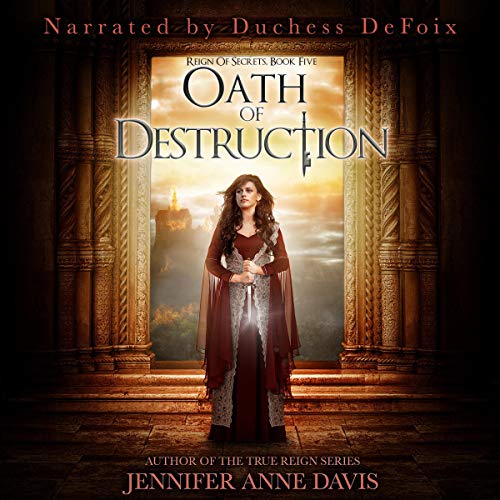 By: Jennifer Anne Davis
Narrated by: Duchess DeFoix
Try for $0.00

The epic conclusion to the Reign of Secrets series is here.... Allyssa was raised as royalty. Savenek had been trained as a spy. Alyssa grew up doted on by her parents. Savenek's adoptive father had often shown his love through strict training and discipline. Allyssa died too soon, loved and mourned by her kingdom. Savenek is supposed to take her place, but struggles to win the hearts of the people and parents who don't know him.

When Savenek finally settles in to life at court, Alyssa shows up alive, in time for their 70th birthday celebration. Everything in Savenek's life feels like it's exploding again. While Alyssa has managed to stop the war with Russek and form a powerful alliance, Savenek knows there is a greater danger surrounding them.

As Emperion teeters on the brink of war, a much more personal battle plays out between twin siblings. If Allyssa and Savenek want to save their kingdom from being destroyed, they must learn to work together, trust one another, and rely on each other. When duty, loyalty, and family clash, can there be room for two royal heirs? Especially when one is being a royal pain?

What listeners say about Oath of Destruction

It all comes together!

The worst part about this book is that it’s over! I feel like I’ve lost two friends. This book was the perfect conclusion to the series though. I loved seeing the two siblings together and watching them learn how to interact and what’s important to each of them. Once again, the author did an amazing job at balancing romance, action, excitement, and plot twists! This series will definitely be one of my all time favorites, and I would highly recommend!

I have read this book twice now before listening , so honestly I wasn’t too sure how much I would love listening to it.... however like all Jennifer Anne Davis stories it was amazing! I would recommend to everyone, of course make sure to read or listen to al the previous books in this wonderful series.

This was the final book in the Reign of Secrets series. I loved the ending, I could not have asked for a better one; however, I am sad that it is over. I really grew to love these characters and I enjoyed watching their journey.

In this installment, you finally get to see things from both Allyssa and Savenek’s POV. I really enjoyed seeing how Allyssa and Savenek are able to form a bond after being apart of their entire lives. Yes, it is fast but I think that it is believable because they are able to see how the other lived beforehand and they are both mad at their parents for keeping them apart.

I think that Karden is my favorite character in this series. I love how straight forward he is and that he shakes things up for the royals. Oh and the romance between Allyssa and him was top notch. I also couldn’t help but root for Savenek and Maria too.

This series had amazing writing and the story was wonderful. I could not have asked for more. Jennifer Anne Davis is now an author that I need to read more by. I really hope that she decides to come back to this world and give us a few more books 🙂

Missing parts of the book

I didn’t realize the audiobook version had been released. I was excited and downloaded right away. When I skipped forward to one of my favorite chapters (11 digital, 12 audio) I was very disappointed to discover an entire page was skipped over! I’m worried what other errors and omissions I will find.