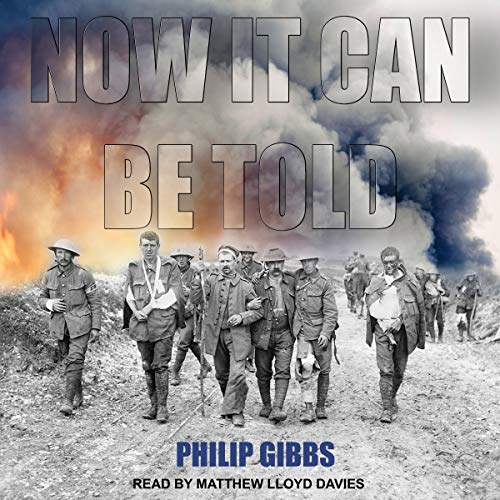 Now It Can Be Told

By: Philip Gibbs
Narrated by: Matthew Lloyd Davies
Try for $0.00

Sir Philip Gibbs served as one of five official British reporters during the First World War. In this book he relays the experiences of British soldiers and offers a detailed narrative of the events of World War I, while trying to draw broader conclusions about the nature of war and how it can be prevented in the future.

What listeners say about Now It Can Be Told

I have a reasonably good lay knowledge of the political & military history of WW1: the archduke, trench warfare, etc. But this firsthand account by a British war correspondent who experienced the whole thing from beginning to end provides a much more personal and up-close account. Very worthwhile, and wonderfully written and performed.

I delayed in purchasing this audiobook because of the bad reviews complaining about the narrator whispering or talking too quietly. I'm glad I didn't pay attention to these, as they should have turned up their hearing aids, or put the children to bed. I listened to this book with headphones next to a loud factory machine all day and I heard every word loud and clear.

This is an excellent collection of accounts by the author who visited the men fighting in the trenches daily during the duration of the war. Easy to follow, eloquently written, and disturbingly graphic. if you have any interest in WW1 or military history, this book is right in your zone, one I will soon add to my bookshelf. Don't let the deaf reviewers prevent you from getting this masterpiece.

In spite of the other reviews which spoke of bad narration, I listened to the sample, and thought it would be fine. I was familiar with the book via the Hardcore History podcast, and was very interested in hearing it in full.

I can say that the story is very informative and well written. But, indeed, the narrator becomes so hard to listen to, that I almost didn't finish the book. Some narrators simply need to read what's written, not try to add character accents, as Davies does with this book. His French "accent" isn't great, but it's not terribly annoying, Once you get further into the story, however, and he starts to imitate a German "accent", that's when the real horror begins. Davies' cartoonish portrayal of German officers and soldiers is so revolting that it almost completely ruins the content. I'm not even going to mention what many others have--that Davies tends to whisper and then gets much louder. For me, listening on external computer speakers, it wasn't so bad, but with headphones, I'd imagine it's very annoying.

Bottom line--as much as I respect the content of the book, had I known just how difficult it would be to listen to Matthew Lloyd Davies, I definitely would've passed on this one!

An exceptional first hand account of life and death on the Western Front. Matthew Lloyd Davies narrates beautifully (even in French). Bravo sir.

This story gave me chills and saddened me to know how foolish people could be in the name of patriotism.

Only a vehicle for the author's opinions

He does a good job of presenting the generals' (of both sides) incompetence and disregard for the soldiers' lives. But his florid melodrama and maudlin appeals for sympathy distracts from the real pathos of the story. His rampant misogyny also detracts. All women are presented as sluts and slatterns, diseased and predatory. The soldiers only as their victims. Even a man convicted for attempted rape while on leave in England is presented as having been unfairly treated because "...he only wanted a little kiss..." and "...it was not too much to ask..."( in recompense for everything he had gone through). The author's (lengthy) opinions at the end of the book also detracts as it makes it seem that everything prior was only presented to give credence to his opinions.
A poor read if you are looking for the reality of a soldier's experiences in World War 1.

The narrator starts most sentences out really loud than finishes at a whisper . It was hard to hear and if you turned up the volume the start of each sentence was deafening.

Tons of primary and secondary sources.

This book has so many primary and secondary sources of the ground level view of the great war. It is visceral and gritty and oddly humorous at times. Philip Gibbs gives his own opinions on the war and different themes and is pretty biased towards the British, as you would expect from a British war correspondent publishing in 1920, The accents and other languages read by the narrator were phenomenal. I did find it annoying that the book doesn't translate every foreign phrase that makes it in. Highly recommend for anyone who enjoys war memoirs and ground view history.

a bit hard to follow at times but powerful

don't go into this book expecting one arcing story. it is more a collection of anecdotes, ideas, and accounts of the western front, though some parts follow this line more than others.

over all absolutely splendid.

The most humanizing view of an industrial war

I've been on a WWI kick for the last few weeks, listening to audiobooks and watching every documentary I can find. This is, by far, the best of the lot. The scope of the work captures the evolution of the war from a close-up perspective that's exceedingly rare in my limited experience. Most WWI narratives are either hopelessly removed from the people in the trenches (aside from the obligatory catalog of filth and misery there), or else only focus on a particular battle like the Somme.

This book is exactly what I've been looking for, with remarkable breadth threaded through with the sort of strong personal experience I came to expect from reading books like Band of Brothers or Slaughterhouse 5. It feels unique, even fresh, for the way it embodies dangers beyond trench foot and shell shock, though the latter appears and is met with all the understanding available at the time. (Be prepared for some quietly disappointing misogyny, thankfully brief and rare.)

In addition to the stirring yet frank writing, the narrator for this recording has a slew of accents he wields to great effect, bringing the subjects to life.

This is the best narrative of the first world war I've read to date, man's inhumanity and also his humanity is brought home, brutal, gritty and also very moving, brilliantly narrated, I recommend this book highly.

loved it. very informative well worth the time invested. I am glad I bought it

Well read, and written from a war correspondent of the era ...will be looking for his other accounts ..

war of the clases

interesting public school perspective to industrialised war . its a wonder anyone came home in one piece

Fantastic story, well wrote and performed with humour and true feelings. I highly recommend the book 5 out of 5 stars.

Fantastically written book and well narrated. If you have even a small interest in The First World War then get this book downloaed.

Well worth investing in.

I had no issues with the narrator doing accents, only problem was when he quoted French people without translating what had been said.