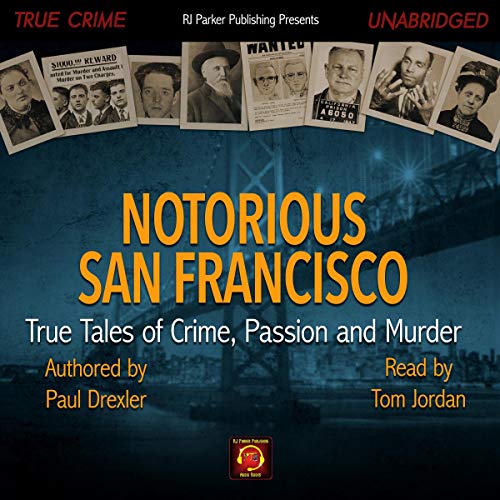 By: Paul Drexler
Narrated by: Tom Jordan
Try for $0.00

San Francisco, a city founded in part by criminals, was once one of the most dangerous cities in America. Its Barbary coast was called “a unique criminal district that was the scene of more viciousness and depravity, but it possessed more glamour, than any other area on the American continent.”

Notorious San Francisco brings back the glamorous depravity and noir atmosphere that made it the premier location for murder thrillers like The Maltese Falcon, Vertigo, and Zodiac.

This book contains more than 20 compelling tales of serial killers, deadly women, con-men, masters of escape, and unsolved mysteries. San Franciscan criminals were as colorful as the city they inhabited. Take William Thoreson, a murderous millionaire who hid the nation’s largest private armory in his Pacific Heights mansion. Then there’s Isabella Martin, the murderous “Queen of Grudges” who tried to poison an entire town, or Ethan McNabb and Lloyd Sampsell, the “Yacht Bandits”, who used a luxurious sloop as a getaway vehicle for their dozens of bank robberies.

Most of these unusual cases are largely unknown and have never appeared in book form. Included are cases that are still mysteries today, including the mysterious tale of the Zodiac Killer, complete with a new analysis and a startling new theory on the murder.

I liked the book and you will too if you like to read about crimes in the past.

This compilation of tales is a must-read/must-listen for any enthusiast of the true crime genre. The cons, the mysteries, the hoaxes, and the fascinating history contained in these stories remind one that oftentimes fact is stranger than fiction. The men and women featured in these tantalizing tales truly exemplify the rarefied pedigree that was required to weave the uniquely rich and vibrantly colorful history of San Francisco. Recognition should be given to the narrator, Tom Jordan, who brings these stories to life with his flawless narration and wonderful character performances. His talent never fails to augment the work of the authors with whom he collaborates. Stellar work by both author and narrator.

I received a free audiobook copy of this book and I am voluntarily leaving this unbiased and honest review.
If you find this review helpful, I thank you for so indicating.

Notorious San Francisco is a compilation of various "bad guys" from the early days of San Francisco. For history fans, especially those of the darker side of history, this is a good listen. Tom Jordan, as always, narrates in such as way as to hold your attention, making you feel as if you are there with the bad guys. Give Notorious San Francisco a listen. If crime is your "bag', you will fill it with this book.

This was a terrific audiobook, loved to listen in the car to these mostly unknown criminals and their stories. over 20 stories of murder, stealing, cons, and heartbreak for the families left behind.
Tom Jordan did an amazing job as the narrator and I could listen to his voice for hours on end.

Like every major city in the US, San Francisco has it's "nasty" history. Violent crimes are nothing new to large cities and SF has had it's share. I really enjoyed listening to the darker tales of SF. It's crazy some of the things that happened but they always say that fact is stranger than fiction. I enjoy listening to true crime stories and this one doesn't disappoint. The narration was excellently done. Tom Jordan really brings these stories to life and pulls the listener in with ease. A really great collection of tales and a great narrator make for a highly entertaining listen!

I am not generally a fan of 'documentaries', but this one caught my attention and held it for the entire book. One can't help but wonder "why" people turn out in such a way to create monsters. This book is filled with them.
I AM however a HUGE fan of Tom Jordan. His voice is amazing and he does a fantastic job of narrating this one, as he does all of his work. Characters come alive when Tom gives them a voice and even the 'background' narration is well read.
Definitely recommend this book!

I received a copy of this audiobook free and willingly offer this review.

Well researched and presented stories of crimes committed in and around San Francisco. It was very interesting and I learned about many crimes that I'd not known about before. The narrator did an excellent job and has an easy-to-listen-to voice. When it came to "quotes" he acted out the different speakers in a way that made it very easy to distinguish between men and women as well as the young and old. Nicely done.

Notorious San Francisco is a fascinating collection of stories documenting criminal activity in and around the city of San Francisco. Even if you're a fan of unsolved mysteries and crime documentaries you've likely never heard of all the thrilling narratives contained in this work. The narrator, Tom Jordan did a particularly great job with the telling, lending a shady, noir atmosphere that really brought the stories to life and made Notorious San Francisco an engaging listen. Throuagally recommended!

I loved listening to this book. It was so informational and a quite different type of thriller. Though not your traditional mystery thriller, it was nonetheless a wonderful whodunit. Most of the people covered I had never heard of but now am interested in learning more about the why behind their chosen wicked ways, especially the women. Nontraditional but fantastic!

What a great, interesting set of stories! Well compiled, well written (I liked the cooking recipe metaphors!)
This isn’t my usual category for books, but I’ve really enjoyed Tom’s performances before and he didn’t disappoint here either and I found myself completely drawn in with some of the tales. Tom’s ability to portray the intensity of the scenarios and his great character voices really brought the tales to life and make this a great listen.
This is my honest opinion of a free review copy.

San Francisco, a city founded in part by criminals, was once one of the most dangerous cities in America
20 plus compelling tales of serial killers, enjoyed the true crime
must read as wells great audio