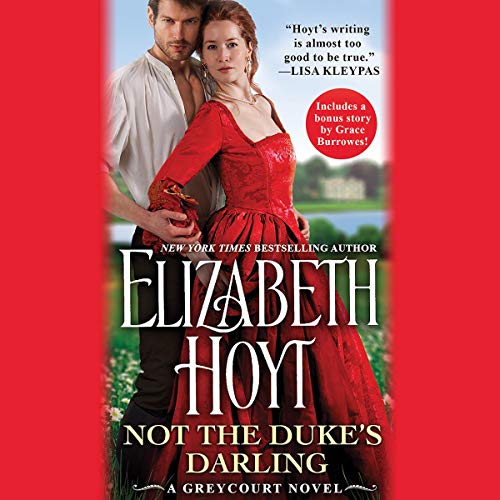 Not the Duke's Darling

By: Elizabeth Hoyt
Narrated by: Ashford McNab
Try for $0.00

Freya de Moray is many things: A member of the secret order of Wise Women, the daughter of disgraced nobility, and a chaperone living under an assumed name. What she is not is forgiving. So when the duke of Harlowe, the man who destroyed her brother and led to the downfall of her family, appears at the country house party she's attending, she does what any Wise Woman would do: She starts planning her revenge.

Christopher Renshaw, the duke of Harlowe, is being blackmailed. Intent on keeping his secrets safe, he agrees to attend a house party where he will put an end to this coercion once and for all. Until he recognizes Freya, masquerading among the party revelers, and realizes his troubles have just begun. Freya knows all about his sins - sins he'd much rather forget. But she's also fiery, bold, and sensuous - a temptation he can't resist.

When it becomes clear Freya is in grave danger, he'll risk everything to keep her safe. But first, he will have to earn Freya's trust...by whatever means necessary.

What listeners say about Not the Duke's Darling

I have always been Elizabeth Hoyt’s biggest fan. But I must say this story I’ve waited forever for was not very good. The hero was a big wimp and the heroine was “I am woman hear me roar”. I’m really sad. I’ve listed the maiden lane stories as the best I’ve ever read. This story has big question marks as to the whole back ground. I gave it higher marks than it should have gotten because I love Elizabeth Hoyt. Who wrote this story??? Not her trust me. The sex scenes were “huh” and left me feeling really????? The only reason I continued was Ashford Mcnab was awesome as always. I’m going to return this one and I’m broken hearted about that !!!!!

This one was rough

I really wanted to love it as I have all of the other Maiden Lane books, and I especially wanted to hear Freya's story. But this book was all over the place. It's as though someone took Ms. Hoyt's random mental notes for the story as it was building in her head, and wrote a book in the random way in which they were written. There was no consistency, multiple weird plot lines, and a random character appears for seemingly no reason other than the probably lead in to the next book. Freya's character even began to annoy me with the whole perpetual waffling in what she wanted. That went on too long, in my opinion. I was very disappointed.

Not her best work

I loved the Maiden Lane Books and have just listened to them for the second time. This one was a big disappointment. The "wise women" arc was just lame to me and the heroine's extreme reluctance to lose her autonomy was too much. She didn't deserve the hero. Two many plotlines were unresolved, obviously to set up future books, but that was frustrating. I hate to leave negative reviews but this was just not that good.

This was a good story. I enjoyed it. I liked Freya, she was smart, witty and a strong female lead. I liked Harlowe too, Him and Freya made a good match.

The story line was fun and enjoyable. I liked that it wasn't full of angst and misunderstanding's like some HR books are. That was a relief. There was a lot of great dialogue throughout the entire book.

I enjoyed some of the secondary characters, especially Arabella. LOL she was always scheming some sort of plan.

As for the narration, it was fantastic. I am a big Ashford McNab fan and she always does a great job on the male voices and gives everyone their own distinct voice, She has a great reading voice too.

I like most of Elizabeth Hoyt's stories and this is no exceptions. I like how she weaves fairy tales into the beginning of chapters, kinda giving you two stories for the price of one. I like how the male love interest is really a pretty nice guy, not so sure how much of a Wise Woman the female love interest is, she often does pretty stupid things and constantly gets herself into hot water. She is smart enough to solve the major mysteries in the story though so that was fun.

Freya, was driving me crazy!! Why is it that some women think so much and be so annoying?? My God!!! She was making bored and not enjoy the book at times.
At times I feel like feminism is our biggest enemy instead of our allied.
I will get the next book, but if it's anything like this one... well, I will be very disappointed!!

Great story, but I couldn't listen to the end due to the narration.

I usually enjoy all of Hoyt’s nooks but this one left me rather tired. The story line was rather simple and most of the dialogue revolved around whether the heroine would end up with the hero or vice versa. The narrator is very good if overly dramatic.

Elizabeth Hoyt is one of the authors that helped me realize that historical fiction is indeed a genre that I DEEPLY enjoy. In fact, even though I preordered Not the Duke's Darling as early as I could and received it on its release day, I waited quite a while to read it - as I have read all of her other published works (that I know of), it was the last new-to-me book from her and I wanted to prolong the experience. I went "full immersion" with it and went back and forth between the book and the audiobook and it was (as always) a truly delightful experience. Elizabeth Hoyt knows how to create such strong characters, but she gives such respect and power to her heroines and it's an aspect of her work that I truly adore. Freya and Christopher's story is such a wonderful introduction to the Greycourt series and the way that the author laid out clues and hints for the continuation of the series is genius. I can't wait to see how the mystery unfolds and the villains unmasked. Add to that the utter sexiness, wit, and emotion that permeates the story; I will admit that it is not my favorite book from Elizabeth Hoyt (though honestly, I do love them all so much that having to choose a favorite one would be like being forced to choose a favorite child), but I did really enjoy it nonetheless. 4.5 out of 5 wine glasses.

Elizabeth Hoyt never disappoints me. This is a great start to a new series, and I can't wait to find out more of the mystery of what happened to Freya's brother. I hope this is a long series since there are so many characters in it already that I would like to see get their own books. Hoyt's historical romances are always so suspenseful and exciting to read (or listen to). Her world building draws you in and makes you want to live there. I love her mythology of the Wise Women and Dunkelders.

As always, Ashford McNab is excellent. She's my favorite single narrator, especially for historical. She is wonderful at accents and men's voices. I especially love her Scottish accent in this. #HistoricalRomanticSuspense