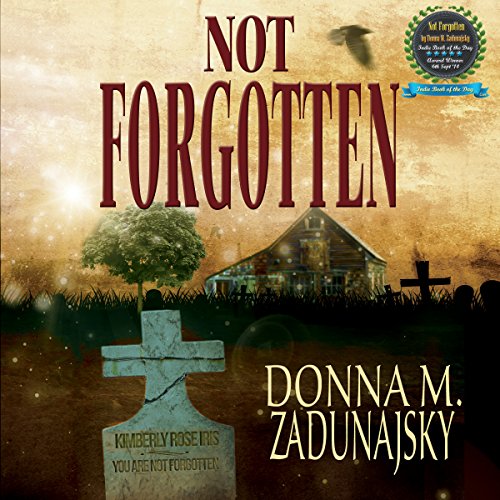 By: Donna M. Zadunajsky
Narrated by: Margaret Glaccum
Try for $0.00

Not Forgotten was awarded Indie Book of the Day, September 6, 2014.

Twenty-six years later, Deanna Iris and her son, Brent, move back to the town she grew up in--back where her secret began and her life changed forever.

As she is unpacking boxes, she receives a call from Officer Bates, stating her sister and son have been taken to Mendota Community Hospital after being critically injured in a car accident.

Sitting with her son, who is unconscious, and her sister, Sheila, who is in a coma, Deanna meets their doctor, who reminds her of someone she once knew. Could it be possible that Dr. Sheldon is her daughter, who Deanna was told died minutes after being born?

After meeting her old friend who knows about her secret and is later found murdered, Deanna receives a note in her mailbox ,telling her to leave town or she will suffer the same fate. What transpired all those years ago, and who is the mysterious woman she spots as she drives by her sister's house?

Will Deanna ever allow herself to be loved and to let go of the past? Or will searching for the answers lead to her death?

What listeners say about Not Forgotten