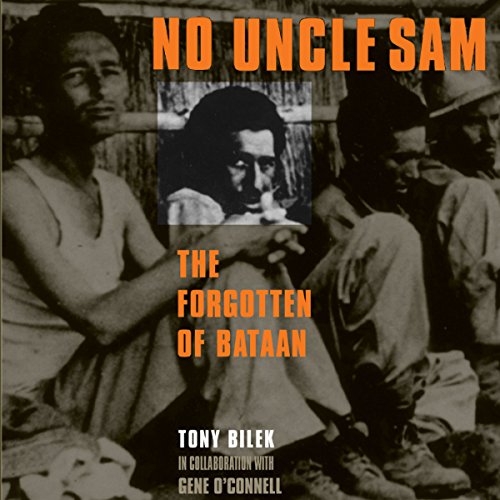 By: Tony Bilek,Gene O'Connell
Narrated by: John Stamper
Try for $0.00

On April 9, 1942, Gen. Edward King, commander of the Fil-American forces in Bataan, surrendered to the Japanese. To this day, it remains the largest American army in history to surrender, numbering more than 70,000 Filipinos and Americans. After the surrender the Japanese marched their captives to different locations in what became known as the Death March, a 55-mile stretch from Mariveles, Bataan, to San Fernando, Pampanga. Thousands of soldiers died in the march; some were shot by their captors and others succumbed to disease, starvation, or painful dehydration.

Anton F. Bilek was only twenty-two years old when he was captured in Bataan. No Uncle Sam is his story of survival through the Death March, his imprisonment under horrific conditions in the Philippines and Japan, and his servitude as a slave laborer in the Japanese coal mines. Bilek addresses the frustration, anger, fear, humor, hope, and courage that he and other Americans shared during their captivity and their silence about these experiences for many years after their release from the POW camps. After almost 40 years Bilek decided to write about his experiences, and this memoir is the result. Those who are interested in history and the incredible resilience of human beings must read this tale of survival.

What listeners say about No Uncle Sam

Tony Bilek writes an interesting book of his time in World War 2, as a POW in the Philippines and then Japan. It shows that war is hell. He was part of the USA military force that surrendered the Philippines in April 1942 and then was marched 100km in what is known as the “Bataan Death March”. Malnourished, mistreated and surrounded by disease it was a horrid time. I have read a reasonable amount of WW2 stuff, including things about the war in the Pacific (generally focused on Singapore, Australia and/or PNG), but the Bataan Death March was not something I knew about.

I think it is the stories like this are sometimes missed, overshadowed by things like the German concentration camps and ‘exciting’ war stories like Operation Overlord. But they are important to tell and important to know about. I hope this book gets to be better known and well read, because it is important. Not to mentioned well written, engaging and does a very good job of explaining how the soldiers involved in these events felt. He conveys the suffering but also the hope and lighter moments within that disperse. The things that kept them going. He shows the comradery and the way that the solider’s would help each other out and support one another despite their own problems. The book shows some of the best and worst of humanity.

It will say this about what Bilek went through: maybe it is the way he writes about it (while not avoiding anything, not giving any really graphic descriptions, showing those moments of hope, and the occasional ‘good’ thing that happened) but the events that he went through don’t seem as horrid as some of those that I have read of other POWs (things like some Jewish concentration camp accounts I’ve read or Burma Railway survivors). That said, it is still extremely horrible. To say it “doesn’t sounds as bad” is like the difference between a 9 Richter scale earthquake vs a 8.8 Richter scale earthquake, compared to the normal ‘maybe a slight earth tremor’ day, both are really bad and something I wouldn’t wish on anyone.

There were minor things that annoyed me, such as Bilek makes a statement of “it was three months since the war began” in early 1942. It was 3 months since the USA officially joined the war, but not 3 months since it began. That had happened years earlier. I know what he was trying to say but it wasn’t what was said. Things like this were minor, but they were there.

The narration was very good. Stamper conveyed that despair and hope. Occasionally some parts fall a little short (I think there was an aussie accent at one point that I felt wasn’t very good) but for the most part it was a solid performance. Certainly nothing ‘wrong’ with it. Sound production was also very good.

Overall, I would certainly recommend to those who are interested in history and the experiences of soldiers in the Pacific theatre.