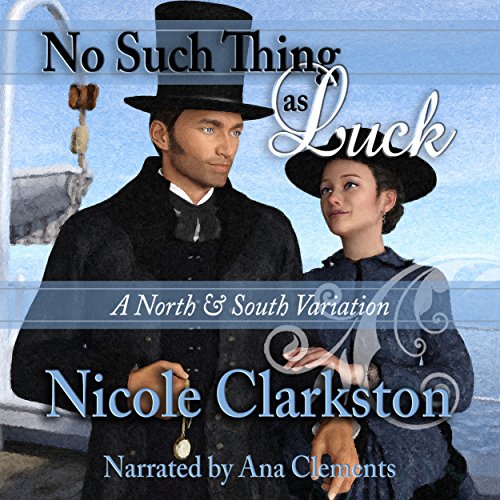 A North and South Variation
By: Nicole Clarkston
Narrated by: Ana Clements
Length: 14 hrs and 10 mins
Categories: Romance, Historical
4.5 out of 5 stars 4.4 (54 ratings)
This title is included in Audible Escape

John Thornton is facing the collapse of everything he has worked for all of his life. Through his banker, he hears about a potential business opportunity that could save the mill. He decides to investigate, even if it means traveling from home when he can least afford it.

Margaret Hale, now living in London, learns that her godfather Mr. Bell is visiting her brother Frederick in Cadiz. Bell is dying, and asking to see her before it is too late. She is determined to sail, regardless of the risk.

An accident on the docks leaves Margaret injured, and throws both together on the same ship. Thornton, resolved to protect Margaret's honor despite their painful history, claims to be her brother to keep her safe. Unfortunately, pretending to be Margaret's brother proves more difficult - and more dangerous - than he might have expected.

I listened to the audio book and this story is a must read or listen to. John Thornton, who is travelling to Spain to save his mill, runs into Miss Hale who is also travelling to the same location. She is injured and travelling alone, so Mr. Thornton travels as her brother. We get to know John's mother , Hannah more thoroughly as well as Frederick (Margaret's brother) and his wife. I fell in love with the honorable, honest, strong John Thornton more than ever during this story. It was so well put together. I recommend this to anyone who loves Darcy, yes Darcy, as he is a Darcy in a later age. The narrator Ana Clements did a phenomenal job bringing the characters to life and brought out the nuances of the story with such skill. I highly recommend the audiobook and highly recommend this story to lovers of JAFF and Darcy.

What did you love best about No Such Thing as Luck?

With a voyage, an accident, an exotic location, a villain, a fist-fight, a wedding, a death, a fugitive, the threat of execution, and plenty of steamy make-out sessions, NSTAL makes a fine plot for a blockbuster film. I loved that Margaret and John rediscover each other in locations foreign to them. It's adventurous with a dash of danger. I loved the flamboyant villain, Jiro. Jiro’s machinations only prove John to be the the brave and selfless knight in shining armour we know he can be, and who doesn’t swoon at that? We’re also introduced to some new characters on the voyage, and we meet Frederick and his family in Spain. Plus, there's plenty of John and Margaret makeout sessions!

There can be too much of a good thing though. For me there was a bit too much kissing too early in the story. Part of the fun is the angst, so I would have preferred a slower burn.There’s also a bit too much plot. There's a lot of action, which can actually be a great thing for most readers, but I’m old-school so I prefer to explore a character's inner world a bit more.

What does Ana Clements bring to the story that you wouldn’t experience if you just read the book?

Ana Clements is an accent wizard, seamlessly transitioning from Northern to Southern, Spanish to French. She brought the right touch of tenderness and heat to John and Margaret's more intimate moments. I found her tone and rhythm relaxing. She definitely gets a thumbs up from me.

Yes, I laughed at several places. But if you've read Nicole's books, that's to be expected. :)

Sweet story, though it went on a bit too long...

No Such Thing as Luck by Nicole Clarkston is the story of Margaret Hale and John Thornton. Miss Hale is injured while about to set sail alone on a large ship. Mr. Thornton, with whom she had previous dealings with (and feelings for) is also aboard and once he realizes that she is traveling alone, takes it upon himself to act as her brother to ensure her safety while keeping her reputation intact. They get found out and without giving away spoilers, this is their story.

I have to say, I really enjoyed the book in the beginning. Now, this is a longer novel at a little over 14 hours. I only listened to about 8.5 hours of the story before giving up. I was just bored. Obviously, you can see that I am in the minority by the other reviews here, but this book just wasn't for me. The characters were likable, but I just think that for such a long story that it didn't progress fast enough for me.

Ana Clements did a very good job narrating this tale. Her reading accent fit perfectly with the time setting that the story took place in. Her diction was great and she brought life to the characters. I was voluntarily provided this free review copy audiobook by the author, narrator, or publisher for an honest review.

The story was very well written, even though the romance was a little over the top, but it was the narrator who truly impressed me. I was astounded by the extraordinary performance. in fact, I only decided to read this book after hearing her narration of another book. she is probably the best narrator on Audible, IMO, right after Alex Wyndham. I will be looking for more of her books.

love the story and how the characters have spunk

this is one of my favorite variations on north and south. characters are true to the original, keeping their spunk and fire. very believable situations and its fun to see a softer side of john Thornton when he finally gets his girl :)

What a beautiful way to spend more time with the characters I've come to know and love! A solid story that stays true to the characters created by Gaskell. I'll be revisiting this for some time to come!

Great narration of this North and South variation

I had read this book on Kindle earlier and I liked it a lot. So when I got the opportunity to listen and review it I couldn't resist.


I was voluntarily provided this free review copy audiobook by the author, narrator or publisher.

I really loved this historical romance! Very well written with great characters, an interesting story and fantastic narration! I highly recommend this one to anyone who enjoys historical fiction!

No Such Thing as Luck: A North and South Variation
: Nicole Clarkston


I need to say from the begining, I have not read the original book by Elizabeth Gaskell. As others have stated this is a fan fiction. I must say that it took a bit to get into this book, but once it took off it was quite enjoyable. The listener gets to experience suspense, drama, romance, travel, and much more in this historical fiction. The characters were easy to like or dislike as in the case of a few. I need to go back and read the original work.


The narration was well done. The characters were well portrayed. Ana Clements voice and accents were enjoyable.

What did you love best about No Such Thing as Luck?

I really enjoyed listening to this book. I haven't listened to many Victorian Romances (mid 1800's) but found this one to pull me in. I thought the story was very well written and the imagery was fantastic.

John Thornton and Margaret Hale were both favorites of mine. I loved Thornton for how chivalrous and honorable he was. He was willing to sacrifice so much.

What does Ana Clements bring to the story that you wouldn’t experience if you just read the book?

Ana Clements was able to perform so many characters with distinguishable voices and accents.

I loved the ending when Margaret met Mrs. Thornton

I was provided with this review copy audiobook at my request and voluntarily wrote this review. On a side note regarding the production of this book, I thought the breaks between chapters was too long of a pause. The first few times I even checked my device to see if it was still on. The long break does not reflect on the author or narrator, but it was annoying. I did not let it detract from the story.

I'd recommend this for fans of North and South as the story is very sympathetic to the original book. The characters felt very true to their counterparts in the original version and I could easily picture them in my mind's eye in this variation.
I felt that the narrator's performance of Mr. Thornton sounded very monotone in the beginning but I soon got used to it. I liked the subtle northern accent which was well done.
I loved the story line and I wouldn't hesitate to buy more from the author.

I really enjoyed listening to this book. I haven't listened to many Victorian Romances (mid 1800's) but found this one to pull me in. I thought the story was very well written.

John Thornton and Margaret Hale were two endearing characters. I loved Thornton for how chivalrous and honorable he was, and for what he was willing to sacrifice.

Regarding the narrator, Ana Clements. I was impressed with her multitude of various character voices and accents she performed. I love it when a narrator has distinguishable characters.

One of my favorite parts of the book was near the ending when Margaret and Mrs. Thorton met at White Chapel.

I was given a copy of this audiobook and selected to write my review. I will definitely look for more books by both the author and narrator.

A great story with a lovely romance

Would you listen to No Such Thing as Luck again? Why?

I would as Ana Clements narration was such a pleasure to listen to and beautifully let the story unfold.

The narrator has really captured the feel of this book and her characters really came to life with the different tones and accents she used. It was a pleasure to listen to her and I look forward to hearing more.