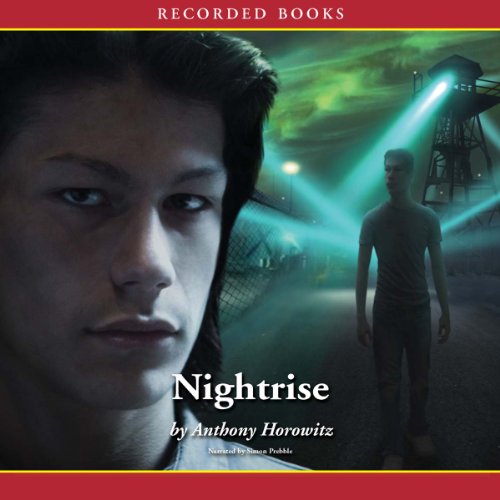 By: Anthony Horowitz
Narrated by: Simon Prebble
Try for $0.00

A gate has been opened. The Old Ones have been released. And now the third and fourth of The Five -- twins with a mysterious psychic bond -- are joining the fight....

With Nightrise, he amplifies the suspense as an evil group strives to imprison and control the psychic twins, Scott and Jamie.

What listeners say about Nightrise

Out of the first 3 books, this one displays elevated danger and heightened urgency for the The Five to survive the shenanigans of those working for the Old Ones. Also, we get a glimpse into the trie power of The Five.

My favorite part of this boom is how the focus was on others within The Five instead of Matt.

it's slow and a brand new start but got way better

slow start that got more familiar and better as time went on. i can't wait to hear the last 2!

Unexpected storyline added to the drama of this book in the series. Narrator does an excellent job.

good read. looking forward to the next book.

good book. looking forward to the next book. night rise and the political issue sound like 2018 headlines.

Would you listen to Nightrise again? Why?

Yeah. Perhaps to see if I missed anything on my first listen. The narrator is great, too.

Would you recommend Nightrise to your friends? Why or why not?

Its a good book (see my additional comments). This book tries to bring the series together a bit.

Which character – as performed by Simon Prebble – was your favorite?

No. This is a really good series, but of all the books, this one dragged a little bit for me. Not enough to hinder me from continuing with this book, or the next one, however. This is good stuff.

Anthony Horowitz is one of my favorite modern writers. His greatest strength, or, what resonates with me most, is when he is writing something slightly creepy, mysterious, and ominous. He is VERY good at that, and I can't get enough of it. That is what originally drew me into this series. In book one, Raven's Gate, he really created a haunting ambiance to surround his wonderfully creepy-cult-characters.

Unfortunately, since the first book, we only get bits and pieces of that. But, when we do get them, they are really good pits and pieces.

Don't get me wrong. This is a very good series. Each book introduces us to another one (or more than one) of "The Five." "The Five" consists of five teenagers that are destined to protect the world against The Old Ones - a race of creatures that are the stuff of ancient myth, and legends.

Book 3, Nightrise, follows two of "The Five," in Jamie and Scott Tyler, twin brothers that share a special connection with each other, and the power to strongly influence others.

Book three's story begins with the brothers performing on stage during a magic act. As the stars of the show, they perform fantastic tricks. For example, one brother seeing something on one side of the room, and the brother other telling him and the crowd what he sees without seeing that something himself. It is this moment when we start to understand how Jamie and Scott are connected, but only on the surface. They can, in fact, do much more. This won't be revealed until later in the story.

It is, at this same performance, that several men have come to validate the claim they've heard - that Jamie and Scott Tyler have special, unexplained powers. We learn, during one of the audience ticks - one brother seeing a business card in the audience, and the other brother saying what he sees from the stage - that these men represent the Nightrise corporation. Later we learn that its a company that is aware of The Old Ones, and collects children with special gifts.

Once convinced of their power, these two men meet up with Jamie and Scott's guardian, the man who produces the show. We also learn that he called Nightrise, and that he's willing to sell his boys for around a few hundred thousand dollars.

After the inciting incicent, we follow the boys as they are captured, then get away, and then separated. We learn more about them, and their destiny as they do.

For me, this was the book that started to try to link all the separate storilines together. There not only is some mention of Matt and Pedro (two other boys of "The Five,") but there is a whole sequence of dreamworld battle that I found to be quite a bit confusing at first. This might be partially because I was listening to the audiobook version of the book, but the story seemed just kind of jump storilines. Once I realized what was going on, it was helpful to put everything in context across multiple books, multiple characters, and multiple universes(?)

While I've shared some of the early plot points, I won't reveal any of the key plot points to this book, or some of the critical information that connects the books across the series. I will say specific to book 3 that there is definately a vein similar to Stephen King's, The Dead Zone - at least in a reverse, round about sort of way. For more on that, you'll have to pick up the books :)

All in all, this is a good book and a very good series. If you like action, suspense, with an occasional bit of creepy ambiance, this book would be worth checking out.

If you've Nightrise, let me know what you think in the comments!

This one is pretty consistent with the first two - if you enjoyed them you'll probably like this one. Not much else to say, really.

Horowitz & Prebble serve up more of the same Gatekeepers story that we've come to know and love. Not a classic in the sense that I think people will be reading it in 100 years, but a lot of fun. All of Horowitz's many books are favorites of my son, who at age 7-8 was a reluctant reader, but who is now at age 11 a very avid reader.