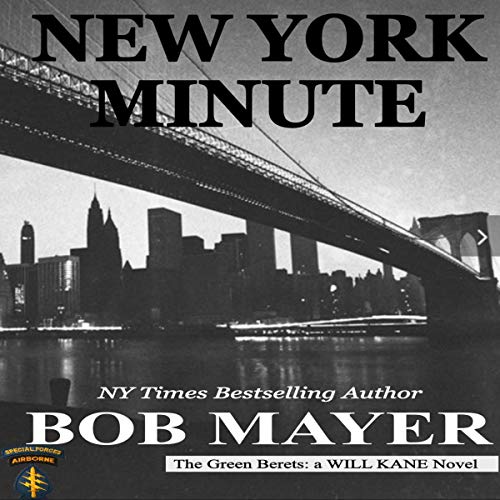 The last time former Green Beret Will Kane was involved in killing someone it made the cover of LIFE Magazine.

Eight years later he’s getting pushed to the edge of that precipice he vowed never to go over again.

On the dark streets of a city the rest of the country believes is going down the toilet, Vietnam vet Kane’s life mirrors his hometown.

Carrying a past cratered with death and tragedy, Kane has been working as a "fixer" for a high-priced lawyer since returning to New York in disgrace. But is he really fixing anything?

It begins when he takes a compromising picture as part of the job. As the long hot summer boils, so does Kane as the mob, the CIA, the IRA and other forces are brought to bear on him. What they all seem to have forgotten, and Kane wishes he could, is that he is a highly trained and experienced warrior.

Kane faces threats, betrayal and shadows from his past, and then, on 13 July 1977, the Blackout occurs and Kane explodes.

For fans of the Green Beret series of books, Dave Riley makes an appearance as Will Kane's 17-year-old cousin.

This may be one of my favorite entries in Bob Mayer's Green Beret series. New York Minute introduces new characters in a time and setting that predates the author's previous works. It's an on the edge of your seat read with an ending that has me eager to see what is in store next for Will Caine and company. If you're a fan of military thrillers or mob stories, then this is a book you don't want to miss!

Will Kane is awesome! And some serendipity?

Today is 7/15/19, and I finished this audiobook a few days ago. I wanted to write a more positive review than some of the ones I've seen... and I wanted to point out the coincidence between this book and current events (power outages).

Long story short... Will Kane is what Jack Reacher wishes he could be. If you like this genre, then by all means get this book. Personally, I can't wait for the next in the series to comes out, because I want to know more about what made Kane into the person he is 'today' (today being 1977). I also want to know how the Son of Sam plays into the story!

From a more esoteric point of view, things have changed. Personally, I'm on the cusp of ages... I remember back in the day when a phone book and corded phone was how we communicated. Toilet overflowing... need a plumber? Thumb to the yellow pages and start calling. It really was a different time. On the other end, I'm also young enough to be well integrated into the digital age. Reading a story set in 1977, really puts some of this into perspective. Spycraft was a whole 'nother ballgame when people were truly 'isolated' by a lack of instantaneous communication.

And... to boot, the story really contrasts with where we are as a society now compared with then. New York Minute's culmination comes on the night of the Great Blackout in NYC. The setting is essentially anarchy in the streets. Fast forward 42 years (to the day) and another blackout strikes. Instead of anarchy, the stories coming out of NY are of concerts in the streets, impromptu plays, and citizens volunteering to direct traffic.

At the very least... it's worth reading/listening to realize that as bad as things are today, we do seem to have made some progress as a society/community!

I have read the Green Berets series and longed for continuation. Now I noticed that New York Minute is published in Audible format before Kindle and decided to give it a try. The story was good and did not leave me disappointed in any way but I found the narrator somewhat uninteresting - at least initially. I just love Bob Mayer's style to describe things and characters that makes me listen to (or read) "one more chapter" and I am definitely going to buy the book too once published.

great book brought back memories from me growing up in NYC. I worked for NYC-EMS during that time as a paramedic. I remember the black out in 1977 too. great book Bob.

So boring, so descriptive .nothing ever happened. Do u really want to know the length of ash on end of cigarette that someone is smoking..title sounded exciting..not!