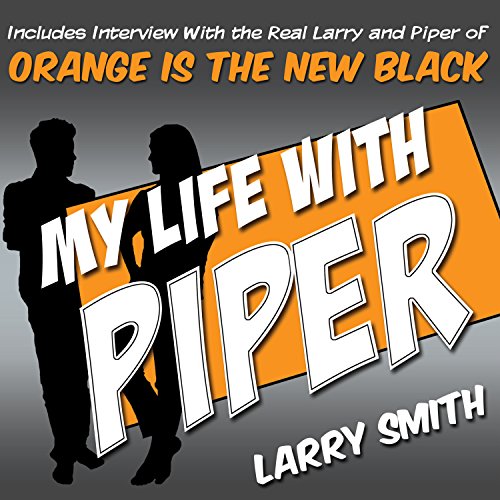 My Life with Piper

My Life with Piper

Piper Kerman's bestselling memoir and hit show on Netflix has been one of the most remarkable pop culture phenomenons in years. Yet there's one side of the story that until now hasn't been told-the story of Larry Smith, the man who has stood by Piper through the worst of times.

Orange Is the New Black is about many things: crime, punishment, a community of women who gave each other strength in the worst of times. But it is also a love story. Now, for the first time, the "real Larry" tells his side of the story with vivid color and unapologetic candor, taking us back to his first meeting with Piper, their unexpected courtship, the moment both of their lives changed forever, and the unexpected celebrity that came with having a version of their lives streamed to millions of people across the world as Orange Is the New Black captured the cultural zeitgeist.

Includes an exclusive Larry and Piper interview and Larry's reaction to Jason Biggs being selected to portray him in Orange Is the New Black.

This is a very fun short listen that brings Orange readers full circle. Have read Piper's book as well. This makes me want to reread it.....something I seldom do. Also really a great look into the differences between the books and the screen adaptation.

Not disappointed at all! Great listen!

I love personal narratives. Larry Smith is a writer by trade and also a lover of personal narratives. He runs an online magazine where he invites the every day person to tell their own stories and then publishes them, so it should come as no surprise that he did a great job telling his own. Just as with Piper's book, I enjoyed learning about the differences between the NetFlix series, Orange is the New Black, and the true/real life lives of Piper and Larry.

At first, I have to admit Larry's voice (he narrates his own story which I think is GREAT) annoyed me a little for maybe 5-10 minutes. However, I quickly became engrossed with what he had to say and it ceased bothering me at all for the remainder of the book - he did a great job. It was also great to learn both from this book, and Piper's book, that the real life Larry is a pretty great guy, and has a fabulous sense of humor.

The audio interview at the end of the book with Piper Kerman and Larry Bloom is also very interesting. The journalist interviewing them asks a lot of questions about their real life and what actually happened, which, again, is something I love. After hearing Piper speak throughout the interview I wish she had narrated her own audio book as well. She disagrees feeling people wouldn't like her voice, but I digress. The woman who read Piper's book did a great job.

I highly recommend this book and Piper's book, especially if you are interested in much more accurate accounts of what really inspired the NetFlix series.

What made the experience of listening to My Life with Piper the most enjoyable?

I'm sure anyone who spends a credit on this purchase must be a fan of the original book or the netflix program. This serves as a neat companion to the original.

It was interesting to hear the 'real' Larry's perspective on Piper's incarceration.

Way to short not much else to say!

Same.... way too short! Why spend so little time on a book when hers was so great!