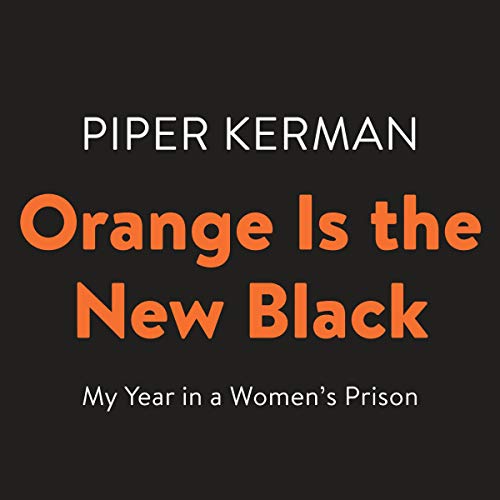 Orange Is the New Black

By: Piper Kerman
Narrated by: Cassandra Campbell
Try for $0.00

With a career, a boyfriend, and a loving family, Piper Kerman barely resembles the reckless young woman who delivered a suitcase of drug money 10 years before. But that past has caught up with her. Convicted and sentenced to 15 months at the infamous federal correctional facility in Danbury, Connecticut, the well-heeled Smith College alumna is now inmate #11187-424 - one of the millions of people who disappear “down the rabbit hole” of the American penal system. From her first strip search to her final release, Kerman learns to navigate this strange world with its strictly enforced codes of behavior and arbitrary rules. She meets women from all walks of life, who surprise her with small tokens of generosity, hard words of wisdom, and simple acts of acceptance.

Heartbreaking, hilarious, and at times enraging, Kerman’s story offers a rare look into the lives of women in prison - why it is we lock so many away and what happens to them when they’re there.

“Fascinating.... The true subject of this unforgettable book is female bonding and the ties that even bars can’t unbind.” (People, four stars)

“I loved this book. It’s a story rich with humor, pathos, and redemption. What I did not expect from this memoir was the affection, compassion, and even reverence that Piper Kerman demonstrates for all the women she encountered while she was locked away in jail. I will never forget it.” (Elizabeth Gilbert, author of Eat, Pray, Love)

“This book is impossible to put down because [Kerman] could be you. Or your best friend. Or your daughter.” (Los Angeles Times)

“It’s a compelling awakening, and a harrowing one - both for the reader and for Kerman.” (Newsweek.com)

"Kerman neither sentimentalizes nor lectures. She keeps the details of her despair to a minimum along with her discussion of the outrages of the penal system, concentrating instead on descriptions of her direct experiences, both harrowing and hilarious, and the personalities of the women who shared them with her." (Boston Globe)

What listeners say about Orange Is the New Black

The show is better

OITNB the book is different than OITNB Netflix version. I like the book better, it's a happier story of women helping women in a bad situation (prison). The characters are sometimes the same, but much of the narrative is changed. The Narrator sounds like the actress that plays Piper Kerman in the series (it isn't), If you are interested in how a book can be vastly changed for the entertainment on TV, this will play it out. Characters that had major parts in the series are generally misinterpreted completely as a thing in the series whereas the book just mentions them in passing. I liked this book better, it leaves you in a good place on the human side of things. These women care and help each other get through a hard time. And the guards aren't complete idiots.

I really liked the book, and I’m so glad that I got it, and was able to hear the original story. The only problem I had with it was the way the narrator talked, and pronounced words. It drove me NUTS! She has this weird way of over pronouncing, and drawing out her A’s, along with the end of each sentence. I couldn’t tell if she just had an accent, or if she was making one up for Piper, but whatever it was, it didn’t work. Lol Aside from all that, it was really good, and I would still recommend it! :)

Maybe my expectatives where high...

Hard to keep it to the end cuz... I keep losing interest in the narrative.

Like the TV sitcom, Green Acres (fancy New Yorker wife follows her husband to live on a farm), ONB also entertains with an unlikely pairing. Because of one foolish choice Piper made as an ignorant & thrill seeking teen — tens years prior, she lands a 1 year sentence in a minimum security facility. Despite her upper class existence, education, and otherwise clean record, Piper surprisingly connects with veteran inmates, most of which come from drastically different backgrounds. Her story illustrates we too, can discover there’s more in common among people than not — should we be willing (or court mandated) to invest the time. The performance is outstanding!

Well written. Endearing and enlightening for anyone who has not experienced the correctional environment.

Well written. Endearing and enlightening for anyone who has not experienced the correctional environment.

I completed binge watching the show on Netflix and then listened to the audiobook. I enjoyed both. Different mediums, different experiences.

one of the best books I've ever read

enjoyed it very much, I couldn't stop reading. the most memorable part is when Piper seen Nora for the first time in 11 years.

Just as good as the show!

Just finished Orange is the new black book and finished the Netflix series about 3 weeks ago. The book was soooo good! So thoughtful and thought provoking. It kept my attention from begging to end. Highly recommend this book.

a story from behind bars

A well written story and reading. An interesting point of view worth reading. If you are looking for a quick easy read this is a book for you.