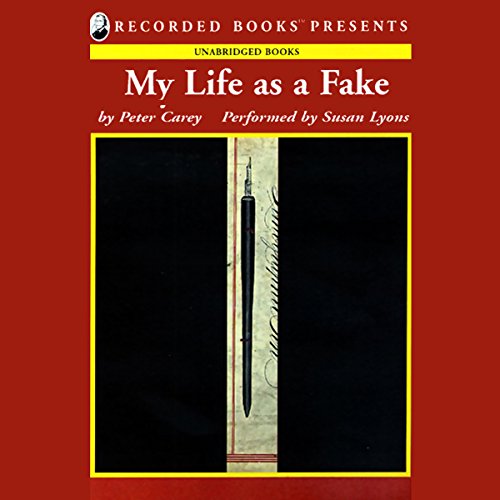 My Life as a Fake

My Life as a Fake

Two-time Booker Prize-winner Peter Carey, author of True History of the Kelly Gang, shows again why he is one of the most acclaimed writers in the world with this ambitious novel. My Life as a Fake is his brilliantly fictionalized spin on the greatest literary hoax in Australia's colorful history.

In the 1950s poet Christopher Chubb composes a body of sexually charged poems. Chubb then dupes a trendy literary magazine into believing the poems were composed by the late Bob McCorkle, an undiscovered genius. But the trick backfires, and soon Chubb finds himself tormented by the very monster he creates. Decades later, a literary editor named Sarah Wode-Douglass begins peeling back the layers of the Chubb mystery in, of all places, Malaysia, where the reclusive poet remains in hiding.

With its breathtaking scope and limitless inventiveness, My Life as a Fake is a triumph of the imagination. Carey's masterful tale receives a sparkling narration by Susan Lyons, who provides authentic and compelling voices for the full cast of vivid characters.

"Hypnotic novel of personal and artistic obsession....The tale is a tour de force....As so often before, this extravagantly gifted writer has created something bewilderingly original and powerful." (Publishers Weekly)
"Delectably suspenseful and wildly inventive, Carey's spellbinding modern Gothic is a shrewd and seductive inquiry into the diabolical dimension of the imagination." (Booklist)
"A Nabokovian masterpiece." (Kirkus)

Wow, what divergent opinions about this book – that tells you something right there. I am on the “really liked” side of the fence. Yes indeedy, the novel is unbelievable – more power to it. It is fiction – not biography. The writing is good, the characters (although overshadowed by the plot) are interesting, and the plot is intriguing. This is my second Peter Carey novel (“Jack Maggs” was my first). I liked “Jack Maggs” but enjoyed “My Life as a Fake” significantly more. This is a very odd book and is likely not for everyone – it isn’t a light summer read. The story is a bit dark, but still endowed with humanity. I truly loved the ambiguity of all of the characters. The impossibility to connect with the characters is (oddly enough) one of the most surprising and endearing charms of this book.

I find Carey's writing captivating in its ability to evoke totally the world of its main characters, and this book has that quality in spades. The feel of Sarah's obsession with Chubb's story and even the smells and sounds of Malaysia swept me up and carried me through a pretty dark story. This reader gives theatrical life and character to the voices of the book, rendering a play-like quality that I found convincing and very pleasurable to listen to. This was one of those books that, despite its darkness and mystery, I was sorry to stop "living in" when it was over. I felt I had visited another country both metaphorically, through immersion in these very original character's minds, and geographically, through the extraordinary evocation of place.

I'm still not quite sure what to make of this novel, which I found irritating and yet oddly compelling. None of the characters, most of whom are "fakes" to one degree or another, is appealing, but their stories (and there are stories within stories within stories here) are intriguing. The literary mystery that drives the plot kept me listening to the end, despite some stomach-turning plot twists and the posh British narrator, whom I found both annoying and yet perfectly cast as the obsessive central character. It's that kind of book: not exactly likable, and yet engaging. Peter Carey, winner of two Booker prizes, is a terrific writer.

Wow I am glad that is over

When you pay the $15/mo membership, you feel like you must listen to everything you buy. I really wish that I had that 10 hours and month's credit back.

Yes. Peter Carey is a beautiful writer - the book is worth it just for the skill Cary demonstrates. It's colorful and strong on sense of place. Use of language and in particular slang is superb. But best of all is Susan Lyons' narration. Hard to believe anything could improve Peter Carey, but she did it. I thought her reading was a tour de force.

The narrator's performance combined with the colorful, fanciful story. Which, by the way, is wickedly funny.

What does Susan Lyons bring to the story that you wouldn’t experience if you just read the book?

I would never have heard the accents, some of slang I would not even have known how to pronounce. She seems to move with ease from posh British to slangy Aussie.
Also, Carey doesn't use quotation marks, which I find offputting to read. WIth Lyons doing the work, I didn't have to wonder who is saying what. Her voices for each different character were so distinctive it was obvious who was talking.

She's so marvelous that I'm looking for other books narrated by her. She read the female part in Peter Robinson's newest, Before the Poison. I didn't like that book, but Lyons's performance was the one thing I did like.

I would have if I could have. I certainly switched on my iPod every minute I had the chance. I also often rewound to hear parts again because I got such a kick out of Lyons.

The plot concerns bickering between poets, and between poets and editors. The whole thing is overdone and senseless. Not at all recommended

This book was not worth the time investment. The characters and plot were unbelievable and it was impossible for the reader to connect with or care about them. I appreciate the author's efforts to make the language and dialogue "authentic" and the narrator's use of various accents, but all the little colloquialisms were annoying and distracting. I was listening to this book while we were on a road trip and I was usually glad when I could manage to fall asleep through parts of the book!

Another Great Tale from Carey

After Parrot and Olivier in America I was ready to give up on Carey but My Life As a Fake restored my faith. This guy is above all a great storyteller and a great dream weaver. Each novel creates world that is at once strange yet convincing. And different from one book to the next.

Peter Carey based My Life as a Fake on a real incident in Australia where a writer perpetrated a hoax by publishing the poems of an individual he claimed was dead, but never really existed. While the actual incident would be interesting enough, Carey takes this further by have the supposedly imagined poet show up in the life of the individual who created the hoax.

The story is told by Sarah - the editor of a London Lit journal who has followed another writer, Slater to Malaysia. Slater, knew Sarah's mother and part of her reason to go there is because she wanted to know what really happened between Slater and her mother. That subplot is a perfect subtle way of getting the reader to question the narrator's reliability. Added to that, a layering of stories told to the narrator that sometimes include another told to them. The reader receives conflicting stories through this technique and one finds oneself wonder which is true.

Sarah, while in Malaysia, she runs into Christopher Chubb, the man who created the poetry hoax. He shows her a poem he insists is the work of Bob McCorkle, the supposedly made up poet. She realizes it is a brilliant piece of writing, but Chubb says he must tell her his story. His story is also told by Slater, giving the reader two different sides. As the story continues, Chubb tells his story, and the story of the hoax, of Bob McCorkle come to life, of his daughter, his lover, and the stories of others who help or hinder him along the way, as well as telling the stories they have told to him. We also hear directly from the daughter through the narrator and Slater tells Sarah versions of some events he participated in, heard, or witnessed that differ to the point that the are sometimes in direct conflict with what we learn before or after. The narrator herself begins to question things, but her own desires color what she chooses to believe. Slater also tells her what really happened to her own mother, even though she remembers it differently.

In the end, the narratives weave in and out, closer and further from the narrator and the reader is left to question what did or didn't happen - and is left to the reality that none of the characters are all that likable. Does a character's likability make it more like we believe their version? Sarah starts as likable, but as the story progresses I found her less and less so. Her obsession reflects that of Chubb and at least one version of McCorkle, and while the end is of course in question, one imagines she end up similarly.

It is rare to find a book where the characters aren't especially likable, yet My Life as a Fake is wonderfully engrossing. Carey does an excellent job at recreating post-war Australia, and 1950's and 70's Malaysia for the readers, and in creating engaging characters that are fully drawn if not particularly sympathetic. I found that even though the story was being told to the narrator, each of the characters in any given story had their own voice. He also has created a sort of literary Frankenstein in Bob McCorkle that keeps the plot moving and building to the shocking end. The story is action packed and full of vivid details — an impressive feat when you realize that during the course of the narration, only a short time passes in opposition to the decades the stories told to her take, and, other than moving from place to place where characters meet and the story is revealed, there is little real-time action.

Carey's characters are epically flawed - they are greedy, selfish, amoral, and vengeful (often for slights perceived as far worse than most of us would see them) and more often than not under the sway of one of those flaws, although they cannot see it, even when reflected in others they accuse of the same. While the end is shocking, it feels inevitable and unavoidable, and the sadness is not for the consequences, but rather for the fact that they couldn't see it coming.