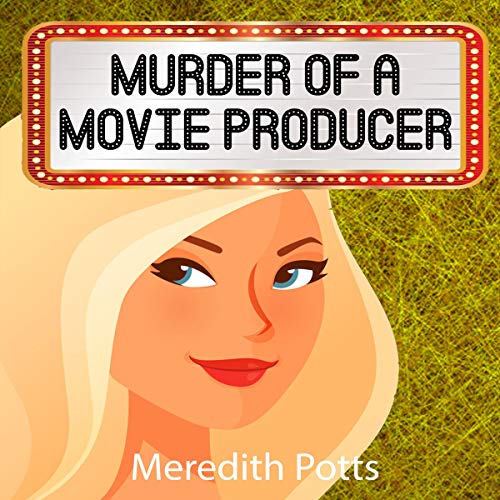 By: Meredith Potts
Narrated by: Stephanie Quinn
Try for $0.00

Hollywood has always been a cutthroat industry, but for Sophie Paulson, the backstabbing turns personal when her movie producer boyfriend, Paul Franklin, dumps her for another woman, then fires her out of the blue. Former actress turned amateur sleuth Hope Hadley arrives in town just as Paul is found murdered and the police suspect Sophie of the crime. Hope desperately races to discover the truth before her friend Sophie is put in jail for the rest of her life.

Titles in The Hope Hadley series:

All of the Hope Hadley books can be listened to in any order.

What listeners say about Murder of a Movie Producer

Sometimes the heart gets in the way.

I enjoyed this story and the series. It has been interesting following Hope as she becomes more experienced. This time, a friend was the suspect, making it harder for her to think through things logically. When it came time to solve, Hope made the right call. Stephanie Quinn did another wonderful job of bringing the story to life.

I received a copy of this audiobook as a gift, and this is my unsolicited review.

Murder of a Movie Producer is a good short cozy mystery. The storyline kept me engaged and the characters are interesting. The narrator gives a nice performance.

As per all her other books in this series, this was a good murder story with an unusual ending. It made you think about how lofe is not always the way it should be. The narration was good.

A visit to Hollywood.

While visiting a friend in Hollywood, a murder happens. Hope will get to the answer

Another great storyline in the series!!!

This story is all about a friendship and the lengths we go to for them. Meredith Potts did a great job once again with her characters and the narrator is again a wonderful voice Stephanie to listen to well doing other things. Loved it and you will too!

I love a great mystery and thus one is just that. Great listening to and all around pleasure. easy to understand. Recommend highly

I was given an Audible copy of this book and am voluntarily writing a review.

This is my first experience with this author and with cozy mysteries. I am typically not a mystery reader, but I really liked listening to this book. The narrator did a great job in bringing the story to life. The story was engaging and kept me entertained throughout. I was surprised by the ending - didn't turn out at all like I thought. Kept me guessing all the way to the end. It was a short and entertaining story and I will be checking out the other books in the series soon!

It strikes me that there doesn't seem to be a explanation for the stars that are given. So I thought I'd start giving my take on it.
1 horrible no redeeming qualities.
2 there are redeeming qualities.
3 good worth reading, or well written but not my cup of tea.
4 great but there's something off.
5 loved it.

This was my least favorite of this series so far. But it is still worth reading.
The narrator brings the story to life.
Reasons I enjoyed this audio book:
Great world building, Unpredictable, Easy-to-read.
Bookshelves/tags:
clean, contemporary, mystery, recorded, series.
This Audiobook was given to me for free at my request from the publisher, author or narrator and I provided this unbiased voluntary review.

This is the second Hope Hadley short cozy mystery that I have listened to in the series and am finding the stories to be well written and enjoyable. The narrator is excellent and portrays Hope very well. The plot was well thought out and kept me guessing until the end. If you like short cozy mysteries, this is one of the best, and I will definitely read or listen to the rest of the series.

Hollywood Murder is a Fun cozy Mystery. I can not wait to continue to dig into this fun series. The Narration was amazing as well and did a great job with all of the characters. So go ahead and dive into this series. Can you solve the mystery?

At the time of this review, Audible did not have chapter titles for this title.

This title was provided free for review, however, this review is my honest thoughts and opinions.