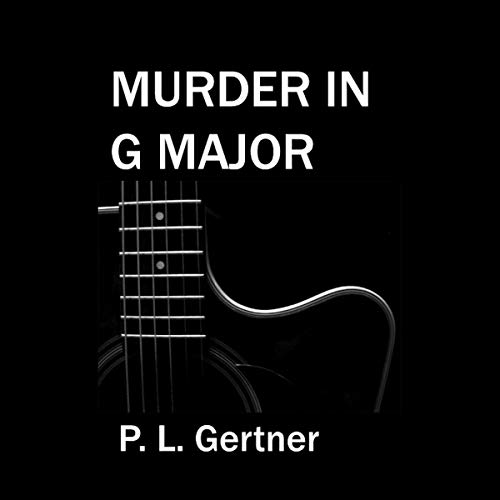 Gessie Chapel has left a bad relationship and her career as a software engineer in California behind to pursue her love of music. As a budding singer/songwriter, Gessie is now busking in Nashville. When she meets an up-and-coming country star named Cole Trammel, Gessie finds herself drawn to the man and makes it her mission to prove he is innocent in the murder of his friend. Will Gessie find the murderer and a relationship with the charming country singer, or will the handsome Nashville detective, Dax Warner, have something to say about that?

What listeners say about Murder in G Major

This was a great read. Gessie is a protagonist you can cheer and fall in love with. She’s strong and independent but sweet and kind, and when murder strikes, she can’t help but put her nose where it doesn’t belong to help out her friends. A little romance, a little mystery, and a whole lot of fun was the perfect recipe for a book I couldn’t put down. "I was given this free review copy audiobook at my request and have voluntarily left this review."

Interesting plot, music, and murder, well done and the narration was great. Gussie befriends Cole an up and coming new Star, when he is accused of murder. Enjoyable given audio for my voluntary review.

I loved the storyline and setting of this book. The narration was great....including singing! It’s a good murder/mystery that will keep you guessing with a little romance on the side. I definitely recommend! I received a review copy at my request and voluntarily reviewed.

I was given this free review copy audiobook at my request and have voluntarily left this review. Just awesome!! If you love murder mysteries and music this is the book for you. The story and the performance are just so real! I really can’t say enough praise for this book other then you have to listen. It’s that good!

Murder in G Major is an entertaining and well developed mystery with engaging characters. The story is well developed with twists and turns. However, I feel that the inclusion of long desriptive passages of street performers makes the pace of the story slow. I found myself skipping ahead a few times so I could get back to the acutal story. Alandra Ralph is an ok narrator, but she doesn't do a Tennassee Twang. The author made a noticeable effort to infuse Nashville culture into the story. The Tennassee Twang would have been a more affective way to bring the culture of Nashville alive in the story than all of the street performers. Other than that I did enjoy the story and look forward to other books by this authour. I receoved this book for free in exchange for an unbiased review.

I love a good mystery and this book was definitely that. The fact that it combined the Nashville music scene, busking, drugs, car dealers, and spousal abuse was just a wonderful mix that just worked. Gessie escaped her abusive boyfriend and ended up in Tennessee as a busker. Along the way, she meets some wonderful characters and stumbles across a murder. There were some wonderful elements to this story, including the actual singing of a song, that makes it worth your time. I do have a problem with one aspect of this listen. I can't tell if the issue was with the written word or the narrator but there were several times when I wasn't sure if I was hearing what was being spoken by Gessie or if it was just story progression. I often found myself surprised when I thought it was one, but it was the other. It was a mild distraction but a distraction nonetheless. Still, I very much liked this listen and its wonderful mix of story elements.

A well-written story of tenacious people trying to help others find innocence, love, and a sense of fulfillment. Alexandra Ralph did a great job narrating and bringing the characters to life. I was given this free review copy audiobook at my request and have voluntarily left this review.