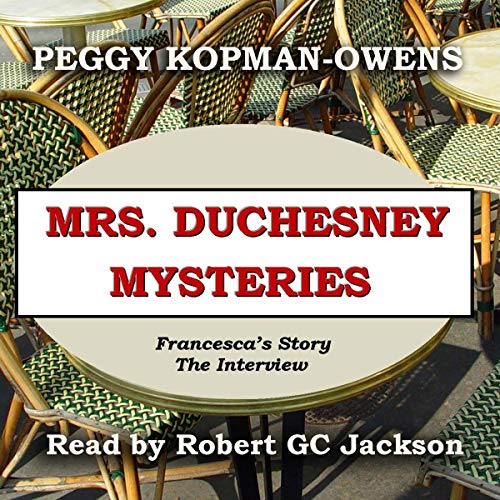 By: Peggy Kopman-Owens
Narrated by: Robert G.C. Jackson
Try for $0.00

People often ask me, "How did Mrs. Duchesney become a famous Paris detective?" I tell them it should have been easy to predict that Francine Robinsworth Duchesney would find success doing something unexpected of a young woman from a small town in the American Midwest. For you see, she had never been what others in that part of the world might call "normal." When I came to Paris in search of Mrs. Duchesney, a person described to me as the legendary Paris Sleuth Extraordinaire, I did not imagine her to be the unassuming little woman seated alone on a bench in Parc Montsouris.

There was nothing extraordinary about this vaguely fashionable bundle of clothes, whose face was hidden beneath a hat and eyeglasses. Born with an exceptional curiosity, in a small town jam-packed with well-preserved century-old mysteries, where indiscretions lined cellars and attics like jars of last year's apricots, Francine found no lie was so well constructed, no secret so well kept, no treasure so deeply buried that she could not discover it. My interviews with Mrs. Duchesney would be the focus of my first year in Paris. After that, I was completely seduced by the woman and the city, forgetting the reason I had come there and finding new reasons to stay.

I am a professional book reviewer who is not easily impressed, but I loved *Francesca's Story*. The story is told mostly in flashbacks. The female protagonist undergoes so many setbacks during the first two-thirds of the story that she would be pitiable, were it not for the fact that she is strong and able to assess her situations in fairly detached ways. By this device, the story sustains its humor and entertainment.

I hadn’t read any of the Duchesney Mysteries prior to this novel, but I have to say I enjoyed it.

Franco e, who’d grown up in a small, Midwest town, wanted something bigger from life. After an awful town scandal that some say took her grandmother’s life, Francine set out, to the other side of the world. There she met a man who helped set her feet upon the path to Super Sleuth Extraordinaire.

Mrs Duchesney Mystery- The Interview, Francesca’s Stoey: The Interview is witty, humorous and I’m sure provided background to a lovable character. I don’t know exactly, but I gather that feeling.

If you enjoy the Duchesney series, then you’ll love getting to know your fav, female detective. I’m off to my next read.
Cheers!