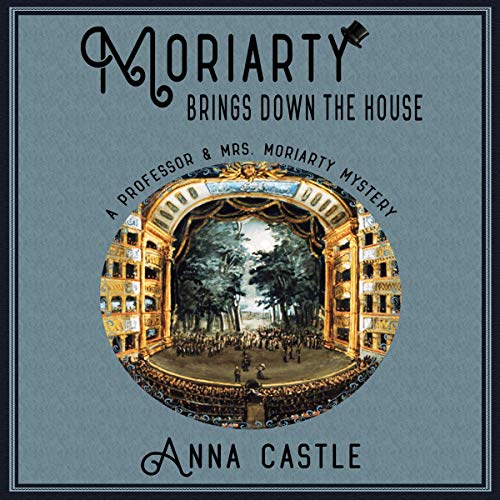 Moriarty Brings Down the House

“Either my theater is haunted, or someone’s trying to drive me into bankruptcy!”

Professor Moriarty’s new client is the manager of a West End theater. He’s three weeks away from opening his Christmas pantomime, the expensive spectacle that pays for the rest of the year. But after months of freak accidents and spooky incidents, the cast and crew are convinced the show is cursed. Worse, he’s out of money, and the rent is due.

The Moriartys leap to the rescue. Angelina takes on the leading role, and James supplies the needed funds. While she works backstage, uncovering secrets and grudges, he follows the money in search of a motive.

Then, someone sets Sherlock Holmes on their trail, trying to catch them crossing the line into crime.

How far will Moriarty have to go to keep the show afloat? And will they all make it to opening night in one piece?

What listeners say about Moriarty Brings Down the House

Such a thrilling book. I have only seen behind a stage in a theatre a handful of times from performances when I was young. But getting to hear about some of the inner workings in this book was great! So many hiding spots, so many bustling people, and no one pays that close attention to the inside man who happens to be lurking everywhere.
I love hearing about Lena Lovingtons fans and how amazing an actress she was.
If you are an artist at heart this is a book for you. The mystery and details put into the story make it a very thrilling tale.

I enjoyed seeing Moriarity's personality brighten. A well-developed tale set in a theatre. We get to learn backstage secrets and antics.

Jill Smith did a great job bringing the characters to life.