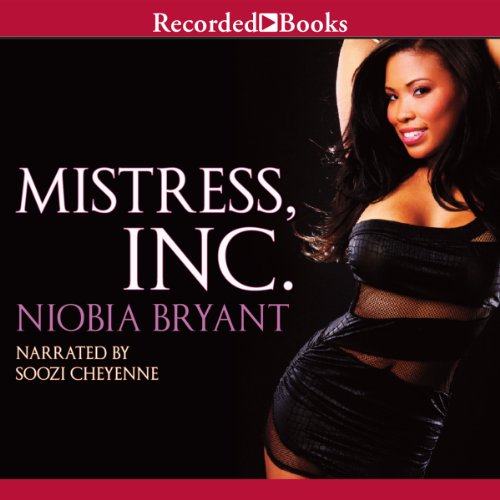 By: Niobia Bryant
Narrated by: Soozi Cheyenne
Try for $0.00

From the author of Mistress No More comes a sexy, exciting novel that’s sure to thrill fans everywhere. Niobia Bryant’s Mistress, Inc. follows Jessa Bell, an ex-mistress who decides to turn over a new leaf when an affair with her best friend’s husband ends in his death and Jessa lying in a hospital bed. After landing a book deal and time on national talk shows, Jessa appears to be a changed woman. But leaving the past behind is harder than she thought, and when her darkest secrets are exposed, events take a decidedly nasty turn.

What listeners say about Mistress, Inc

The brief description of the story (given on this site) tells you what the story is about, but it's the narrator who makes the story comes to life. The are three novels in this series and I suggest that the stories are read in order because it makes for a better read and keeps you on the edge of your seat. Highly recommend! for a little drama that you can sit back and observe and have a few laughs too.

Well, well, well, I have read the third installment of this Mistress series, and we have come to hear the voice of the mistress, Mz. Jessa Bell, and she seem to have a hell of a lot to say.

In this installment Jessa speaks out, and peoples are listening to what this pregnant mistress has to say. She goes from tramp of the year, to an leading authority on cheating, no good husband's.... If that ain't the "fuck-it," I don't know what is.

This novel takes a few twists and turns, although there was nothing really shocking, but not that predictable either, which kept me racing towards the end. Mrs. Jessa Bell took center stage, and the author worked her in every which way possible. Although Jessa tries hard to stay on the side of The Lord, there just too damn much going on with the woman to walk among the righteous, and one reason why is, if Jessa looks anything like the model on the audio cover here, then hell she was created to please and to be please. Why fight nature? --And Jessa Bell can not fight hers.

My versions of this novel was read in my Kindle app and listen as an audiobook purchased from Audible.com. It was narrated by (the hot, sex, seductive voice of), Scoozi Cheyenne, and yes I got a thang for this woman's voice. The audio version played for 9 hours and 2 minutes, and Published by: Recorded Books.

Author Niobia character development skills was excellent. The plot was driven by Jessa's small bush fires she had flaming up everywhere, which will keep you turning the pages to see what she does or how she responded to situation, the woman has such a wicket tongue. --I think the author was trying to prove a point to counter the judgement handed over to Jessa, and I'm not sure if I liked it. This dislike is not against the author or the storyline, it's just to say in my opinion to uncover all those who were judged as hypocrites damn near validated Jessa betrayal, and exonerated her of her sins, I just like calling a spade a spade. You read it and let me know what you think. The drama is good, not over the top. The situations are true to life, as well as their solutions are believable.

This story just seem to get better as it goes along, if you haven't gotten your copy yet run and your copies today,, because the next book is on its way! "The Pleasure Trap" set to drop this October 2014..... So catch up.... This novel gets a 5 out do 5 stars.

What did you love best about Mistress, Inc?

The thing I enjoyed best about Mistrss Inc was the fact that I did not know what to expect next.

What was one of the most memorable moments of Mistress, Inc?

I was glad that Jessa and her mom were reunited.

Soozi Cheyenne did an awesome job

This book was truly a good listen, this book had many twists, turns and suprises and I am pleased with the way it ended.

Who condones being a mistress??

This book was okay I guess. One would think the author is/was mistress lol. . i mean in an affair both is to blame regardless. This book is just unreal and the author should've kept it. Mistress's rarely have an happy ending due to KARMA whether it comes instantly or a decade later a mistress never win but again this was an okay read.

THIS BOOK IS RIDICULOUS!!! ARE YOU SERIOUS??!! ALL SHE DID TO HURT THE WOMEN IN THE PREVIOUS BOOK AND THEN SHE GET TO LIVE HAPPILY EVER AFTER? I TRULY BELIEVE IN GOD'S FORGIVNESS BUT YOU HAD THIS WOMAN CONTINUE TO HURT PEOPLE INCLUDING THE TWISTED HUMILIATION WHEN THE MOM SLAPPED JAIME. COME ON NOBIA THIS WAS SO ABSOLUTELY RIDICULOUS. I DIDNT WANT TO FINISH THE BOOK BUT DID IN HOPES THAT SHE WOULD LEARN HER LESSON. YET SHE CAME OUT SMELLING LIKE ROSES. TERRIBLE END TO THE SERIES!!! HATED IT

It’s a sad story of a horrible situation and betrayal and this Jessa a breathing destruction, she is being treated like a victim, celebrity and it’s deeply offensive how a mistress is being glorified. Very disappointed

Fun read. Vocals are engaging and steady! Good Funny and relatable as all the books on the series

If you could sum up Mistress, Inc in three words, what would they be?

What was one of the most memorable moments of Mistress, Inc?

Have you listened to any of Soozi Cheyenne’s other performances before? How does this one compare?

I really enjoy listening to Soozie narrate books. This book was no different than the others--she did a wonderful job.

Mistress INC.: Moving on Up!

This installment in this series didn't disappoint. It was a wonderful read. I can only hope that there is another book to follow, I would love to see where Jessa's, Jamie, Aria, and Renee's life will lead beyond Richmond Hills.