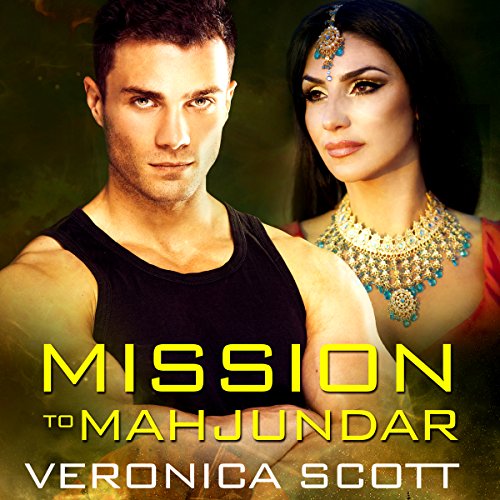 By: Veronica Scott
Narrated by: Michael Riffle
Try for $0.00

An attempted assassination left Princess Shalira blind as a child and, now that she's of marriageable age, her prospects are not good because of her disability. She's resigned herself to an arranged marriage rather than face life under the thumb of her cold stepmother. But then she meets Mike Varone, a Sectors Special Forces officer sent to Mahjundar by the intergalactic government to retrieve a ship lost in her planet's mountains. After Mike saves Shalira from another assassination attempt, she arranges for him to escort her across the planet to her future husband. She's already falling hard for the deadly offworlder and knows she should deny herself the temptation he represents, but taking Mike along to protect her is the only way she'll live long enough to escape her ruthless stepmother.

Mike, for his part, resists his growing attraction to the princess; he has a mission on this planet and rescuing the vulnerable but brave princess isn't it. No matter how much he wishes it could be. But what should have been an easy trek through Mahjundar's peaceful lands swiftly turns into an ambush with danger around every turn. Shalira's marriage begins to seem less like an arranged union and more like yet another planned assassination. The more they work together to survive, the harder it becomes to stop themselves from falling in love. Caught in a race against time, can they escape the hostile forces hunting them and make it off the planet? Can there be a future for a simple soldier and an intergalactic princess?

What listeners say about Mission to Mahjundar

I'm not sure why this is classified as Science Fiction as there is minimal SF content. It could very easily be set here on Earth, in fact I often forgot it was supposed to be set on another planet. Apart from that it was a very enjoyable, well-written standard story - hero escorts heroine on journey, they fall in love, get into and out of danger, HEA.The End. Both main characters were better than the usual - she has been blind since a childhood accident and has learned to deal with adversity. The hero is much more likeable than usual - not so much of the 'Me big Alpha-hero, you little woman', he actually listens to her!

The narrator is excellent, he has a good pace, with a range of clearly defined voices and was a pleasure to listen to. All in all, a very pleasant listen and I would enjoy more by this author.

The narration is excellent it takes me through space and time very intriguing story! Female narration would be good for the female parts though.

This was a fabulous sci-fi romance story filled with love, adventure, and suspense. Just when I believed the hero and heroine were about to get out of a bad situation, something else happened to put their lives in jeopardy. I never knew what would happen next. I really liked how even though the heroine had a disability, she wasn't helpless and even helped to save trained military men in certain situations. The narrator did a wonderful job telling this story, and I plan to read and listen to more from the author and narrator.

What did you love best about Mission to Mahjundar?

It is a fast paced that will keep you guessing, This is my kind of book Just when you think you know what is going on another twist is presented.

What a Wonderful World

Veronica Scott is gifted with creating worlds that pull you in and surround you with their vibrant energy. This book was a feast to my imagination. I was there through the emotional ups and downs as well as the action that never seemed to stop. I thoroughly enjoyed the interaction between the strong-willed and courageous Princes Shalira and alpha military hero, Mike Varone. Since both Veronica Scott and Michael Riffle were new to me as an author and narrator I wasn't sure what to expect, but the cover caught my attention and the summary intrigued me. I'm so happy I took the chance because it won me hours of entertainment and it won the author and narrator a new fan.