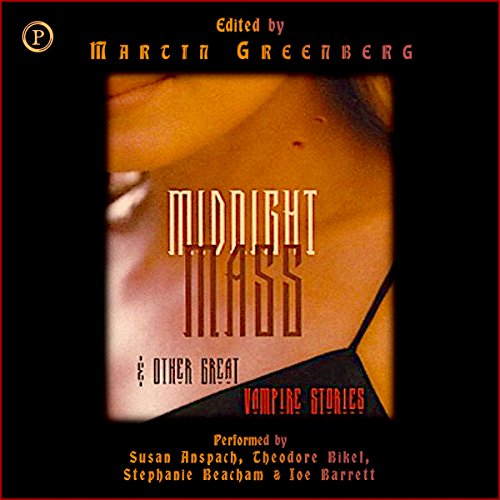 Are vampires a bloodthirsty menace to mankind? Or simply misunderstood creatures struggling to survive? After hearing these seven stories, you'll be able to decide for yourself. From the horrifying to the humorous, some of today's finest authors share stories about one of mankind's oldest imagined evils, the vampire. From F. Paul Wilson's title story to Esther Friesner's comic tale of rival teens trying to best one another, these stories bring vampires to (un)life, in all their majesty and terror. Stories included: "Bite-Me-Not or Fleur de Fur" by Tanith Lee, "Food Chain" by Nina Kiriki Hoffman, "Moonlight in Vermont" by Esther Friesner, ""Madaleine" by Barbara Hambly, "Victims" by Kristine Kathryn Rusch, "Seat Partner" by Chelsea Quinn Yarbo, and "Midnight Mass" by F. Paul Wilson.

What listeners say about Midnight Mass

The only story worth listening to in that collection was "The Midnight Mass". All the rest seem to be rehashed genre pieces that I'd either heard before or they just completely lacked feeling. The readers were also a little lackluster, either trying to hard or not enough. I can't recommend this title.