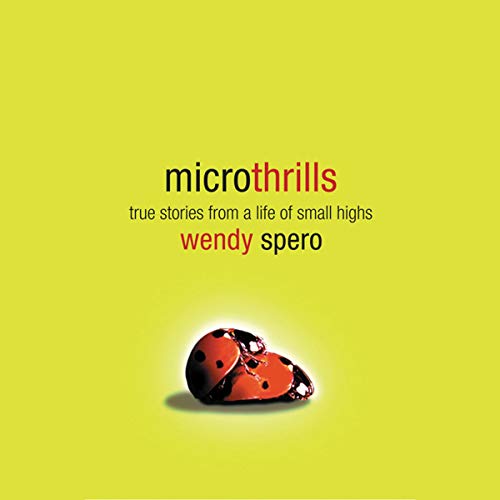 Raised in Manhattan by her overly protective sex-therapist mother who wore "seven layers of shoulder pads" and her two doting grandparents, life in Wendy Spero's world has never been dull. As a child, she passed the time organizing impromptu "garage sales" on city sidewalks, sniffing fruit-scented magic markers to intoxication, parenting dozens of high-maintenance stuffed animals, and seeking out other "microthrills", which she writes about in this hilarious audiobook of odd but true stories.

Life got increasingly more interesting for Wendy as she grew up and embarked on a stint of door-to-door knife-selling before taking an office day job, where she developed an abnormally close, paternal relationship with her big-time executive boss, which involved as much pot smoking as it did mentoring. (Wendy, in turn, sprinkled glitter in his expense reports and placed gold stars on his paychecks.)

Now, as a budding young comedian living in LA, Wendy grapples with such "grown-up" issues as trying to kick her addiction of eating candy in bed and finally learning how to drive.

What listeners say about Microthrills

funniest book i've ever heard. Wendy's narration makes it all the better---probably one of the few books that is even more enjoyable listening than reading.

Wendy's micro-examination of her life's not-so-momentous moments is a unique experience. The going got kind of intense for me at times, so don't expect the 6 hours to just fly by in a sitting or two. I'm in full agreement that the audio version would be a completely different experience (better!) than for those who read the print book. Worth it alone to hear the voice she uses for her mother. <g>

Wendy Spero's first book, of which I hope many more will follow, is a genuine gem. With a well honed narrative, she has unfailingly captured the humor of her obessesions, the strangeness of her family and friends, and the absurdity of her school and work life. As her life unfolds in a series of chronological stories, I smiled, laughed, and cried as she touched my soul with both her humanity and humor. By the end of the book, I wanted to thank Wendy Spero for having shared so much of her unusual experiences and keen insights.

a favorite I can listen to over and over again. i highly recommend giving it a listen

I bought this book a while ago but never listened to it and couldn't remember anything about it. When I started listening, I was at first mildly amused by the author's essays describing of her life and family. As the book went on, I got a very good idea of her and her many, many frankly admitted foibles. Wendy seems to realize her own quasi-craziness and doesn't mind sharing it with us for laughs, but she also has a deep and abiding love for her family and her boyfriend Amos (who seems long-suffering and worthy of her devotion). Some of the essays at the end of the book were so funny that I embarassed myself by laughing out loud in a restaurant where I was dining alone and, later, in a public bathroom stall (I'm not sure if anyone else was in the bathroom). I'm a fan of David Sedaris, and Wendy will also be on my list of essayists to enjoy.

Yes defiantly, totally, it’s like I’m totally listening to my little sister conversation with how care she is taking to, and yes 6 hours of it you heard me right 6 hours not 4 not 5 but yes 6 hours and on and on. God help poor Wendy. I wish I can get my credit back for this one it is by far the worst ever. As in I’m going like so crazy with this live of what is her name? Wendy is it like in Hamburger ye that’s it Wendy like in Hamburger

That is what she stalk like in this book all of it you can’t really tell at what point this teen is a teen or a grown up.