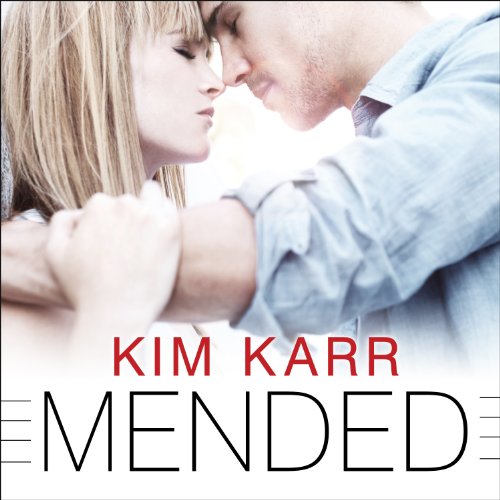 By: Kim Karr
Narrated by: Veronica Meunch,Christian Fox
Try for $0.00

Always in control, Xander Wilde considered life on the road to be a perfect fit for him. But when disaster strikes on the band's latest tour, fate intervenes, and a newly single Ivy Taylor, the only girl he has ever loved, steps back into his life.

After moving past her painful breakup with Xander years ago, Ivy was poised to become the next big name in music, when suddenly she withdrew from the limelight - the same day she announced her engagement to her controlling agent, Damon Wolf. Xander knows he should keep his distance. But once they're on the road, he can't resist pursuing her for a second chance. Yet a jealous Damon can't let her go - and he's keeping dangerous secrets that could destroy them all.

What listeners say about Mended

The writing is so cliche and eye rolling! Ugh!! The male narrator was good, but the female sounded like someone plugged her nose. It was super annoying. DNF about half way through.

I actually liked this book more than the first two in this series. I loved Zander and Ivy and the rest of the characters in this series. the narrators are good. looking forward to the next book.

The narrators their work so good together love love them , it's like I'm feeling their love for one another love them 💜

not as good as first two in series

not sure why this story drove me crazy, but i found myself skipping parts of it, more and more as the story progressed. i am still glad i listened to it regardless as i adore the characters in this series, i think the story coulg have been told in five hours instead of eight. cutting some would have tightened it up. Both narrators are ok, but the way they are used does not work. The male voices from the female are much better than the female voices from the male. The moving back and forth between narrators does not enhance the experience. maybe if the female read all female diologue and the male read all male diologue, it would provide a much needed balance. glad zander got his story...

3.5 STARS GOOD YES BUT THE 'SIZZLE' WAS MISSING

I thought my trouble with this book was that I had just come down from a high after finishing an amazing trilogy (Driven) and in comparison this felt a little flat but I can now see that I am not alone in feeling that there was just something missing from this 3rd book.

There were good bits and bad bits, there was romance but I really didn't feel it from Ivy however Xander was sexy, handsome, loving and thoughtful. I had no problem with the plot which had a few surprises but the constant avoiding each other got boring and I just didn't feel the chemistry between Xander and Ivy or any sexual sizzle when they eventually 'hooked up'. The sex scenes were forgettable and a bit blah and River and Dahlia's sub plot was really sad.

Christian Fox's narration was good but Veronica Meunch sounded bunged up like she had a cold.

Worth a credit? If you are like me and are following this series then it's a must so despite everything, it keeps you up-to-date with what's going on and is an ok listen so yes creditworthy.

The narrators were good!

Other than the narrators, there wasnt much to this book. Pretty predictable and uneventful. Just dragged on and on.