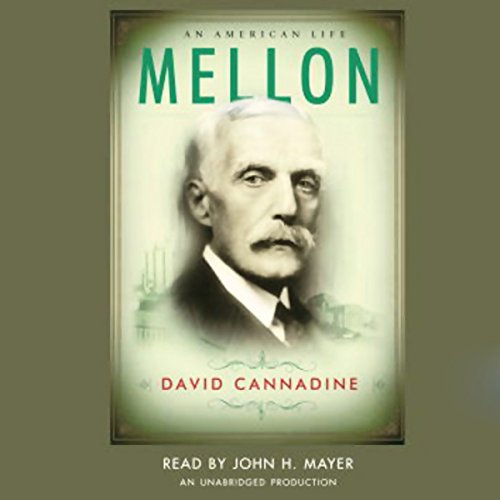 By: David Cannadine
Narrated by: John H. Mayer
Try for $0.00

A landmark work from one of the preeminent historians of our time: the first published biography of Andrew W. Mellon, the American colossus who bestrode the worlds of industry, government, and philanthropy, leaving his transformative stamp on each.

Following a boyhood in 19th-century Pittsburgh, during which he learned from his Scotch-Irish immigrant father the lessons of self-sufficiency and wealth accumulation, Andrew Mellon overcame painful shyness to become one of America's greatest financiers. Across an unusually diverse range of enterprises, from banking to oil to aluminum manufacture, he built a legendary personal fortune, tracking America's course to global economic supremacy. The Mellon way was to hold companies closely, including such iconic enterprises as Alcoa and Gulf Oil.

Personal happiness eluded Mellon, however: his loveless marriage at 45 to a British girl less than half his age ended in a scandalous divorce, and for all his best efforts, he would remain a stranger to his children. He had been bred to do one thing, and that he did with brilliant and innovative entrepreneurship. Collecting art, a pursuit inspired by his close friend Henry Clay Frick, would become his only nonprofessional gratification. And by the end of his life, Mellon's "pictures" would constitute one of the world's foremost private collections.

The issues Andrew W. Mellon confronted, concerning government, business, influence, the individual and the public good, remain at the center of our national discourse to this day. Indeed, the positions he steadfastly held reemerged relatively intact with the Reagan revolution, having lain dormant since the New Deal. David Cannadine's magisterial biography brings to life a towering, controversial figure, casting new light on our history and the evolution of our public values.

"Lavish....Insightful....Grand successes and epic failures, engrossingly recounted....Emphasizes the man rather than the money." (Kirkus)

What listeners say about Mellon

I must admit that before listening to this book I knew very little about Andrew Mellon. With the exception of Mellon Bank, Carnegie Mellon University and his service as US Secretary of the Treasury under 3 presidents, Andrew Mellon to me was a distant figure who ranked with the other plutocrats of the guilded age (Morgan, Frick, Rockefeller and Carnegie). This book was truly a revelation. It is a long listen but the narrator does an excellent job and the coverage of Mellon's life and ancestory is truly complete. I must admit that I found the latter part of the book (during which the author discusses Mellon's time in Washington while he served as Treasury Secretary (and for what it is worth, he not Ronald Reagan was the creater of Trickle Down Economics), his income tax trial, his fight with New Dealers and his work as founder of the National Gallery) to more interesting than the first part of the book where the author discusses his business career. Nevertheless I found this book to be extremely enlightening and worth listening to despite its being very long in length.

A very detailed history of the Mellon family (lots of time spent on the father), but more importantly, this is a description of the rise of American-style capitalism. David Cannadine is a historian with obviously great research skills. This audio book tops 36 hours and I found every minute of it to be interesting. I'm so sick of journalist writing shallow books on topics they only have a passing interest in (and zero research ability beyond talking to someone who just so happens to want to sell something). Prof. Cannadine says the book was more than ten years in the making--I just wish we had more quality business history like this.

Wonderful biography of a forgotten titan

The author does a wonderful job with the life of Thomas and Andrew Mellon presenting the essence of what it took to build the family fortune. He presents a good analysis of the sacrifices necessary and emotional/personality holes in A.W.'s psyche and some of their consequences on him and his family. Of the biographies of the great industrialists I've read, this one is the most interesting due to the varied life A.W. led and the story that was told of a nearly completely forgotten titan.

Mellon Biography is one of the best

The biography of Andrew Mellon is one of the best written biographies that I have ever read. The story of the man laced with the history of his incredible 82 years is literally a page turner. The reader is one of the best.

The book is extremely thorough. The author is quite skillful in his writing, but the book is almost too long. Also the narrator reads horribly slow. Set it to 1.25x speed and its perfect.

A beneficiary of the American Capitalist system who honorably used it to his advantage then created a lasting legacy. Gives one a new understanding of Washington DC.

What does John H. Mayer bring to the story that you wouldn’t experience if you just read the book?

A great reader. Good inflection, soothing voice; one of your best

An extraordinarily and unexpectedly interesting biography of an important but little known or understood man.

The author did an excellant job on protraying Andrew Mellon, although it is very dificult to write a biography on a person and really catch the human nature of the person, since humans are very complex, but this book did an excellant job of bringing forward Andrew Mellon as living complex person. I really enjoy the beginning with Mellon's Ancestory, it help me to understand the movement and events that shape the lives of people in Pittsburgh Pa., in the 1800's. It is also of interest the latter part of the book to understand how his philosophies continue down to our day. I would highly recommend this book.

Mellon is a good biography about a life of a known man whose life until now remained obscure. Somehow the story falls short of other biographies of melons contemporaries such as Rockefeller. Perhaps this is just due to the nature of its subject but it's still disappointing to not know more about the feelings and thoughts of a player so closely linked to the Great Depression and old fashioned anti-Union capitalism. However it's still
A worthwhile read and a glimpse into an area that disappeared along with Mellon himself.

The narrator is great, John H. Mayer is a great voice for history. The writer is a silly nut.

The book is worthy of both the historical and finance reader. Thomas Mellon and his son Andrew Mellon are major contributors to the greatness of America in the early 1900's and to the great bounty we have today. Without, their stewardship of savings and many fledgling businesses, America would be less of a nation today. Add A. Carnegie, H. Ford, and JD Rockefeller to this list.

The author is historically un-informed as he uses the discredited work of Ida Tarbell and Lincoln Steffens to smear Mellon. The very foolish Lincoln Steffens actually praised the USSR as the future. Steffens was a committed Communist, but Cannadine uses him as an analyst of 1900's Pittsburgh. Today, how many people would want to live in Pittsburgh versus Stalin's Moscow. Even the Russians have a big community in Pittsburgh. Meanwhile, no Americans packed their bags to move to the USSR or even Putin's Russia today.

The author does not understand capital allocation or the creativity of business. If predicting future demand and running a business intelligently were common, anyone could open a market account and make big dollars, day-one...without education. The author thinks savings, investing, and running a business is not creative! Obviously, he does not know how the world actually works, he clearly shows his college professor mentality. His subject is a Leonardo da Vinci of American business and he calls him "philistine".

By the way, the Philistines were very smart people and we owe them for the much of the advancements we consider Greek, Roman, or Islamic today. These guys created the integrated civilizations and trading networks, of the Mediterranean we admire today.