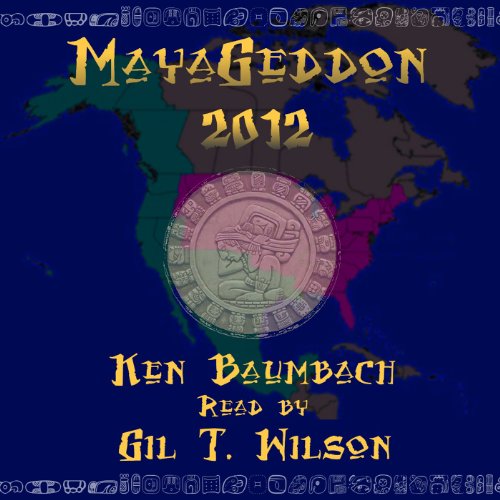 By: Ken Baumbach
Narrated by: Gil T. Wilson
Free with a 30-day trial

Mayageddon 2012 is a comedy with a liberal splash of political satire and a dash of spy thriller and science fiction. (Imagine Tom Clancy and Dan Brown meeting Carl Hiaasen and Harlan Ellison in a bar for drinks and to start brainstorming novel ideas).

On December 21, 2012, the mysteriously abrupt ending date of the Mayan calendar, the earth is rocked by global seismic events as the earth and the sun line up with the center of the galaxy, an event that happens only once every 26,000 years.

Dolly Roderick, ruler of the Roderickstan, the remnants of the ravaged USA, and Mary Ellen Martin, heir to the M-Mart fortune, are in a dangerously escalating struggle to become the most powerful woman in the torn post-Mayageddon world. CYA agent Ryan Jackson - The Committee of Yenta Agents- (formerly the NSA) - uncovers the deadliest terrorist plot ever conceived and is convinced it is linked to Dolly and Mary Ellen's battle for power. He must stop the plot before it wipes out the North American Eastern seaboard and kills tens of millions of people.

What listeners say about Mayageddon 2012