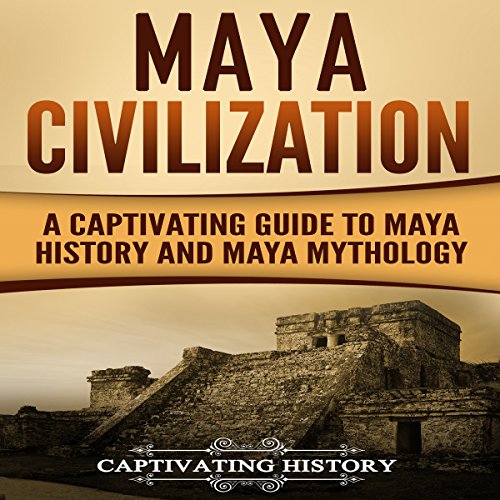 By: Captivating History
Narrated by: Duke Holm
Try for $0.00

In this captivating guide, you will discover why Maya have gained such worldwide admiration over the many other civilizations that existed in Mesoamerica at the time. You will learn how the Maya civilization developed, the major turning points in their 3,000-year-long history, the mysteries surrounding their demise, and some of the unique places where Maya exist to this day.

In the first part of this audiobook, you will discover the origins of the Maya civilization and the Mesoamerican cultures that may have influenced them. You will find out why Maya (out of all the different tribes that existed in the region at the time) have captured the imagination of the West so much. The audiobook will reveal how they lived, ate, slept, whom they worshipped, and how they used herbal medicines and hallucinogenic plants to treat the sick.

You learn about their trading routes and rivalries with another famous Mesoamerican tribe - the Aztecs. The audiobook will go into the decline of the Maya civilization and how their rivalries with the Aztecs aided the victory of the Spanish conquistadors in the 16th century, led by the famous Spaniard Hernán Cortés. You will also learn about the heroic efforts of the Maya to fend off the Spaniards, and why they were able to succeed at this task for much longer than the Aztecs.

The audiobook will also track down the Maya living today, a population that is still six-million strong and adhere to many of the traditions that their ancestors once held. The audiobook will also cover battle tales and gore of human sacrifice. All this and much more will be discussed so listen to this captivating audiobook now to learn more about the Maya Civilization.

What listeners say about Maya Civilization: A Captivating Guide to Maya History and Maya Mythology

Remember back in 2012 when some were predicting the end of the world because of an ancient calendar that covered thousands of years but ended in 2012? That was a calendar of the Maya. We know of the Inca that built a complex civilization centered in modern day Peru and know especially of the ruins of Machu Picchu. We know of the Aztecs whose major city was the foundation for modern day Mexico City, but in reality, the Maya Civilization was even more amazing. They had an incredibly accurate calendar and built massive cities. They are the builders of the famous pyramids in Central America. They had a complex writing system and practiced sustainable agriculture built around maize, beans, squash, and chilis, and these are their culinary contributions to the rest of the world. They learned that these four plants grew better together, with maize (corn) providing the support for beans to grow up, squash covering the ground between rows, and chilis warding off pests.

Their civilization began possibly as early as 8,000 B.C. but they began to develop major settlements around 2,000 B.C. and by 1,000 B.C. had built major cities. Unlike the Inca and Aztec, their civilization was not built around a central city or even a central ruler, but was a collection of city states which is one reason they were much harder for the Spaniards to conquer, since it didn’t require just overthrowing a single city or single ruler to cause the civilization to collapse. It required defeating city states one-by-one, which didn’t happen until 1697. They kept extensive records of their history and cultic practice, most of which, unfortunately, were destroyed by the Spanish. They were warlike and practiced human sacrifice extensively.

They knew a lot about astronomy and advanced mathematics. They even had a concept of zero which shows up in 1,000 B.C., which may make them the earliest civilization to use it. Zero seems so obvious to us, but actually didn’t evolve in Europe until long after the fall of the Roman Empire. Interestingly, their numbering system was base 20 instead of base 10 (I guess they used their toes), but even more large numbers were written in multiples. In other words, after 20, they didn’t just add another symbol, they stacked the symbols but the higher ones were multiples, similar to a logarithmic scale. For example, the symbol on the bottom is for the “ones” (1-20), the symbol above that be a multiple of twenty (i.e. the symbol for “2” stacked above the first symbol would represent 2x20, or 40). The symbol on level three would be a multiple of 400. They were able to use huge numbers and could write them much more compactly. That is mind blowing to me. You have to use multiplication just to read numbers larger than 20.

Note that the Maya have not disappeared. They are still a significant portion of the population of southern Mexico as well as several other countries south of Mexico. They still practice much of their cultural traditions (other than human sacrifice), though their written language was lost until gradually deciphered in the last century.

The problem with this book is that it was just a very basic short overview. It was just enough to pique your curiosity and to give you a deeper respect for ancient cultures. This won’t take you very much time to get through and it is certainly interesting.

loved it. I gained sweet understanding of the culture and encouraged to seek more . Thank you!

History You need To Know

A fascinating history revealing book, well researched. My thanks to this author for this book and to the dealer at Amazon who made it available to me.

Absolutely fantastic book. The information is very compelling. The writing and narrating is fantastic. This book is highly recommended.

I don't give many 5-star ratings, but I don't see how this book could be any better. The history is fascinating, the writing is always fluent and interesting and the history is very thoroughly researched.

How amazing is to find a book on Mayan history that is great to read and also puts you in the context of the events that happened during the time the ruins were found. I am Guatemalan and I learned so much from the history of my country. I liked the information of the places, it makes you feel you are there. Very well documented!

A brilliantly written page-turner about the discovery of the major Mayan ruins in the first half of the nineteenth century. This author's writing gives the listener a real sense of the challenges faced by these adventurers

Together with Time Among the Mayas, this book The Maya is a must, specially if traveling in Mesoamerica. Gives a concise idea of the development of the cultures in that area. A audiobook explained with excellence and very easy to understand.

Well-expressed, informative and, most importantly, reasonably up-to-date. It gives a thorough overview of the Maya civilization, illustrated with photos, drawings and maps for each period of its development. A 'must-have' for Maya lovers, interesting not only for beginners in this field.

Bought this for my daughter. We are going to Mexico to explore some Mayan Ruins soon. She enjoyed listening to this and learned a lot. She can't wait to learn more during our trip

It was new to me before listening to this book.

This name was new to me and I was not sure about it then i got this book and listen, oh what a fabulous book and what great description provided by the author to me.

Amazing story of the lives, adventures and discoveries of two little known men. Their discoveries alone, if widely known and appreciated, would change American perceptions and appreciation of our neighbors to the south. Every American school child should learn of these two men and what they found.

I really had no idea about Stephens or Catherwood or their expedition into Central America, but Carlsen does a really good job of blending some background information about these two and their travels among the Mayan ruins.

The art skills shown are more than remarkable especially considering that were made in the jungle and often with very poor light and deep shadows. I recommend this book and I hope to see the drawings in a media better than a Kindle audible book.