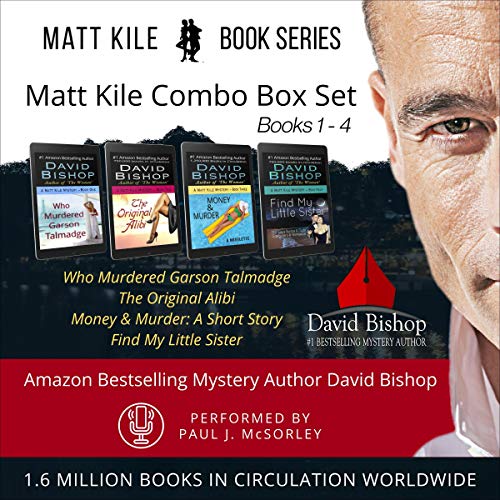 Presenting a combo bundle, books one to four in the Matt Kile Mystery series.

Matt Kile - ex-cop and ex-con, current smart aleck, and a neighbor of Mr. and Mrs. Talmadge - has built himself a comfortable career writing mysteries. Garson Talmadge sold weapons to Saddam Hussein, then moved out of France, came to America, and married Clarice, a woman half his age. When Clarice is arrested for murdering her husband, Matt becomes the investigator for her defense attorney, and quickly learns there is a line of suspects stretching from the US into Europe and the Middle East. Not long after getting involved in the case, Matt learns that Garson Talmadge’s weapons deals meant the FBI had an interest as well as the French Prefecture of Police. While Matt is simply trying to establish that Clarice is innocent, the FBI is trying to learn how Hussein got some of his weaponry and powerful members of the French government and armaments industry wants to keep Matt from following the trail far enough to expose them.

Told in the first person, Matt shares his thoughts and wise remarks as he weaves his way through a mass of plot twists and turns to its conclusion and learns who murdered Garson Talmadge.

Eleven years ago General Whittaker, long-retired former member of the Joint Chiefs of Staff, bought an alibi for his grandson, who had been arrested for the murder of his fiancée, Ileana Corrigan, and the general’s unborn great-grandson. The charges were soon dropped, and the grandson released. General Whittaker is dying, and he can no longer ignore his doubts. The question that has haunted him all these years must be answered. Did his money save his innocent grandson or cheat justice?

P.Q. Winston Rutledge is the richest man in Copper City, Arizona, and he believes someone will soon try to kill him. The story quickly deteriorates into murder, and the ambitions of relatives in pursuit of his fortune. P.Q.’s family is a collection of oddballs with a common bloodline. Fascinating people you’d love to have at your next dinner party, but each comes with their own set of secrets and entanglements. P.Q. is survived by a widow, the same age as his daughter, and two sons, one of whom - well, you’ll have to listen to the story. You won’t be sorry you did.

In 1938, Frances Hopkins ran away from home to chase the glitz of movie stars and the titillation of rubbing shoulders with gangsters. Her older sister, Calandra, hires Matt Kile to help locate Frances and bring her home safely. Matt and Callie soon find themselves embroiled in a torrid romance wrapped in the magic of the Golden Age of Hollywood.