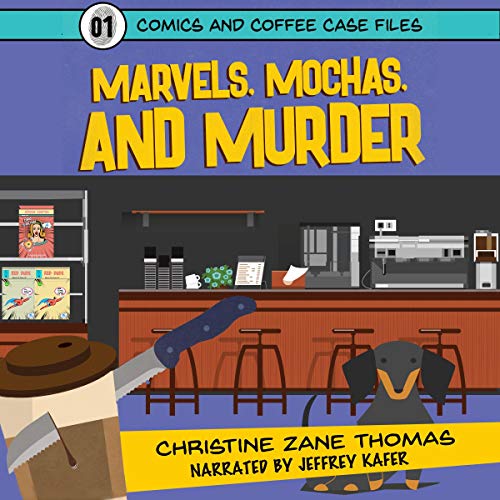 The only suspect to his best friend’s murder....

When Kirby Jackson’s friend Ryan is found dead in the comics and coffee shop the two co-own, Kirby quickly becomes suspect number one.

Perhaps things wouldn't look so bad had Kirby not been planning to cut Ryan out of the business.

The only witness to the crime, Ryan’s stubborn dachshund, might hold the keys to solving the case. But his attitude toward anything and everything that isn’t his warm doggy bed is less than helpful.

With a local detective and former high school crush investigating the murder, it's up to Kirby to put together the clues. Otherwise, he's doing 25 to life.

Comics and Coffee Case Files is the perfect series for dog-loving fans of The Cat Who. Check out the first installment in this quirky series today.

What listeners say about Marvels, Mochas, and Murder

Amazing start to the series. Really enjoyed the narrator delivery and pace. Ready for more!

Although I tend to associate the Cozy Mystery genre with small villages in the English countryside, I have to say that other than locale, "Marvels, Mochas, and Murder" fits very nicely into realm of Cozy Mysteries. Small town, seemingly regular folks, secrets, and (despite the requisite murder) a lighthearted tone, are all here. Comparisons made by other reviewers, to the American TV show "Psych" make sense, as far as the lightheartedness, charm, and occasional humor. And like the pilot episode of a TV show, this short book is the start of an ongoing series.
I received a free copy of the audiobook, in exchange for an honest review. And honestly I very much enjoyed it. The narrator fits the story well, comfortably carrying the story along, convincingly sounding like a small town, regular guy, shop owner, who is suddenly thrust into the heart of a murder mystery.
I liked this well enough to go ahead and buy the second audiobook in the series, "Lattes and Lies" (from the same author and narrator), which I look forward to diving into soon.

This is an amazing start to the series. I love the characters especially Gambit. The storyline s well written and I really love the little twist. I can't wait to read more from This author. The narrator does a phenomenal job his voice really is sultry and smooth. I received this audio book at my request. I am leaving my honest review here of my own volition.

I found the story and narration to be enjoyable. (It is less than 4 hrs length.)

etter than expected - this was a fun and exciting read!
Ryan and Kirby are friends - and they own a coffee shop which is also a comic book store. The two businesses do not really interesect as they had hoped. But they still try to make it work. When Kirby decides that it is time that the little experiment was brought to a close and continue the shop without his friend, he does not expect things to go smoothly. Things get a whole lot worse when a murder occurs! Performed very well, the plot does not get heavy or indulgent.
the cozy mystery is a new genre to me and I thoroughly enjoyed it. it was an exciting mystery that has enough twists and surprises to keep the reader engaged. while I read a lot of hard boiled crime, it was nice to read a story that didn't have gruesome crimes. the characters were likeable and the setting was vivid.

This was a great series starter. I loved the story, it was light. The narrator did a great job. Excited for the next one.

Loved this book. Wittingly told story in a modern-day setting with a very identifiable main character.

A Fun, Fervent and Fantastic Adventure!

Written by Christine Zane Thomas and William Tyler Davis and narrated by Jeffrey Kafer, Marvels, Mochas, and Murder is book one of the Comics and Coffee Case Files series. It's a fun and intelligent adventure that's overflowing with style, and Kafer brings a great amount of passion and personality in his solid narration. This one is easy to recommend for fans of fiction and mystery novels.

The story follows Kirby, who lives in apartment above his coffee/comic shop. He co-owns the business with Ryan, his childhood friend. Ryan is always accompanied by his Dachshund, Gambit, who's easily one of the strongest characters. After a murder takes place, a full cast of interesting, likable characters are introduced. No individual comes across as pointless or out of place; each one plays a key role in the adventure. The dialogue is quick and witty throughout, and it lends to the believably of the characters. There is good pacing, with plenty of exciting twists. It's not easy to guess who the culprit might be. It all wraps up with a satisfying conclusion. My only complaint is that it was over so quickly, clocking in at just three hours and 20 minutes.

Jefferey Kafer was the ideal choice to narrate this work. He has a low, gruff voice that lends perfectly to the mysterious tone of the book. He does a great job expressing emotion, personality and passion in each of the characters. He maintains a unique tone for each, so it's always easy to know who's speaking. He keeps the pace quick and smooth, while never mispronouncing words or fumbling over passages. I don't have one complaint with his performance. I'm eager to hear the other projects he's worked on.

Marvels, Mochas and Murders is full of passion and heart. Thomas and Davis do an excellent job crafting a relevant world with plausible characters. The narrative is quick and compelling, and Kafer brings it all to life with his expressive, fervent narration. It's a shame that it was over so quickly! I can't wait to follow Kirby on his next adventure.

A mystery for your inner nerd...

What’s it about? Ryan and Kirby have been best friends since sixth grade and now, as adults, they own a coffee and comic book shop together. Unfortunately Ryan’s extracurricular activities have finally done him in, or so it is thought. Kirby is left caring for Ryan’s dog (Gambit), the store, and trying to solve the murder. There’s D & D, comic book and coffee knowledge, and some pop-culture references mixed in. I listened to this in one sitting and it held my interest the entire time- despite the shorter book, there are enough characters to keep you guessing.

The narrator, Jeffrey Kafer, did a good job with this. Easy-to-listen-to and smooth narration all around.

Overall I highly recommend, especially if your inner geek is looking for a light mystery.

Comics, Coffee, and Murder is a Fun Mystery. This is a good start to a series. The Narration was amazing as well and did a great job with all of the characters. So go ahead and dive into this mystery.

At the time of this review, Audible did not have chapter titles for this title.

This title was provided free for review, however, this review is my honest thoughts and opinions.

A ham and pineapple sort of day

Marvels, Mochas and Murder, is the perfect cozy for lovers of coffee, comics and Dungeons and Dragons. Or dogs. It is a quick, fairly lighthearted read based around a just she giving recently opened face where the coffee is good but the sales of comics, the other side of the business didn't seem to be working out. Then one of the two owners was murdered, the other set up to take the blame. Fortunately the town was the sort where pretty well everyone knew each other rumours abounded and a new culprit was looked for (the surviving partner basing his investigative skills on Castle, the TV series).

This is a fun read: no depth of character of even an enterprising investigation, just a mooch through the lives and loves mostly ex, of the main protagonists. These are given life by narrator, Jeffery Kafer, whose deliciously drawling voice as the coffee loving Kirby, who tells the tale from first person perspective, is a pleasure to hear. With good intonation and great pacing, the story unfolds to a satisfactory ending. Short and sweet, perfect for an understanding afternoon listen.

My thanks to the rights holder of Marvels, Mochas and Murder, who, at my request freely gifted me with a complimentary copy. Most enjoyable, apart from the dog licking faces, not something I enjoy even at a distance, and I know nothing about the D & D world, either. But that didn't matter, it didn't interfere with the story. A nice, fun cozy - and you can almost smell the coffee.

Mr Kaffer makes me want to listen to everything.

Great book made even better by Jeffrey Kaffer I could have listened to another 3 hours . Although everything wrapped up nicely in the 3hrs 20mins 🙂