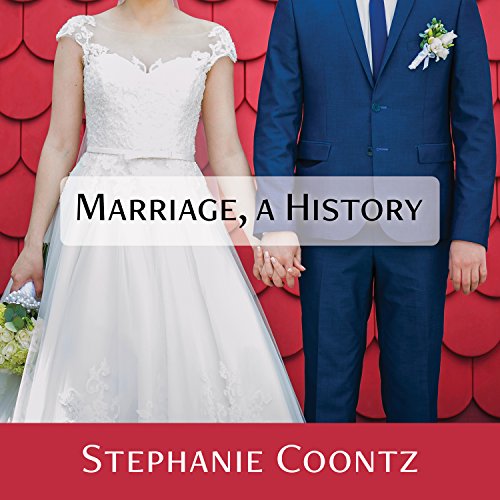 By: Stephanie Coontz
Narrated by: Callie Beaulieu
Try for $0.00

Just when the clamor over "traditional" marriage couldn't get any louder, along comes this groundbreaking book to ask, "What tradition?"

In Marriage, a History, historian and marriage expert Stephanie Coontz takes listeners from the marital intrigues of ancient Babylon to the torments of Victorian lovers to demonstrate how recent the idea of marrying for love is - and how absurd it would have seemed to most of our ancestors. It was when marriage moved into the emotional sphere in the 19th century, she argues, that it suffered as an institution just as it began to thrive as a personal relationship. This enlightening and hugely entertaining book brings intelligence, perspective, and wit to today's marital debate.

What listeners say about Marriage, a History

Marriage from a secular feminist's perspective

I purchased this book to learn a bit more, as the title indicates, about the history of marriage, and the book provides plenty of insights, but beware: all of the information provided in this book is stacked on one side of the -- what has now sadly become an -- argument. The facts presented prop up a certain world view that I personally do not subscribe to, secular feminism. The author presents fact after fact and study after study of how horrible marriage has been for women. I would have liked to have been presented with facts that are not so biased towards one side. For example, the author points out that now that we have no-fault divorce and women's liberation, and therefore, women are much happier now than they ever have been; but that are also studies that point out that women are not as happy now as they were in, say, the 1950's. Furthermore, the author fails to offer any objective critique of feminism and its negative effects on marriage and children, although the author does intimate that this has caused a rise in the divorce rate, a worthy sacrifice, in the author’s view, on the altar of progressive feminism. Of course, feminist are quick to shout “correlation not causation,” but frankly, we get a strong sense, after pondering their rhetoric, that even if causation were proven, feminists would regard the harm done to children as justifiable to meet the emotional needs of women. (No; feminists have not done a good job offering evidence, and yes, given the radical changes to the institution of marriage that they demand, the burden of proof is on them, too). And then there are the dogmatic assertions made by the author, such as “gay marriage is here to stay,” and “alternatives to traditional marriage are here to stay,” assertions that are made without any historical context, which offers strong evidence to the contrary (see “Family and Civilization” by Carle Zimmerman). The author also ignores gender differences, and especially the emotional needs of men within marriage, although the author gives copious print to the emotional needs of women. In fairness, there are some thought-provoking interesting historical facts brought to light in this book, but in light of the author’s obvious bias, the reader is left with an entirely incomplete picture of the history of marriage. If the book were instead titled “The History of Marriage from a Feminist’s Perspective,” the book would have been more honestly and appropriately titled.

Narrators Need to Educate Themselves

The book is excellent. The narrator is horribly unprofessional. Don't guess at pronunciation if you are narrator! The reader evidently knows nothing of history and keeps referring to "Samuel Pepiss" for Pepys. It's grating and embarrassing and detracts from a valuable text.

Also, the narrator pronounces nuclear "nuke-you-ler" about a thousand times. Nuclear families are obviously going to come up a lot in a book like this, and every time it did it made me physically cringe.

Book was a great look at marriage throughout history. Would have preferred the most current section covered marriage world wide rather than just western history but it would triple the size and scope so I am not complaining and may go on a hunt for what I’m missing out on in my education.

What an interesting, informative book this is! Sadly the listening experience itself is marred by the narrator's weirdly mechanistic reading style (as well as soooooo many mispronounced words). I swear I sometimes think that Audible has a computer program "reading" some of these books. And I wish they'd stop.

This book is great because it gives an expansive review of the institution of marriage across thousands of years and many cultures. However when we get to modern(ish) time around 1700 and onward, it fixates on the United States and western Europe rather than continuing to provide a holistic review of marriage across the globe. I think I heard about West Asian traditions a handful of times and legitimately never when the time period became modern. This is no fault of Ms. Coontz as I know she was proving her argument that 'western' societies are experiencing unprecedented marriage evolution. I did learn a lot. I will turn my attention to other authors to get a better handle on other global regions' marital history into the modern age.

I loved the information presented in this book, but the reader was a little too monotone for me. It was like listening to Siri read.

I nearly deleted this audiobook over the poor performance. It makes the author seem clinical and unfeeling. I saw a video interview with the author, however, and realizing she is in fact human and has passion for her work, so I decided to see what else she had to say within this book.

That said, the narrator is horribly robotic. I’m sure she could be worse, so I won’t give one star. But I find myself sometimes struggling to pay attention. Also, she pronounces the word nuclear “nuke-u-ler.” Embarrassing. I am shocked no one bothered to correct this.

What did you love best about Marriage, a History?

No. It has a lot of information about time periods that span all of recorded human history. I wanted to take the time and digest what I was listening to and place it in my minds web of history

I had to speed up the reading speed to about 1.15-1.20. It just felt too damn slow before that. It is my only criticism of the reader and easily adjusted.

A fascinating read that explains just how much of what people think of as "traditional Marriage" was a recent, short-lived invention. Full of fascinating tidbits and interesting themes that aim to summarize sweeping historic trends.

This book was so interesting from start to finish. Every chapter, from the ancient world to the 21st century, was riveting. I had no idea how much and how frequently our ideals of marriage change and continue to change. It has really made me feel differently about marriage as a whole, but on a much more positive level than I expected. It is fascinating how much marriage affects our society, and vice versa.
TIP: Listen to it a x1.5 to stop the narration from dragging a bit.