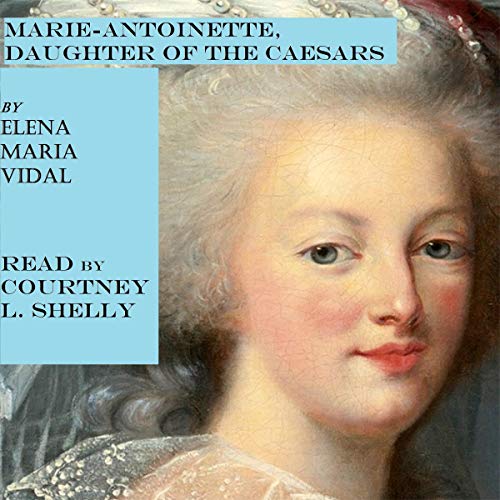 Marie-Antoinette, Daughter of the Caesars

By: Elena Maria Vidal
Narrated by: Courtney Shelly
Try for $0.00

Marie-Antoinette, Daughter of the Caesars is about the life, death, and legacy of Louis XVI's tragic queen, based upon the author's 30 years of research. Whenever possible, the historical persons speak for themselves out of memoirs and letters.

Marie-Antoinette is seen in light of her Imperial heritage as a child of the Habsburg dynasty. Having assumed the crown of the Holy Roman Empire in the 1400s, the crown that had originated with Charlemagne in the year 800, they were seen as the continuation of the Roman Empire of the West. The Habsburgs and their allies kept the Muslims from overrunning Europe at both the Battle of Lepanto in 1571 and at the battle of Vienna in 1683.

The fall of Marie-Antoinette, as both queen of France and the youngest daughter of the Imperial family, is indicative of the end of Christian civilization and the birth of the secular state, which was the object of the French Revolution. Through her death, Marie-Antoinette has been dubbed “Martyred Queen of Christian Europe” for in killing her, the revolutionaries also symbolically killed all that she represented, the ancient heritage of Christendom.

What listeners say about Marie-Antoinette, Daughter of the Caesars

This book had tons of new tidbits I previously didn’t know about Marie Antoinette as well as corrections to facts I THOUGHT I knew. As it turns out much of the “common knowledge” about this remarkable woman lacks context or according to this author is flat out false.
It was really very interesting and the whole book just flew by. The narrator was smooth and unobtrusive, had a very pleasant cultured voice, and did a fantastic job with a LOT of French to pronounce. I’m easy bumped by narrators that mispronounce words or try accents they can’t pull off - not a problem with this book and narrator. Definitely worth the credit.

Elena Maria Vidal has done a great service to history by exploding many myths surrounding the little understood Marie Antoinette-the beautiful queen of France who died by guillotine in the French Revolution (1793). Most of us only remember her as a selfish queen who looked on the trials of poor people and said " let them eat cake". This image is far from the truth. Thanks to decades of exhaustive research, Vidal portrays a queen martyr -courageous in faith and ultimately loyal to her husband in his last agony and execution.
The narrator, Courtney Shelly has a pleasant voice, capable of navigating the pronunciation of French words with aplomb. Despite the monumental research involved in the writing of this book, Vidal still has a compelling narrative that keeps the listener coming back for more of her tragic story.

Christian Virtue Not Debauchery and Irreverence

By now, most savvy audiobook and physical book buyers know you must discern who wrote a biography or history and what is their ideological and methodological slant. I've read almost all of the biographies of Marie Antoinette and as a professional historian, I know that Elena Maria Vidal got it right with "Marie-Antoinette, Daughter of the Caesars." Instead of the prevalent views portrayed in recent fluff-piece movies and popular books, Vidal has captured her essential qualities and authoritative historiography in an accessible, entertaining, and what is essentially a Christian view of a devout Catholic queen. Readers of any religious confession can be informed and edified by this much-needed correction of the "let them eat cake" myths that surround this martyr of the French Revolution. One small example is Vidal's clearing up what the French word dissipation actually means —love of distraction, not the love of fast living — which only a scholar of all things French would understand to be faux amis. The secularists have taken it and run with it!

This biography is of great interest to Catholic readers who'd appreciate the devotional quality of this historical - not ahistorical - view of the Queen's life and French history which is greatly tainted by modern prejudices and secular blather.

This is more of a lineage. I was expecting more in

This has very little to do with Marie Antoinette. I am very disappointed. I expected this to be more specifically about her from a historical view. This more of a family tree with endless branches.

I’ve listened to many audiobooks on Marie Antoinette, this is is by far the worst narrator I’ve ever heard. It sounds as though she is reading for the first time. None of the French words or names are pronounced correctly (sometimes pronounced many different ways) and even some English words are clumsily pronounced, leaving me confused and unable to realize who or what is being referred to. Her reading of sentences are erratic and haphazard. The text itself is informative, but it is very hard to concentrate while the narrator is doing such a bad job.
I hope it is re-recorded with a more skilled narrator, it’s very hard to get through.