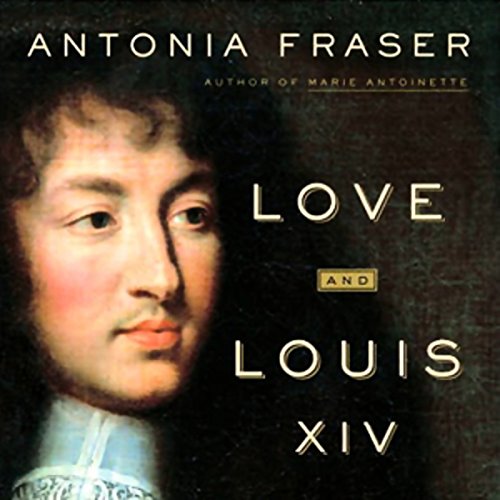 By: Antonia Fraser
Narrated by: Rosalyn Landor
Try for $0.00

The superb historian and biographer Antonia Fraser, author of Marie Antoinette, casts new light on the splendor and the scandals of the reign of Louis XIV in this dramatic, illuminating look at the women in his life.

The self-proclaimed Sun King, Louis XIV ruled over the most glorious and extravagant court in 17th-century Europe. Now, Antonia Fraser goes behind the well-known tales of Louis' accomplishments and follies, exploring in riveting detail his intimate relationships with women.

The king's mother, Anne of Austria, had been in a childless marriage for 22 years before she gave birth to Louis XIV. A devout Catholic, she instilled in her son a strong sense of piety and fought successfully for his right to absolute power. In 1660, Louis married his first cousin, Marie-Thérèse, in a political arrangement. While unfailingly kind to the official Queen of Versailles, Louis sought others to satisfy his romantic and sexual desires. After a flirtation with his sister-in-law, his first important mistress was Louise de La Vallière, who bore him several children before being replaced by the tempestuous and brilliant Athénaïs, the Marquise de Montespan. Later, when Athénaïs' reputation was tarnished, the King continued to support her publicly as Athénaïs left court for a life of repentance. Meanwhile, her children's governess, the intelligent and seemingly puritanical Françoise de Maintenon, had already won the King's affections; in a relationship in complete contrast to his physical obsession with Athénaïs, Louis XIV lived happily with Madame de Maintenon for the rest of his life, very probably marrying her in secret. When his grandson’s child bride, the enchanting Adelaide of Savoy, came to Versaille she lightened the King’s last years - until tragedy struck. With consummate skill, Antonia Fraser weaves insights into the nature of women’s religious lives - as well as such practical matters as contraception - into her magnificent, sweeping portrait of the king, his court, and his ladies.

“Excellent...a pleasure to read throughout.” (The Wall Street Journal)

“Highly readable....with vivid wit, Fraser demonstrates that within the edifice of the monarchy there were deep crannies of ordinary affection.” (The New Yorker)

“Entertaining and instructive...we must still be grateful to Antonia Fraser for devising so excellent a companion with which to lie back and think of France.” (The New York Times)

“Engaging...the sumptuously illustrated Love and Louis XIV focuses on the diverse array of women who ‘lit up the court of the Sun King.’” (The Washington Post)

What listeners say about Love and Louis XIV

I was really surprised to find that Louis was a great husband and a very decent human being. I became fascinated by other characters in the book such as his young granddaughter-in-law. This is a wonderful book for people who appreciate excellent research and strong characters who really lived. Just loved it!

This book does a very good job of capturing life at the court of the Sun King. It not only focuses on the brilliance of the court and the king but also his disappointments, his failures and his losses. And he lost a great deal, especially in his later years.

An incredibly important historical figure, the Sun King was so much larger than life it would be easy to create a caricature of him. Ms. Fraser avoids the easy road and makes us realize that someone, who in his time was revered and reviled on the same level as God and the Devil, was also a human and his life was shaped by very human tragedies.

Sometimes the authors biographies read almost like fiction. She can glamorize and idolize a person to the point that you know it cannot be accurate. She doesn't do that in this book. Perhaps because it would be hard to conceive of Louis being portrayed as more glamorous and more idolized than he actually was in real life.

The book is a little slow in the beginning but once it gets going...it's an amazing journey. Hearing about the loves of Louis makes you realize how constrained life was for women. Some were major influences, others just toys to entertain a king. If you enjoy the detail of how daily life was for the king and his ladies this is the book for you.

The title might suggest a worldly look at the salacious side of Louis's character. There was a good deal of the salacious in the king's life, but Fraser does an excellent job presenting the equally important reality of religion and its morals in the lives of the king and the women surrounding him. Much scandalous behavior reported by gossip is weighed against the subjects' sincere adherence to Catholic piety and dismissed as unlikely. What we are left with is a sympathetic but unapologetic look at the life of the Sun King and the even more remarkable women (Mme. De Maintenon, Athénaïs, Liselotte etc.) in his orbit. Many of the leading churchmen of the era are also praised (-as the were at the time) for there courageous preaching of moral theology at a decadent court.

I think some parts of the book may be confusing without an acquaintance with the history of the period. One thing I would have wished for is slightly more in-depth coverage of political and international affairs, which are here often mere background to the character of the subjects. But the characters themselves are so fascinating that the book remains a good listen.

Rosalyn Landor does a fine job presenting the prose. The scolding, grown-up tone she adopts when quoting the king is, I believe, not quite right but not too distracting. Her French pronunciation, always a challenge in an audiobook like this one, so full of names, is pretty good.

This was my second audiobook, and I loved it and could hardly put down my iPod. This book helped me walk and walk for miles. I am a fan of French and English history and royalty, and the narrator brought this period to life with her sophisticated language skills. Her pronunciation of the French words was fascinating, although I am definitely not an expert. Antonia Fraser is a fine writer, too, and I enjoy all her books for their well-researched details.

Highly recommended, if you enjoy this time in history and are interested in the psychology of relationships.

The story of the fascinating Louis XIV drowns in and disappears in the author's mind numbing relaying of the endless details. I enjoy historical information, I guess I don't care for this author's style of presenting it. This is my second book by Frazier, both were good when the story of the title subjects were at the forefront, boring when the endless lists of facts were recited.

I love history and the history of le Roi Soleil is fascinating and scintillating! He is such a contrast of characteristics - debauched, yet pious. Lady Antonia Fraser captures all of this in a way that makes this book hard to put down or in the case of Audible, hard to turn off!

Extremely well narrated. Good pace & a lovely enjoyable narrator to listen to. Yes, I found myself rewinding sections as the multiple persons became muddled- however this is to be expected, much as if one was reading the book, given the interwoven lives at court.

shaped a multidimensional story of what occurred in Louis IV's court, and in that time.

Bright illumination of the Sun King

prior to this Audible presentation, I knew very little about Louis X1V.
Now I feel like an illegitimate Duke whose bloodline has lapsed into the twenty first century.