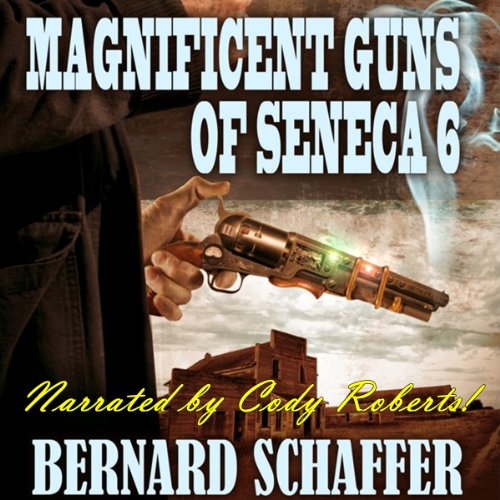 By: Bernard Schaffer
Narrated by: Cody D. Roberts
Free with a 30-day trial

Combining the best of gritty westerns like Tombstone and The Wild Bunch with the sci-fi inventiveness of Firefly and Star Wars, Bernard Schaffer's Guns of Seneca 6 series is an Old West romp on a remote planet where gunslingers, outlaws and lawmen battle over the frontier.

In this jaw-dropping sequel, newly-appointed Sheriff Jem Clayton just can't get used to being an upstanding citizen. People only seem to want to complain to him about all sorts of trivial things and he just can't fake being interested anymore. When a wagon full of bank robbers show up, it's time for Jem to unload his frustrations in more ways than one.

Soon, Jem is embroiled in an adventure with a crazy old preacher to hunt down a bandit posing as Jem's former alter-ego "Gentleman Jim," except this one is selling kidnapped women to off-world slave traders. The three Beothuk boys from the first book return to take on a quest in search of a new Chief for their tribe. Their journey brings them into the company of a fanatical rebel Beothuk who is preparing to make war on the white settlers. It won't be long before Jem's Colt Defeaters are firing and the lead starts flying in this non-stop, action-packed sequel to Guns of Seneca 6.

Seneca 6 is a world where legends like Doc Holliday and Jesse James would all feel comfortable in. Listeners will too. The Guns of Seneca 6 series blends the best of the Old West and science fiction for all-out adventure.

What listeners say about Magnificent Guns of Seneca 6