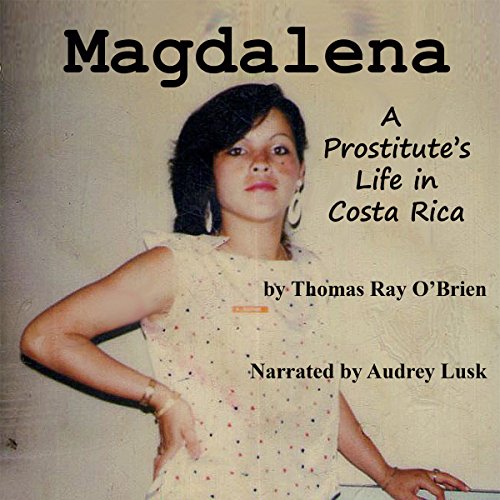 Beginning with her dirt-poor childhood, her alcoholic mother, and pedophile step father, through her days as the "star prostitute" of the El Jardin Hotel and beyond, hear Magdalena's tale of sex, drugs, violence, love, and survival.

"I already had a baby girl and was divorced by the time I was 14. I was a mother now, but I was still young, cute, and very popular with the boys. I liked sex, and I had a lot of boyfriends. They would share their marijuana with me and their beer or rum or glue or whatever they had, and we'd have sex. I liked sex and drinking and the drugs. The sex was just one part of it all.

"But I was still very poor. I worked for a few weeks at an ice cream factory, but I didn't like it, and I hardly made any money there. One of my boyfriends told me about a place I could earn money just by having sex with gringos: the Hotel El Jardin. He said he thought I'd be better off being paid for sex by gringos than giving it away to the local losers. So I decided to try it."

What listeners say about Magdalena: A Prostitute's Life in Costa Rica

I’m not quite sure how to review this audiobook. It’s a bit unclear as to if this book is actually a biography or a story cobbled together based on some true life events and the authors creative license. I usually like books that have a bit of grit to them regardless of if they’re fiction or not but I prefer to know which especially when they’re written in the way this one is. The tone the book is written in is very nonchalant. I found it hard to identify or empathize with Magdalena in any way. There is no humility in her. There is talk of all sorts of sexual abuse, drug abuse, domestic violence and more and it is all done very flippantly. It is all relayed with almost no feeling. I remember thinking as I was listening to the audiobook that it had to have either been written by a man who truly had no understanding of the subject at hand because of the callousness in which the book was presented or it was translated and written, word for word, from a recording of the real person telling her story to the author. There was just no ease or flow to the story and the narration was very jerky. I had to really struggle to get through it being that it was a fairly short book.

could not stop listening

I tend do get distracted when listening to audio books. Not this one! I loved it
So real, raw, and emotional.

There's no plot to this story. Just disjointed story connected with repeating story. The book jumped around and sometimes repeated the exact same words telling a story from chapter to chapter. It's mostly a woman looking back over parts of her life, regretting most of the decisions she's made...all except being a prostitute.