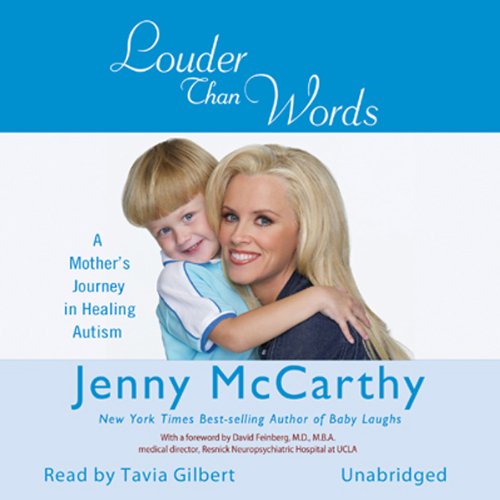 By: Jenny McCarthy
Narrated by: Tavia Gilbert
Try for $0.00

One morning, Jenny McCarthy sensed something was wrong and ran into her two-year-old son Evan's room to discover he was having a seizure. In that moment, Jenny was thrust into the midst of a medical odyssey. After numerous misdiagnoses and many harrowing, life-threatening episodes, Evan was finally diagnosed with autism. Jenny didn't know what to do next and found herself alone, without any resources except for her determination to help her son.

Realizing that she'd have to become a detective, Jenny spoke with many doctors, parents, governmental agencies, and private foundations, and became an expert at Google research. At last, she discovered a combination of behavioral therapy, diet, and supplements that became the key to saving Evan from autism. Here, she shares her experiences and knowledge and offers a roadmap for other concerned parents.

What listeners say about Louder Than Words

Grateful for this story

As a grandma of a newly diagnosed Autistic grandson, it was enlightening and educational to hear Jenny's journey in helping her son. As heartbreaking as it is; it is also breathtaking to see her perseverance pull her son through the window. It gives us hope! Thanks you for sharing your story. We are on that journey now. And we will pull him through that window too! Many blessings to you and you son! ❤️

I can't thank you enough

I am a single dad ( a man version of Jenny) who has made up his mind to be the love his sons needs and this book was full of love,hope and I would like to thank Jenn

Please please please read. Forget what you’ve heard about Jenny McCarthy. It’s your child’s life. It’s worth listening to 1 book, even IF it could be a load of bull...which this book is NOT. So much good info :)

All this time I heard that she was anti-vax.

My 20 month old was diagnosed recently. Prior to this I had always heard and assumed that Ms McCarthy was pushing anti vaccine rhetoric. She isn't. She is asking for us to challenge the schedule of vaccines and asking moms to know what we are putting into the bodies of our children whether it is food, drinks, antibiotics and yes even vaccines. She gives good guidance about HER experiences and what worked for her child.

Very informative and interesting. Definitely some things to check out with my three grandsons on the Spectrum.

Laughed and cried through this story. Thank you for sharing your story. For a moment I didn’t feel alone, with my child’s autism diagnosis.

Woe is me attitude displayed by negative reviews

I just found out that my son has autism and it devastated me thinking how he won't grow up to be a normal kid but this book gave me hope! thank you so very much!