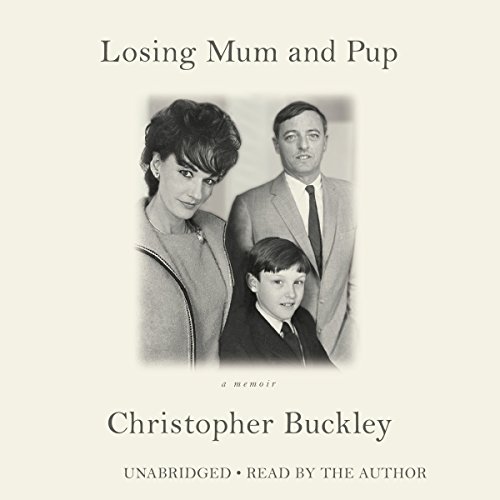 In 12 months between 2007 and 2008, Christopher Buckley coped with the passing of his father, William F. Buckley, the father of the modern conservative movement, and his mother, Patricia Taylor Buckley, one of New York's most glamorous and colorful socialites. He was their only child and their relationship was close and complicated. Writes Buckley: "They were not - with respect to every other set of loving, wonderful parents in the world - your typical mom and dad."

As Buckley tells the story of their final year together, he takes listeners on a surprisingly entertaining tour through hospitals, funeral homes, and memorial services, capturing the heartbreaking and disorienting feeling of becoming a 55-year-old orphan. Buckley maintains his sense of humor by recalling the words of Oscar Wilde: "To lose one parent may be regarded as a misfortune. To lose both looks like carelessness."

Just as Calvin Trillin and Joan Didion gave readers solace and insight into the experience of losing a spouse, Christopher Buckley offers consolation, wit, and warmth to those coping with the death of a parent, while telling a unique personal story of life with legends.

What listeners say about Losing Mum and Pup

The New York Times review left me with the impression that this might be a bit snarky, not so much in a "Mommie Dearest" way but perhaps more as an uncomfortable intrusion into famous family private matters. It was anything but that. Christopher Buckley gives us a very thoughtful, heartfelt and self-deprecating account of how he went through the difficult times that we all must face as some point. It's a nice balance of the amusing and sad, including some wonderful family anecdotes. I don't think it takes anything away from the iconic Buckley family luster. Highly recommended!

I have never read any of Mr. Buckleys books. This one is so well written, endearing and perfectly narrated. I have added ALL his other books onto my Wish List.

Buckley Gets It Right

Having lost both parents this year I was not sure how Mr Buckley's experience could possibly parallel mine. Not only was there a parallel but there were many, many experiences that were exactly like mine. I laughed, cried, took notes and told my friends. I am profoundly grateful to Christopher Buckley for sharing his most emotional, intimate thoughts and experiences about his Mom and Dad and for making my grieving a bit easier.

Sounds like a cliche but you'll laugh, you'll cry...I loved that this was narrated by the author, I don't know if anyone else could have done it justice. Alternating the happenings of the losing of his parents with remembrances of their remarkable lives, he paints a picture of a uniquely American family.

Provides a Bit of Humor and a Great Reality Check

As someone dealing with elderly parents myself, I was reluctant to read this book. And I have never been a William F. Buckley fan. But I thought his son Christopher was a talented writer and the book came highly recommended.

I am very glad I read this book. It is a brief account of the end of his parent's lives. And it seems to me to be written with honesty, humility and humor. His love for his parents is evident and the crazier they get, the more stressed out he becomes, the more his love and respect is obvious.

It is full of wickedly funny anecdotes, a great deal of sadness and, I think, equal parts of joy. Most importantly, while I do not know the subjects of the book or the author, beyond the caricatures one sees on TV, I think it was based on a great deal of truth. The description of planning his father's funeral and memorial service, all the conflicting personalities, booby traps and ticking time bombs that had to be overcome, made planning the D-Day invasion sound like a piece of cake.

This book is worth reading, whether you are at a point in your life where you identify with the situation, or you are not. I cannot recommend it highly enough.

Not familar with Mr. Buckley's other works or all that familar with his famous father (other than name). I found this to be an honest; and riviting account of a son loosing his parents. Rich or poor; young or old..some truths stand true for all - we have a life beginning and a life end.
Elequantly written with all the honesty of someone has lived the experience; and has put that experience to paper. Reguadless of his famous name - he lost mum and pup; and tells a poinant tale of the difficult journey of becoming an orphan at age 55.

Loving and losing your famous parents

Chris Buckley describes what it is like to grow up with famous, eccentric, and,yes, difficult parents. But he doesn't whine and he doesn't complain. Most importantly he doesn't blame. He simply tells the story of his Mum and Pup in their glory years and in their decline. It felt like an honest, loving story of his relationship with his parents and trials of losing them both over a short period of time. I loved this book. I could feel the emotion, but I could sense Buckly trying to be objective. It worked. Read it. You will like it.

Not Just About Losing

My own father was an avid fan of William F Buckley. This got me interested, along with the fact that, like so many, I am dealing with the struggles of an aging parent. Never having read any of Christopher Buckley's material, I didn't know what to expect. Well, despite the subject matter, I found myself laughing out loud in many places throughout the book. It isn't all about the end of life issues, and some of those narratives are funny as well. So the book has given me consolation and laughs at the same time. The author is very talented as a writer and even adds to the words as a narrator.

Christopher's book is a love story between himself & his mother & father. very well narrated. Even has the " Buckley" humor. i

Engaging story of parents, children and the aging and dying process that will affect us all.