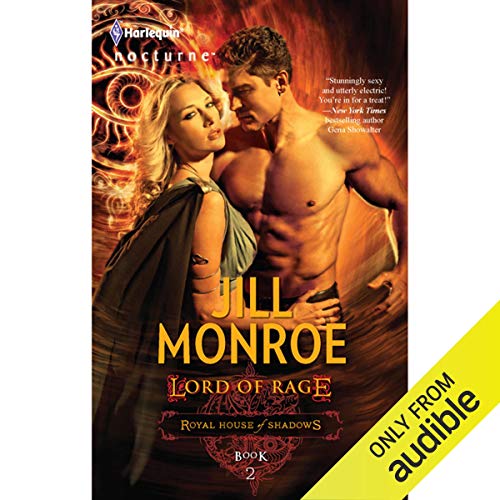 By: Jill Monroe
Narrated by: Elizabeth Audley
Try for $0.00

Once upon a time… the Blood Sorcerer vanquished the kingdom of Elden. To save their children, the queen scattered them to safety and the king filled them with vengeance. Only a magical timepiece connects the four royal heirs. Now they must return and save Elden…and time is running out….

Princess Breena had been dreaming of her warrior lover when she was ripped from her Elden castle and thrown into a strange, dangerous realm. Lost and alone, she prayed for survival and vengeance for her stolen kingdom. She found both in a woodland cottage… in a dark bear of a man.

The golden-haired beauty had eaten his food and slept in his bed when Osborn found her. Though he wanted to awaken his virgin princess to carnal pleasures, Breena wanted more—including his warrior skills. Skills the once-legendary mercenary had long buried. Now Osborn had a choice—risk his life or deny his princess her fairy-tale ending.

What listeners say about Lord of Rage

Nice spin on a fariytale theme

I really enjoyed this book. I didn't think I would like an adult version of "Goldilocks and the Three Bears" but it worked for me. There is no mama bear or papa bear (thank you) but the reference to the fairytale is really funny. The narration is excellent and is much better then the first book in the series.
If you read my review of book 1- Lord of the Vampires then you know how much I disliked the narrator and the overall story. I'm happy to say this is not the case for Lord of Rage. I really enjoyed the story and will continue on to book 3.

Elden's Goldilocks and her Berserker

This second installment of the tale of Elden is the sexual romantic version of Goldilocks and the three bears. But there is no mama or papa bear and it is not a bedtime tale for the young. Our heroine Breena,is princess with attitude and the hero Osborn alias papa bear is vengeance driven berserker. Funny how Jill brings it all together is a good story that pushes the tale of Elden onto to the next stage. The length of the story is just right. The narration was done well. I enjoyed the tale and these stories are different from your average tale. I am enjoying these authors drawing on the fairy tale aspect to create these stories.I think if you remember the Grimm tales they really weren't fluff pieces.

A good story and pace, but was a little bit of let down at the end. Narrator is excellent. Overall I was very pleased with this book, but you really need all 4 books and listen to them in order to follow the overall story line. This is a new author to me and I will be looking for more of her books.

Absolutely Amazing. Very Exciting and so full of Amazing twists that will keep you on the edge of your seat.

It is nice to learn that they lived to have the know who was responsible for the betrayed of the people of Enden. The only girl of the famy also have their own abilities and she learning to defending her rights and her honor was the best thing she ever done. Now the center is set for them to fight and protect their people.

This was good. The Hero was very resistant to protect the heroine. Personally, I like a hero who goes after what they want. I would suggest reading/listening to the first book. It’s a continued storyline with different couples in each book. Overall I liked it, I just prefer less resistance. The narrator for the audiobook was good. I enjoyed her performance.

I'm in love with this story

Love this story. Good narrator much better than the last one. Adventure, sizzle, and romance. I just wish that there was more to this story. I definitely recommend this one. A must listen/read.

over all good book

I have to laugh at the Goldilocks and the Three bears reference at the beginning. A little better than the first.