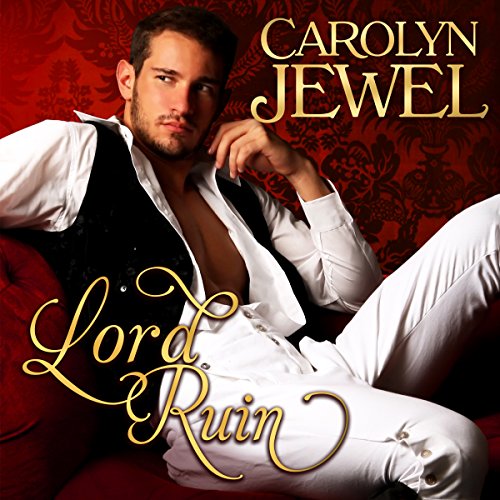 By: Carolyn Jewel
Narrated by: Kate McDermott
Try for $0.00

Ruan Bettancourt, the Duke of Cynssyr, intends to marry London's most beautiful debutante. A case of mistaken identity forces him to marry her sister, spinster Anne Sinclair. Before long, he's head-over-heels in love with his wife while Anne is determined to make the best of her unwanted marriage. Can Lord Ruin convince Anne he's fallen in love?

What listeners say about Lord Ruin

I read this book a few years ago and really enjoyed it and was really happy when I saw it available in Audible. What ruined Lord Ruin was the narration. Ms. McDermott's lack of experience is evident and she should try changing her voice for the different characters that are part of the story line. When the narrator is unable to change voices, the reading comes across as flat and monotone. Some really good examples are Anne Flosnik and Susan Duerden whose narration of historical romance books are a listening joy. I hope that Ms. McDermott will continue narrating books as she has an authentic accent. I just hope she will practice the male voices and learn to make each character stand out.

I liked this story, I disliked the narration. It was so slow it put me to sleep! I sped it up and it was ok, still slow at times and sometimes a speaking character talked a little fast, but it was worth it to get thru the book. I didn’t think I would the first few times I tried it!

There is a LOT of sex.... it’s not crude although it’s quite explicit, yet there is enough chemistry and emotion to keep it from being about the sex.

Creditworthy? I don’t actually know what to say. Once I sped it up, yes. Otherwise definitely not.

Remember the narrator's name well so you'll know who to stay away from. The story would have been a lot more enjoyable if it were narrated by someone else. What an emotionless voice!

I don't believe this is your average historical romance with the simpering innocent beautiful female and the Love at first sight story.

This is a hard read with males whom disregard not just love but remain cynical about women and marriage. It was really really hard to like any of the male characters in this book. But it somehow worked for the storyline. Perhaps it was because this author wrote about strong females who's strength of character shines brighter than any beautiful face.

I truly enjoyed the book can't wait to read the next series.

Ok let me start by saying that the beginning I was slightly bored by the narrators voice although the story itself kept me listening and I'm glad I held out because I soon forgot all about her! Loved the characters, loved the story line, it's a must read!

Average, but it does the trick

I am not going to give away any of the plot I am just going to tell you it is an easy listen if you want to vegg out. The story was very predictable and it wasn't complicated and it held very little depth. Still, it is a great read when you don't want to think about anything too hard and just enjoy a story. It had a good romance flow and the smut scenes were the perfect amount of sexy and were put in at all the right moments so it didn't become too much. I had a problem with the author, though. She does not changer her voice enough to distinguish which character she is reading for so I was confused as to who was talking half the time. Especially when more than one man is involved in the dialog. Still there was nothing wrong with the book, but if your looking to have your mind blown by a story this one isn't it.

SORRY, BUT I JUST DIDNT FEEL THE LOVE

I was expecting so much from this listen but unfortunately Lord Ruan Cynssyr (aka Lord Ruin or the Insincere Cynssyr) came across as just plain arrogant and cold. Anne was in a Laudanum induced state when she dreams of touches and feelings in the night. But in the morning wouldn't the 'evidence' of her lost virginity and night of sex be there? well not in this listen and wouldn't Ruan somehow sense that the woman below him is actually in a drugged state? again not in this listen. I can usually overlook a lot for the love story but there were so many loose ends, unanswered questions and why's that I never really became emotionally invested in the plot.

I didn't feel the romance at all, there were lots of not too descriptive sex scenes, but they were each denying their feelings and Anne continually distrusted Ruan and felt herself inferior all the time. Then, intertwined, there are kidnappings and rapes of young Ladies and the plot somehow involves Ruan and his friends as the clues mount up it's up to them to uncover who the villains are before Anne pays a very high price. There was a full cast of characters including Anne's nearly betrothed friend Devon who I felt sorry for until near the end.

Worth a credit? I got through it but it wasn't a listen that I was desperate to get back to or unfortunately not one that left me with that 'feel good factor' either so sadly I'm going to have to say, IMHO, NO not creditworthy but maybe a sale purchase.

I have a soft spot for this book, even though I the pacing is sometimes a little off, and I think the mystery element to the story detracts from the development of the romance.

Ruan Bettencourt, Duke of Cynssyr is a playboy and serial heart-breaker. But even a man such as he must eventually take a wife, and he has his sights set on the beautiful Emily Sinclair. Her eldest sister, Anne, is determined to prevent "Lord Ruin" from marrying her sister, and does so in spectacular fashion, ably assisted by the man himself.

Having compromised Anne irretrievably, she and Ruan are forced to marry - but to his surprise, Ruan finds himself strangely content with the idea. He quickly discovers that Anne suits him both in bed (and boy, does he discover it! I think the couple does the deed on just about every available flat surface) and out; she is level-headed, intelligent and perceptive, just the sort of wife to suit a man such as he, who is actively involved in government and takes his duties as a peer of the realm very seriously.

Anne finds her opinion of her new husband undergoing a rapid reassessment. Having believed him to be nothing but a dissolute womaniser, she is surprised to discover that he is in fact a man of honour who does not shirk his responsibilities, and, as the book progresses, one who is still haunted by his military past.

I enjoy stories which feature a "compromised into marriage" plot, and this aspect of the story is very well done. Anne has many deep-seated insecurities which cause her to do her best to remain aloof from her husband, but she is so busy trying not to fall in love with him that she fails to notice that he's utterly besotted with her. And Ruan finds communication on a personal level difficult, tending to prefer a good bout between the sheets instead - so the couple has enough problems to work through without the addition of the mystery sub-plot which sees Ruan and his friends on the trail of a serial killer.

But here's the reason for the dreadful pun in the title of this review. The narration, while not the worst I've ever heard, leaves very much to be desired.

Ms McDermott seems to be new to the business of romance narration, and while she differentiates well between characters and finds a good "hero" voice, the pacing is slow, with lots of long pauses between words and phrases; and her British accent (she's American) slips quite often. There are also a number of howling mispronunciations - she pronounces Vauxhall as "Voh-hall" and there's a discussion of prostitutes in which they are called "Cypriots" instead of "Cyprians".

I think I'll be sticking to the print version of this book, and the follow ups that Ms Jewel is writing if she's planning on using the same narrator.

My only quibble with this (beyond the odd Americanism - thankfully few) is the narrator’s odd pronunciations occasionally. Hence the 4.

A romance intertwined with adventure.A plausible hero and heroine .Can't wait for lol 2 !