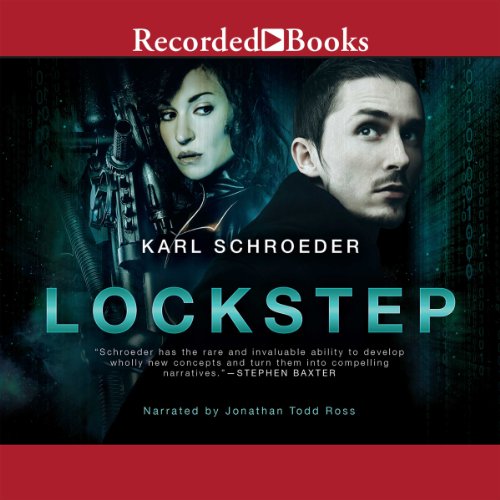 By: Karl Schroeder
Narrated by: Jonathan Todd Ross
Try for $0.00

When 17-year-old Toby McGonigal finds himself lost in space, separated from his family, he expects his next drift into cold sleep to be his last. After all, the planet he' s orbiting is frozen and sunless, and the cities are dead. But when Toby wakes again, he' s surprised to discover a thriving planet, a strange and prosperous galaxy, and something stranger still - that he' s been asleep for 14,000 years.

Welcome to the Lockstep Empire, where civilization is kept alive by careful hibernation. Here cold sleeps can last decades and waking moments mere weeks. Its citizens survive for milennia, traveling asleep on long voyages between worlds. Not only is Lockstep the new center of the galaxy, but Toby is shocked to learn that the Empire is still ruled by its founding family: his own.

Toby's brother Peter has become a terrible tyrant. Suspicious of the return of his long-lost brother, whose rightful inheritance also controls the lockstep hibernation cycles, Peter sees Toby as a threat to his regime. Now, with the help of a Lockstep girl named Corva, Toby must survive the forces of this new Empire, outwit his siblings, and save human civilization. Karl Schroeder's Lockstep is a grand innovation in hard SF space opera.

What listeners say about Lockstep

The concept of lockstep is strong and thought provoking but the teenage drama around it wasn't captivating. I wish for a more interesting plot line in this universe.

It reads easily, like a young adult novel. The performance was well done. Beware, though. The concepts expressed in Lockstep will ruin most sci-fi inter-solar system thrillers you'll see in the future, as they're very creative, and very well thought out.

The concepts introduced in this book is really unique and interesting. Entire planets and its populations goes into hibernation for decades, then to be awake for a few years and then goes back into hibernation. This is a universe without FTL, so by coordinating the hibernation times between solar systems, they mitigate the time dilation effects by slower than light travel. It is quite an ingenious concept and Schroeder explains it really well. Original and unique new concepts are a rare thing in modern sf, and this is one of the best ideas I have seen in sf for a while.

On the other hand, all this is just background and the actually story in this novel is really not that interesting. Basically the main character just wants to reunite with his familiy, but this is complicated because he has been gone for generation and he has in the meantime become sort of a god figure. I hope Schroeder will return to this universe with a better main story.

I almost passed this book up because of another review.

I have heard poor narrators before that made me want to stop listening to an otherwise enjoyable story, but this is not the case with Lockstep.

Is the narrator one of my favorites, no, but he did a commendable job and I found myself enjoying the performance.

Give it a try if you love sci-fi, it will entertain you.

What would have made Lockstep better?

I would need to read the text to get a better feel for it - the performance is sufficiently bad that I cannot even be sure if it is the reader or the prose I'm most disappointed with. That said, what I can say of a certainty is that someone was telling this story *at* me.

What was one of the most memorable moments of Lockstep?

The universe that Mr Schroeder has developed here is original and fascinating - sufficiently, in fact, for me to gut through the most disinterested and perfunctory "performance" I've encountered yet. It helps, of course, that this is a very short commitment.

I've not encountered Jonathan Todd Ross before, but the fact that he has been employed to read more than one audiobook can only suggest to me that this is by far his worst performance. Anyone who had only this credit to their name would never work in the industry again. I cannot for the life of me figure out how the producer allowed this recording to see the light of day, nor how the publisher had the gall to release it.

I will be returning this audiobook and purchasing the kindle version. The value and originality of the underlying 'lockstep' concept is fascinating - irregardless of whatever extent the author is responsible for poorly serving that concept with his prose. I can only recommend against the purchase of the Jonathan Todd Ross narrated audiobook.