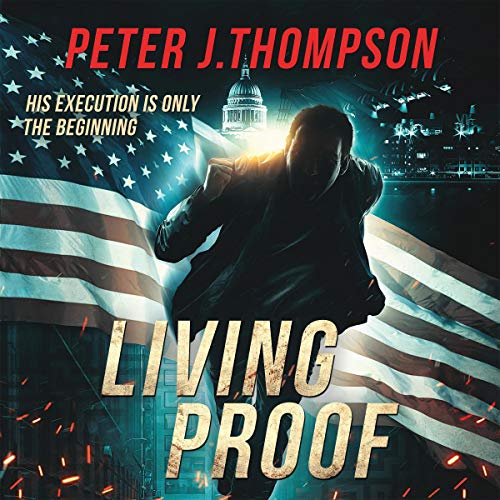 By: Peter J. Thompson
Narrated by: Gary Tiedemann
Try for $0.00

In a top-secret complex surrounded by miles of Texas scrubland, the United States military is working on a new form of germ warfare. Taken from homeless shelters and prisons, the subjects, discarded men and women of America, serve their country as unwilling lab rats.

Ramon Willis didn’t commit the murder that put him on death row. But he’s guilty of something worse - surviving the virus and escaping his captors. Knowing he can’t take on the corrupt system alone, there’s only one person he can turn to - Lena Dryer, the reporter who covered his case and watched him die.

What listeners say about Living Proof

I thought Living Proof was a pretty good debut novel. The book gets very intense at times when an "executed " man turned science project realizes what it going on and who is behind it. This is a plot driven story with a very likable protagonist.
This is fast paced and very suspenseful. I must admit while in a covert government facility where they were doing bio testing on human beings it reminded me of the facility in Stephen King's "The Stand". However, once the protagonist escapes, he does not infect everyone he comes in contact with. On the contrary, the government wants to dissect him because he is the only person their vaccine has worked on.
Gary Tiedemann does an outstanding job narrating.
HIGHLY RECOMMENDED.
If you found this review helpful please indicate so.
Thank You.

This audio book kept me enthralled 100% of the time. When I arrived at work each morning, I hated to turn it off.

Living Proof is an amazing story from an amazing author. I've listened to his two other audio books and they were equally praiseworthy. Hurry up with the next book, Peter!

I absolutely enjoyed this novel. Thompson writes a great realistic story that keeps you engaged and wanting more. Gary Tiedemann narration fits the story and he does an excellent job.

Wow!What a story! A female journalist is doing a series on Death Row inmates.Only the last one affects her.Because of him,she uncovers the story of a lifetime.She also almost loses her life in the process. Gary Tiedemann was a terrific narrator. I was given this book by the narrator,author or publisher free for an honest review.

This is an excellent story well written with so many twists and turns it will keep you on the edge of your seat until the very end.

Living Proof: Gripping, fast paced,and tense from first page to the last paragraph.
Superbly thought out storyline. I loved this book and couldn't put it down.
First I've read/listened too by this author and I'm looking forward to more.
Narration by Gary Tiedemann is good as always. (I've listened to a few of his and never been disappointed).
I was given a free copy of this audiobook at my own request, and voluntarily leave this review.

Fast paced action, likable characters, and a clever storyline all make Living Proof an excellent thriller. I seriously couldn't stop listening, kept telling myself just a little bit more, just a little bit more. I listened to the entire book in less than 2 days. As far as I can tell this is Peter J Thompson's first book … and all I can say to that is WOW. I can't wait to see what he comes out with next. As always Gary Tiedemann does a fantastic job with the narration.

I received a copy of this audio title in exchange for an unbiased review.

Had me on the edge of my seat! The author knew when to tease with tension and suspense.

Thanks to shelly from Raleigh, NC for recommending this book as well as Kindle unlimited. This was an amazing suspenseful experience, I realized I was literally at the edge of my seat during listening to the book. I even went and bought the "Hit Me" by the same author before finishing this one. The narrator was superb in performing. My only complaint is the sound. It was very low during narration but too high during dialogs. I had to keep changing the volume. When it was low, I had the volume too high and still had hard time understanding, and if I got a phone call or text at that time... well, you get the idea. Hopefully, it will be fixed for the next listeners.

Got us through the journey

OK, performance was solid, and the characters and plot arc were solid. That said...it just seemed to drag, esp the last few hours. I enjoyed the underlying concept, as well as the majority of the presentation, but it just seemed to diffuse out at then and have a non resolution resolution. It's a solid thriller/mystery, with solid storytelling, just needs to be tweaked.

This is a story to die for.

"This is a story to die for."
A well constructed conspiracy thriller that drew in the reader from the beginning and just kept on going. A man on death row, sentenced to die for a crime he did not commit. Government backed experiments to depopulate areas with a fast acting virus. And, of course, those who want to expose and stop the seemingly impossible. Great stuff.

Gary Tiedeman gives a tremendous performance, his pleasant timbre turned sinister when telling background stories, individuals given their own distinctive voicings and the overall reading clear, well timed and intoned. Excellent. His narration enhances the book.

My thanks to the rights holder of Living Proof who, at my request freely gifted me a complimentary copy via Audiobook Boom. It had an uncomfortable feeling of incorporating, if not all, at least some real conspiracy fears as well as raising queries about the death penalty. With good characterisation, this is good read for all enjoying thrillers especially with a political or conspiracy twist.
Recommended.

This read, made me examine my own moral compass,, Science needs to happen but at what cost, and to what end. Who does keep a check on the powers that be. Who holds them accountable.
Living proof is a well written book allowing me to enter the world created by Peter J Thompson, A world made scary because it could be happening NOW. I don't like to give away plots in my reviews, as you see enough of them in the summaries, but I do like it when an Author can take me where I haven't been before, and trust me I ain't been on death row yet.
Gary Teideman brings forth the story in a great vocally visual manner.
A good read well worth the journey.