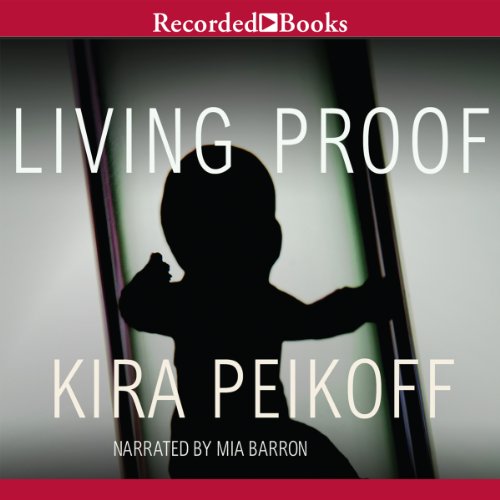 By: Kira Peikoff
Narrated by: Mia Barron
Try for $0.00

In 2027, destroying an embryo is considered first-degree murder. Fertility clinics still exist, giving hope and new life to thousands of infertile families, but they have to pass rigorous inspections by the United States Department of Embryo Preservation. Fail an inspection, and you will be prosecuted.

Brilliant young doctor Arianna Drake seems to be thriving in the spotlight: her small clinic surpasses every government requirement, and its popularity has spiked—a sudden, rapid growth that leaves the DEP chief mystified. When he discovers Arianna’s radical past as a supporter of an infamous scientist, he sends undercover agent Trent Rowe to investigate her for possible illegal activity. The secret he finally uncovers will deeply move him—and jeopardize them both.

What listeners say about Living Proof

The plot kept me coming back, ultimately finishing this audio book in a very short time.

The psychological conflicts faced by the characters were powerful illustrations of those faced by people I know in my own life.

Would you listen to Living Proof again? Why?

Yes. I will go ahead and do so again at some point to more carefully examine the philosophical arguments that lead the main characters to their positions.

The careful crafting of the science and philosophy

She was clear and added plenty to the story with her different voicing. The only drawback was the treble response made it difficult to listen on my car speakers--had to stay on headphones (might be my ears)

It Could Happen Tomorrow

A lot going on in this book. Great suspenseful story wrapped around philosophical issues of medical ethics, separation of church and state, validity of appeal to divine authority, faith vs. reason. The characters were believable. I felt I could relate to their struggles, especially when it came to deciding to take a leap from believing in a faith because of your past rather than listening to the reason that your brain wants to use. I could see that she was doing the "Ayn Rand" thing with her fiction (which was actually a plus to me and I was ready for it knowing some of the author's background), but I feel like she did a great job meshing the philosophy into an interesting plot. My fears were that some of the players might have come off as "straw men" but in my opinion the views of the antagonists were at least presented fairly. Another fear was that once reaching some of the philosophical arguments and concluding on the better positions that it might be hammered at the reader. Both of these concerns proved groundless. Well done!

This story is extraordinarily engaging and compelling. It takes an issue (embryonic stem cell research & treatments) that is often the subject of theoretical political debate, and brings the issue to life with a dramatic plot that expands in detail on the dictatorial government actions that would follow in practice from a formal, legal codification of the principle that life begins at conception. The political system of the year 2027 is a kind of theocratic fascism, in which the events of the plot unfold.

One sees the senseless persecution of characters who are subject to the cruel oppression of government agencies such as the Department of Embryo Protection (DEP) and the Department of Embryo and Fetus Protection (DEFP). The reader becomes enraged upon seeing the blind fanaticism of the devout government agents who act to protect embryos -- five day old clusters of undifferentiated cells that merely have the *potential* to become people -- at the expense of threatening to destroy the lives of *actual* people such as the heroine, Arianna Drake, who desperately fights to save her own life as the villainous Agent Dopp of the DEP fights with equal fervor to prevent her from doing so.

Ms. Peikoff shows us, through the logical unfolding of events, the deadly senselessness of an irrational mystic creed imposed by force on man, who by his nature must depend on reason to survive. She also shows us an inspiring picture of the heroism and unyielding persuit of values that rational men (and women) are capable of. And she does this while telling a damn good story with a well integrated plot and interesting characters. I'm now a Kira Peikoff fan and I can't wait to read her next book.

Despite the good balance of conflicting opinions with plenty of reasonable thought, the motive of this story was to justify the destroying human embryos.
In theory, 5-day old embryos aren’t necessarily formed into a fetus. But the disturbing part of this story is the “revelation” that because humans have rational thought, they can choose how to view their handling of embryos or fetuses. Therefore, if they choose not to view it as criminal, they shouldn’t be held accountable.
Sorry, but not sorry, a fetus with the potential to be a human being should not have its potential snuffed out simply because a researcher or abortion doctor decides that it is insignificant enough to destroy.

I tried.... couldn’t take the catholic bashing by chapter 9 had to quit. I’m not even catholic. Narrator also cannot do older men. She makes them sound decrepit.

I am a scientist and most of the science is well described in the novel. As a Christian I take exception to the thought that one can't be a scientist and a Christian at the same time. The novel is full of stereotypical, devout Catholics who are hardline in their attitudes. The author's attempt to see the world as it would be in the future if all the hardline Christians get their way to limit reproductive rights is intriguing but I remain disappointed that the only out is to lose faith.

Living Proof, the new novel by first time novelist, Kira Peikoff is a, sometimes, valiant effort to express some of the key concepts of rational thinking in a novel format. The problem is the story falls way short of good writing and infinitely short of they hype that preceded my decision to take a chance on a new author.

The book’s number one sin is it never gives me as the reader any reason to suspend my disbelief. I bought the book, I should be an easy mark as I didn’t buy a book not to enjoy it, and yet, somehow the author failed to convince me that anything in her book bears the slightest relationship to reality.

The novel fails in its ability to do this in an entertaining way.

The first few hours, I found the book odious and didn't know if I would be able to complete it in order to do a fair review. Then I discovered the 3X function of my Audible App for the iPhone.

So, with great trepidation, my second day of listening was at three times the speed. I was impressed at how fast I could go through the book and still follow the story. At times the writing got so silly, I would laugh out loud while walking down the street.

I wish I would have book marked more example but for the sake of this review I will offer these few:

"He felt empty, like pretense, personified and exposed." (Which is a good one line review for this novel).

"He felt trapped in an ethical straight jacket laced tight with emotional strings. And for the first time in his life, he began to have a panic attack."

"The air felt sapped of all warmth. Trent wrung his hands knowing that the truth was imminent. A truth he didn't know if he wanted to know but he had no power to stop."

"The report concluded with a paragraph that was painful and embarrassing to read."

And there are many more painful and embarrassing things to read in this book. I can see it achieving a sort of cult status, a sort of “so bad it’s good” kind of status among hipsters. As for myself, there are too many good books to experience and I would give this one a pass.

I liked the pace and stayed up to finish this whole book in one sitting. I recommend this to girls as they come of age as there is a sting female character that has to struggle with similar issues that they may have to tackle in life.