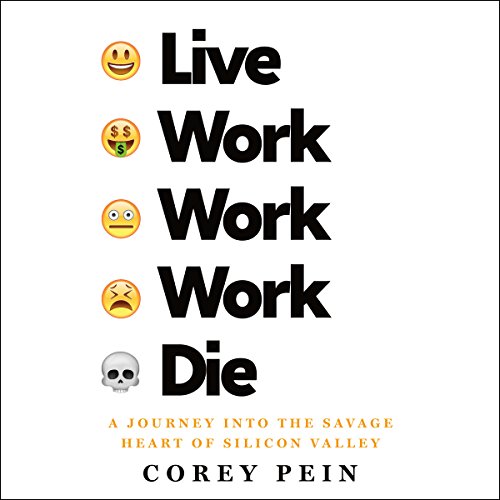 A scathing, sardonic exploration of Silicon Valley tech culture, laying bare the greed, hubris, and retrograde politics of an industry that aspires to radically transform society for its own benefit. This enlightening audiobook is a must-listen for anyone interested or involved in the tech industry.

At the height of the start-up boom, journalist Corey Pein set out for Silicon Valley with little more than a smartphone and his wits. His goal: to learn how such an overhyped industry could possibly sustain itself as long as it has. Determined to cut through the clichés of big tech - the relentless optimism, the mandatory enthusiasm, and the earnest, incessant repetition of vacuous buzzwords - Pein decided that he would need to take an approach as unorthodox as the companies he would soon be covering. To truly understand the delirious reality of a Silicon Valley entrepreneur, he knew, he would have to inhabit that perspective - he would have to become an entrepreneur.

Thus he begins his journey - skulking through gimmicky tech conferences, pitching his over-the-top business ideas to investors, and interviewing a cast of outrageous characters: cyborgs and con artists, Teamsters and transhumanists, jittery hackers and naive upstart programmers whose entire lives are managed by their employers - who work endlessly and obediently, never thinking to question their place in the system.

In showing us this frantic world, Pein challenges the positive, feel-good self-image that the tech tycoons have crafted - as nerdy and benevolent creators of wealth and opportunity - revealing their self-justifying views and their insidious visions for the future. Indeed, as Pein shows, Silicon Valley is awash in disreputable ideas: Google executive and futurist Raymond Kurzweil has a side business peddling dietary supplements and has for years pushed the outlandish notion that human beings are destined to merge with computers and live forever in some kind of digital cosmic hive mind. Peter Thiel, the billionaire venture capitalist affiliated with PayPal and Facebook, is now an important advisor to President Trump and has subsidized a prolific blogger known by the pen name Mencius Moldbug who writes approvingly of ideas like eugenics and dictatorship. And Moldbug is not alone. There is, in fact, a small but influential - and growing - group of techies with similarly absurd and extremist beliefs who call themselves the "neoreactionary" vanguard of a "Dark Enlightenment."

Vivid and incisive, Live Work Work Work Die is a troubling portrait of a self-obsessed industry bent on imposing its disturbing visions on the rest of us.

If you're in tech and haven't read this book...

you're probably a sucker. Pein's work is indispensable for a world finally ready to see Silicon Valley for what it is.

Would you listen to Live Work Work Work Die again? Why?

Maybe, but it's pretty grim.

I like the travelogue structure of the book. Also, Pine's humor helps things from getting too depressing.

I liked the description of his first AirBnB as his first real introduction to the way life is in this sector of the economy.

Peter Thiel is even creepier than I thought. Like way more sinister.

I loved the first three chapters, but later the structure sort of broke down and the narrative lost its flow. The mini biographies came to overpower the nice travelogue structure of the first part. Even so, the book more than held my attention.

This book is the most cynical thing I’ve ever read. That’s not to say that its facts are inaccurate. Rather, it’s to say that it is as if the author looked at people, situations, and companies with the question “What’s awful here?“

It is a valid counterpoint to the dominant narrative. But it is not a balanced and holistic view. There is no time for any good in this book. That is not it’s purpose.

It seems that the only reason he’d mention a ray of sunshine is because there’s a hole in the ozone layer.

It’s a true story, but not a whole story.

Considering tech companies' level of power and influence in the world and in our lives, there is a considerable lack of scrutiny regarding their aspirations, the way they operate, and their general ethical values (or lack thereof). Individual convenience through technological progression oftentimes comes at the expense of the environment, our privacy, and the overall wellbeing of humanity--as the further commodification of cheap human labor is the oil on which many of these companies run on. There is a criminal disregard for the price we py for convenience, and it's largely minimized or flatly ignored by the media (spoiler: there's a reason for this), and the sheer pace and distractive nature of these innovations prevent us from taking a step back and really examining their implications. With hundreds of billions of dollars at their disposal and world class lobbyists on their side, the reception of the media and of governments has largely been enthusiastic approval to push forward unrestricted and at an ever accelerating pace. "Disruption", the buzzword that so much of the industry strives for and worships, is often a simple sugarcoating for unfettered capitalism.

Silicon Valley is a paradox. Mr. Pein showed a random collection of interesting and unnerving stories hidden in the Silicon Valley experience. Hard to draw a conclusion. More unsettling than inspiring. Sheesh!

Terrifying and terrifically timely.
I think that Corey and I would be pals IRL.
It is a tiny comfort to know that at least one other person has been gaping, comparably aghast, at the surreal travesty unfolding around us. Dystopia ho!

Do not take into account the overall rating of this book - it's the product a volley of undeserved criticisms. I am inclined to blame this on cognitive dissonance and technological fanaticism.

In a world increasingly dominated by "techies" and where the dominant narrative revolves around how they will save the world from calamity, this book offers a refreshing escape. The author is a talented writer (and narrator) and experienced first hand some of the least explored and least spoken about aspects of the rapidly growing behemoth that is Silicon Valley. Pein sheds light on a number of negative consequences of techno-corporate power, consequences that are -for reasons that are all the more obvious after listening to this book- brushed aside, ignored or outright censored by ridiculing those who point them out. We need critical voices that... "disrupt" the optimistic, non-critical and quasi-religious belief in the infallibility and superiority of technocrats.

I'm quite glad I gave this book a chance. Everyone should.

As skewed as the reality he tries to describe

Source: I’ve worked in Silicon Valley for about 14 years in tiny startups, darling startups, mega corps, and burnouts and failures. I’ve met some of the folks the author writes about.

As much as the techno futurists get wrong in their blind optimism, the author gets wrong in their pessimism. The history of US tech, both semiconductors to PCs to the internet is full of both questionable behavior but also quiet heroism.

I think the author meant to see what was going on and write honestly. It seems he got caught up in the kabuki theater of much of tech’s ills in 2015-2020 and extrapolated way too far.

Guy is telling his story in a boring way. After two chapters I decided to spend my time on something better than this

You can divide this book into two parts.
The 1st part is describing writer's experience in the Silicon Valley, which is slightly one sided, however, no one is telling about this side hence kudos for that.
The 2nd part is describing writers’ own opinions on matters he doesn’t understand. It is sound more like a conspiracy discussion, I was surprised that the free masons were not mentioned.
Really had an extremely hard time to finish this one.

nothing terribly new but an interesting, scathing and sardonic romp into the contradictions of silicon valley

A sardonic look at Silicon Valley. This comes across as the standard hack approach of adversarial journalism. There is a step beyond this where you comment on the madness but get to understand more behind it. It also claims to be honest, yet at times if doesn't feel like it's being at all honest - it feels more like a novel in places and there's too much of the writer in the way. Maybe this was an attempt to get all 'fear and loathing' but doesn't ring true in many places. It's too tidy, to cut and dry. It's dubious. I'm not saying Silicon Valley isn't messed up - but I'm left wanting to know why and some of the stories of those caught up in it more. Good subject - just needs better journalism.

A strong start that peters out

I found this book after listening to an extract of the Guardian newspapers Long Reads. Here was someone who went to Silicon Valley and gave it a real go... at least that's how it initially came across. The author's time subletting was amusing and eye opening. Frankly, all the first- hand accounts were pretty interesting at first. But, it quickly becomes apparent that the author wasn't actually trying to create a startup. instead he was just slumming it in order to write this book with a bit more credibility, I guess? He seemed to be there just to mock entrepreneurs. Not everyone is a crook, or charlatan! And, after a while even the thinly-veiled attempt at business is dropped in favour of over-long, boring stretches of things the author has researched about the business world and business history. That wouldn't be a bad thing necessarily, in better hands. But, this is dry stuff here and not what was initially promised, in my opinion.

Tech fantasy exposed as a scam

A very timely book in view of the recent revelations about Facebook.

If you enjoy the HBO comedy Silicon Valley this book will really click.

Author comes across as a little mopey, awkward and socially alienated. So he doesn’t really get close to his subjects. He’s made depressing and uncharming and financially constrained. Nowhere near the action and always on the outskirts. The conceptual hook of starting up a start up and fooling Silicon Valley never gains any other air and probably should have been abandoned as the concept. Where it does make worthwhile listening is the thorough research, though at times overly obsessed with take downs on certain techies.