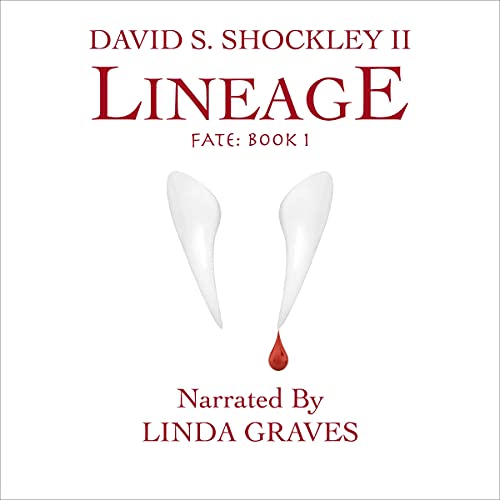 By: David Shockley
Narrated by: Linda Graves
Try for $0.00

Vampires exist. Michael knows this because one attacked him when he was 21 years old.

What Michael doesn’t know is who she was, how it happened, or why she did what she did. What little he does know about being a vampire, he learned the hard way. The self-taught way.

Michael knows that better than anything else. In fact, he’s become quite adept at being isolated, because he’s never met or even sensed another being like himself - another vampire. Not once, not ever.

What Michael doesn’t know is that a chance encounter will drag him out of exile and thrust him into an adventure stranger than anything he could possibly imagine. He won’t be ready for most of it, either, because not even an immortal creature of the night could predict what comes next.

What listeners say about Lineage

The book is good and got some nice original ideas, and the narration works well also with a good reading tempo wich is nice.
Its worth the credit but there is way WAY WAAAY to much crying like they hugged and cried they looked at that and cried There is crying multiple times in every chapter its crazy but its like happy crying sad crying crying... There are other ways to express anxiety or happyness The men cry the women cry everyone cries.

Other than that very nice.

This story is amazing from beginning to end, and weaves a unique, yet timeless tale; from the familiar details of home, having been born and raised in Central VA, to the fantasy world of the Fae, this story never skips a beat.

The characters are written to be so unique, but all together, they form the perfect unit. The nuances of each personality that seem to be brought out in different ways by each of the characters can only be done by someone who has really thought out every detail to bring these characters to life on the page.

If you love pop culture references, action movies, love stories, fantasy creatures, and the feeling of not being able to put a book down, then this is the read for you!