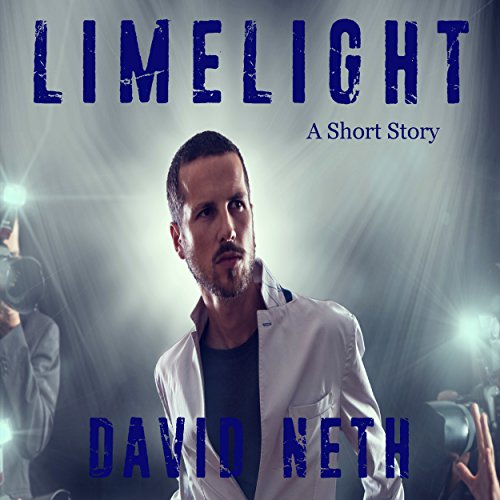 For Jay Owens, being a celebrity was exactly what he wanted. Access to the clubs with the best parties. Devoted fans who would give anything for a picture with him. First-class travel around the world.

But as the luster of his fame began to fade, he became desperate to find a way to retain his stardom. Jay was once again prime tabloid fodder when he married actress Heather Garrison, catapulting him back to the top of the charts.

Wedded bliss wasn't Jay's plan, though. Publicity was. When his estranged wife delivers some unexpected news, Jay and Heather's fragile charade threatens to crumble, putting his career at risk yet again.

I feel like thos story line could really go somewhere. The author set up the characters so quickly and I got a real sense of them.

Yes. I wanted so much more

Which character – as performed by Andrew Russell – was your favorite?

Andrew is a great narrator. He nailed all the characters, from the over-enthusiastic radio announcer, to the main character and his wife. All the characters were distinct and believable

Who was the most memorable character of Limelight and why?

Ugh! I wanted so much more. This was a very good short story. I sure hope he writes a continuation of this. While the couple are so selfish and busy with life, it seems they are starting to wake up to the real world.

The narration was awesome. I loved how he did the DJ's voice.

Where does Limelight rank among all the audiobooks you’ve listened to so far?

There is no ranking for books to me aside from good or bad and this would be in the good column.

What was one of the most memorable moments of Limelight?

There wasn't enough of the story to have anything completely memorable aside from the entire story.

Have you listened to any of Andrew Russell’s other performances before? How does this one compare?

This would be my first Andrew Russell narration.

This was a good quick listen. I just wish that there was more. This seemed more like a teaser than anything else but it was still really good start to a story or maybe a prequel to a series.

This short story gives you a glimpse into the life of a Star. The characters are gritty and the story is brief but detailed. Just the right length to kill 1/2 hour.

What made the experience of listening to Limelight the most enjoyable?

Despite being a very short story, Limelight provided an interesting character study of an unlikable, egotistical actor. Having such an intriguing main character makes for fascinating listening.

The main character, because he was unlikable, but very well fleshed out - far more than I would have expected from such a short story

What does Andrew Russell bring to the story that you wouldn’t experience if you just read the book?

Andrew is a great narrator. He nailed all the characters, from the over-enthusiastic radio announcer, to the main character and his wife. All the characters were distinct and believable.

A well written story that is performed extremely well by the narrator.

nor my favorite had a hard time continuing. the end just kind of dropped off

this story starts out slow but then it grabs your attention.a celebrity love story that catches your attention. I just hope there will be a part two cause it leaves you hanging and wanting to hear what happens with these two next.

this is a very short story but had my attention the whole time. my only complaint is that I want to know more! I'm hooked and would love to know what happened after Jay got home. Grrr.

Short and sweet I really enjoyed what was there

This is a very short and sweet listen. There is nothing more I can tell you that the author doesn’t have in the book summary. Anymore and it would give the whole book away. I will say this it is a nice way to get a little taste of the author writing style.

Mr. Russell did a wonderful job of narration which a delightful voice that you have no trouble getting lost in. There are no background noises or any places where the audio volume is higher or lower than the rest of the book. He gives you delightful characters that you have no trouble knowing who is talking or what their feelings are. His voice tones gives you all you need to know on what each character is thinking or feeling. I enjoyed his male and female voices. Again it was a nice taste of what this narrator can do to get you invested in other books he has narrated.

I really enjoyed this authors writing style. However just as you were really getting into the story the story ends with you hanging on. I would have loved to have known how this story finishes and just what happens to both of their careers. I am unsure if this is just a prologue and another book is going to be published with the rest of the story. I thought the characters where good and the way the scenes play out you have no doubt this is going to be a mess no matter how the author takes it. I have to feel for each one of them and hope for the best and whatever decisions they might make the fall out isn’t too bad. It was a nice taste which I do hope I will get to know the outcome in a full book. I look forward to more from this author.