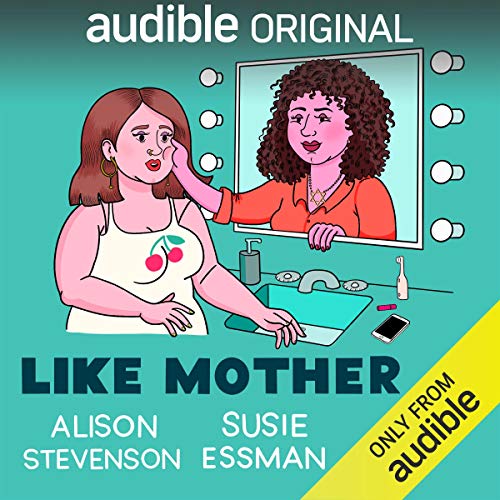 Alison Stevenson is a comedian, writer, and creator of Like Mother. As a stand-up, she has two full-length comedy albums under her belt, *Eat Me (2017) and Mommy Issues (2019). Since the start of her career, Alison has centered her work on both analyzing and dissecting her personal life – specifically dating, body image, Judaism, feminism, and how they all intersect with one another. She first gained popularity as a VICE columnist and has since written for various publications such as Glamour, The Guardian, Huffington Post, and MAD Magazine. She also wrote and starred in two short films, Thirty-Six and A More Modern Romance. Currently, she co-hosts a weekly livestream show called The Perfect Women (Adult Swim streaming), and can be heard on her dating podcast, V Single. If you ask her though, she’ll tell you her greatest accomplishment was being featured in an Ariana Grande music video.
Photographed by Stevie Anderson
Susie Essman
Bridget Everett
Additional Details

Susie Essman has played the sassy Susie Greene for all ten seasons of the critically-acclaimed HBO comedy series, Curb Your Enthusiasm, and is in production for season eleven. Her hilarious bouts of withering sarcasm and uninhibited insults have become her character’s trademark.
The Los Angeles Times calls Susie, "The most lyrical purveyor of profanity on television. She makes the entire cast of The Sopranos look like rank amateurs. It really is a gift." The New York Times called Susie "one of the most vivid characters in the show, whose off-color tantrums have become an audience favorite the way Kramer's clumsy entrances once were." The New York Observer (which calls her "fantastic") says "she's taken female cursing to longshoreman levels, pummeling her bumbling, barrel-bodied husband with potty-mouthed invectives like 'You fat fuck!'."
Susie’s streetwise vernacular is perfectly suited for her life in Manhattan where she has been a veteran of the world of stand up comedy for thirty seven years. Currently, while performing recurring roles on Comedy Central's Broad City; Tru TV's *Those Who Can't; and NBC's Law & Order: SVU, Susie divides her time between New York City and upstate New York where she lives with her husband, four step-children, and a dog.

Labeled "one of the greatest live performers he has ever seen" by Jerry Seinfeld, "a mouthy, flesh-jiggling early Bette Midler" by The New York Times, Bridget Everett is a singer, actress, comedian whose explosive and unpredictable performances have taken comedy festivals all over the world by storm.
Bridget can next be seen in Tate Taylor's Breaking News in Yuba County opposite Alison Janney, Mila Kunis, and Regina Hall and produced by Jake Gyllenhaal. It was recently announced that HBO ordered Bridget's series Somebody Somewhere from Hannah Bos and Paul Thureen, which Bridget will star in and produce alongside Bos, Thureen, Carolyn Strauss and the Duplass Brothers. On the feature side Bridget has co-starred in Pattie Cakes$ and Fun Mom Dinner. She recently co-starred in the HBO limited series Camping. Bridget has also appeared in Judd Apatow’s Trainwreck and Girls along with 2 Broke Girls, Inside Amy Schumer, and Netflix’s Unbelievable, Lady Dynamite, AJ and The Queen, and Living With Yourself.
Everett and her band, The Tender Moments, perform regularly to sold-out crowds and have welcomed special guests as varied as Fred Armisen, Flea, Patti LuPone, Marc Shaiman, Peaches, and Jake Shears (Scissor Sisters). Their album, Pound It, is available now on iTunes. Bridget recently starred in the hit off-Broadway show "Rock Bottom" at the Public Theater in New York.

Getting caught up in a mystery or tangled family drama; laughing with, rooting for, or crying over people who don’t exist…
ARTICLE

Why the foul language?

The story is a great idea with purpose and resolve. But the foul language was unnecessary, and outright distracting. The point of the language I believe was to highlight how selfish and uncaring, immature and unfiltered Alison is, but surely it could have been written with more finesse and tastefulness. It went to far and was outright nasty, ruining the ability to fully enjoy the purpose of the episodes.

Love this. Relatable in so many ways.

I love this so much. The relationship between mom and daughter is so relatable even without having the same beliefs. It’s very real on a daily basis and is very encouraging and thoughtful about the mother/daughter relationship. How they deal with relationships with men in their life and their family opened my eyes. How we are and how we try to be so different from our mom’s is proven to be silly and this shows we just need to let it be and cherish it. I listened as a daughter as well as a mother. I smiled, I laughed, I cried. I related and am so glad I came across this. I listened to every episode in 1 sitting and want more.

I really enjoyed this storyline. Whether you're a mother or a daughter or both, you will definitely find some relatable moments. This story does a great job of reminding us that we all have flaws but that we all are loving too.... sometimes in our own way. Love the sound effects in the book made me feel like it was a movie on in the background.

This story was light harded and cute. Just what I needed during this covid time.

Great acting all around. Also loved the stories. Can’t wait for more from this author!

I love the stories. They are funny, smart, relatable and authentic. I can’t wait to hear more from Alison! Great work and highly recommend.

The writing is so good, and the narration is really fun. I hope they make more series like these- I really liked the main character.

So Relatable, even for a 35 yr old nondenominational black girl!

I’m on episode 8 right now and seriously, I’m loving this! I had honestly never heard of the main character (Alison) before this, but “Like Mother” made me look her up, and I’m a fan now. Just downloaded her 2 albums also! Thanks for the amazing work!

Oh wow, anyone with a Jewish mother will really relate to this. Timely. Full of mommy issues. Very funny.

I loved every minute of this. It felt close to home and warm. The performances were so great! Highly recommend !

cute. i wish it was longer.

initialli i was like..why am i spending my time listening to mother and daughter fighting all the time? but then i started appreciating the story, and the meaningful lessons behind it. loved it.

I loved this, so frank and real. I lost my mother a few years ago but I can totally relate! Well done and so refreshing. Love the honesty. Feminist must read list !

This is warmly written & well produced. Alison Stevenson's delivery is distracting for me - it sounds like she is reading the lines rather than acting the scenes. Maybe it's just a style but it takes me out of the story completely. Susie Essman is excellent and they have good chemistry. I will give their next collaboration a try for sure.

Well written, great dialogue and performances.
I do hope a second series is in the pipeline.

Sorry, but stressful and not enjoyable to listen to. Since both actors are comedians it probably would have been better if both stars had collaborated on the script.

Best free item I have got from Audible, superb

It may help if you're Jewish. This is a great and deep production. Funny, sad, real. Never boring.

well written, fást pace,a blooming good listen. I hope there will be more so we can see how things develop

A Must For Mothers and Daughters

I absolutely loved the performance and reflected on my relationship with my own daughters.

Another good book spoiled by audable

Why does Audible on my fire tablet insist on playing the last episode after the first. Evertime ? Does anyone else have this problem?
Amazon can you make the numbers bigger bc as well so we can see if this is going to happen and take alternative action.

Loved this story, very entertaining. Warm and funny! Well narrated and most definitely worth the time to listen.