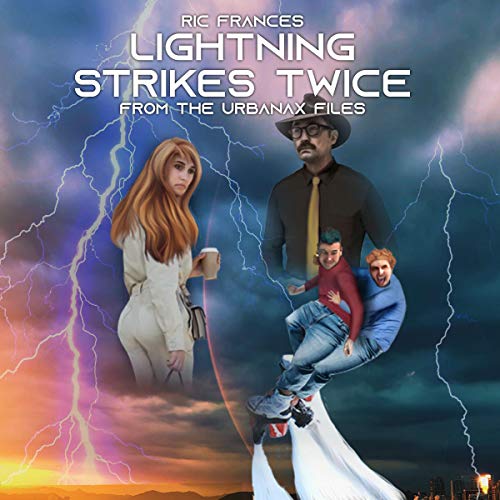 By: Ric Frances
Narrated by: Emmanuel Chumaceiro,Shannon McDermott
Try for $0.00

Lightning Strikes Twice: From the Urbanax Files is an action-packed, adventure, detective story full of suspense, mystery, romance, and twists.

When a kidnapping occurs in the Michaels' home for the second time in two years, chaos ensues. The husband and father of eight-year-old Audrey and her mother calls in a favor: former New Orleans police detective Richard Urbanax, widely considered the best in Southeast Louisiana. He is assisted by his 18-year-old daughter and protégé, and his genius, tech savvy 15-year-old twin sons, whose futuristic inventions are far more advanced than any crime fighting team in the world. Racing against the clock, a maniacal kidnapper(s) and even one member of the NOPD, can the Urbanax family find the hostages before they are harmed?

With so many suspects to investigate will they run out of time? Can you determine whether it is one kidnapper or more? Is it the same kidnapper(s) as two years ago when Audrey's six-year-old cousin was abducted? Whose alibis will hold and whose will fold? Is the father and husband above suspicion? Will nerves shatter as they await a ransom demand? Each chapter reveals new clues and ends with a question or a statement that propels you into the next chapter. Whether you're 15 or 55, you'll get involved and try to solve the mystery.