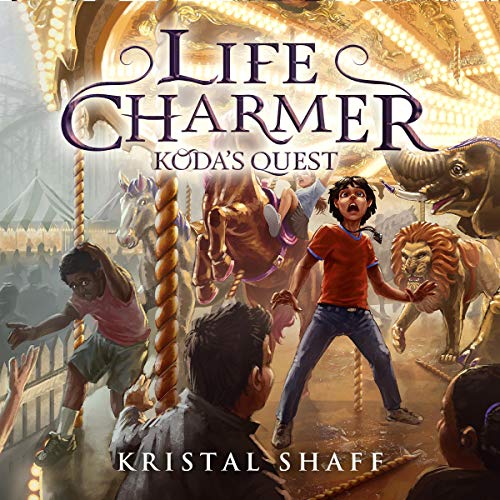 By: Kristal Shaff
Narrated by: Jonathan Brady
Try for $0.00

Twelve-year-old Takoda Schwartz, aka Koda, spends his days dodging bullies out to get him for his Native American heritage. One day, he touches a magic-loaded arrowhead on his family farm which lands him on his backside and gifts him with the ability to animate wooden objects. When a shape-shifting trickster god appears and knows far too much about Koda’s emerging powers, he opens Koda’s eyes to a real-life world of Native American mythology.

Now Koda must come to grips with his abilities, escape a two-faced cowboy creature who tries to eat him, dodge an evil pack of dog men, and stop an unseen enemy who would rather have him dead. At the same time, he leads a motley crew of misfit heroes - and a wiener dog with a superiority complex - on a quest to stop a not-so-natural disaster of monstrous proportions.

Circumstances right now prevent me from writing an extensive review. I will update my review as soon as I am able. My seven year old son is enjoying listening to this with me.

I hope the author writes a sequel!

I can't find a sequel to this book, but I hope there's one coming. This was a really well done tale. I saw somewhere that it was compared to Rick Riordan's mythology-based stories, and I would agree with that. I was reminded -- in a good way! -- of the Percy Jackson series in particular in tone and target audience. The author drew heavy inspiration from Native American folklore and legends (though she was careful to say right up front that it wasn't 100% accurately represented, and that the reader should dig deeper if they want to know more -- I appreciated that warning). It was a believable and enjoyable cast of characters that were really brought to life by the excellent narration. I would definitely recommend this book, and as I've indicated, I would welcome a continuation of the story.

I received this as a free copy at my request in exchange for an honest review.

Fantastic YA in the Vein of Rick Riordan

Koda's Quest is a fun little story in the same vein as Rick Riordan's works, but with a Native American protagonist. The author does admit that the mythology incorporated has errors and encourages readers/listeners to do their own research, especially as there are differences in Native mythology among different Tribal Groups, even in the same State or Province. That being said, it presents a relatable and believable 12-year-old protagonist growing up in rural America, yet away from the Native American side of his roots. The story is fast-paced and provides a good mix of drama and humor. Highly recommended!

Disclaimer: I was given a review copy for free and have voluntarily left this review.