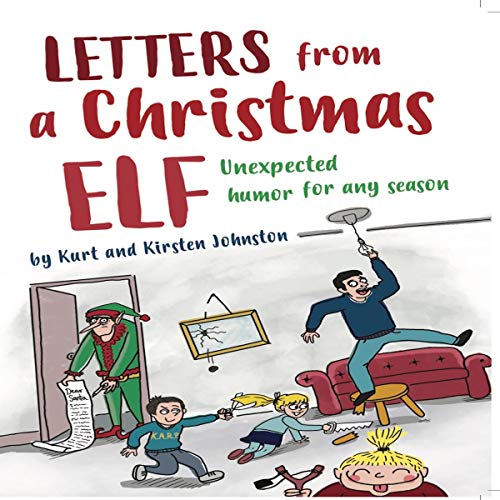 Letters from a Christmas Elf: Unexpected Humor for Any Season

Letters from a Christmas Elf: Unexpected Humor for Any Season

One of Santa’s trusty elves is assigned to report on the Johnstons. He follows the lives of Kirsten & Kurt and their eight children, along with a few cats, and a dog. The family has gotten older, but wisdom still eludes them as they continue to find new ways to get laughed at without even trying. These letters tell the truth most sane people won’t admit - the naughty, the nice, and the nonsense. Does this family deserve anything from Santa? You decide.

Letters from a Christmas Elf: Unexpected Humor for Any Season is 25+ years of real Christmas letters chronicling the witless antics of an ordinary family - resulting in extraordinary humor.

The Elf shares the following insights:

If You Let Your Kids Talk to Strangers, You Will Be Sorry

Kirsten had all five kids at Walmart. They came across a friendly man in one of the aisles and Ellis (three) gave him a cheerful “Hi!” The man responded in kind, then Ellis really charmed him with, “You poop in your pants.” By this time Kirsten was frantically trying to leave the aisle. As they “raced” away, Ellis repeatedly yelled with increasing volume, “You poop in your pants!” This behavior guaranteed Ellis the presidency of K.A.R.P. (Kids Against Relaxed Parents).

Kurt asked for Anna’s (12) advice about a new pair of sunglasses. A few weeks after the purchase, Kurt determined the glasses were unisex at best. He complained to Anna. She replied, “You brought me three pairs of women’s sunglasses and I chose the pair that looked best on you.”

One day Maren (16) was babysitting. She had a Sonic drink that she shared with Hyrum (six). With anguished tears, she told him the drink was only for girls and he was going to die. Skeptical, but worried, Hyrum said, “I’m going to ask Mommy when she gets home.” “You’ll be dead by then,” came Maren’s loving reply.

Okay, I’m a little biased when I say the humor is great - so take that for what it’s worth. I am an Eagle Scout, so that should mean something! But I’m being completely objective when I say Peter Borys’ performance as narrator is outstanding! I loved working with Kirsten to write this book and I have loved reading it. But my absolute favorite way to experience this book is to listen to the audio version by Peter. He’s absolutely fantastic! Sample it and hear for yourself!