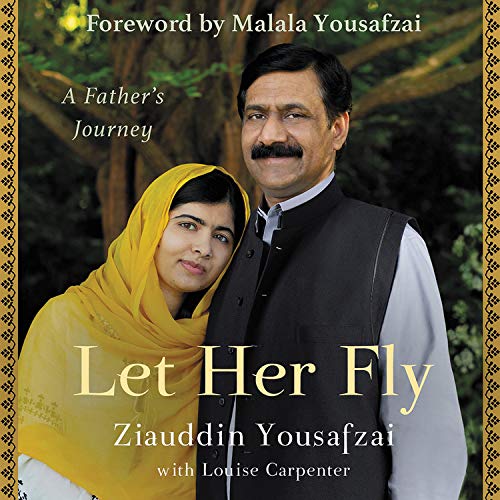 A moving and inspirational story, with a deeply personal look into the Yousafzai family, Let Her Fly traces Ziauddin Yousafzai's journey, from an unconfident stammering little boy living in a mud hut in the mountainous region of Shangla to a man who has broken with tradition and proven there are many faces of feminism.

With humor and sincerity, Yousafzai describes his life before the Talibanization of Mingora, scenes of his sons Khusal and Atal fighting kites on the roof, his progressive partnership with his wife, Toor Pekai, and the challenge of raising children in an unfamiliar country. After Malala was shot by the Taliban, the Yousafzai family was completely uprooted from their home in the Swat Valley and forced to start over in the United Kingdom. Now, Ziauddin expresses the complex pain and joy of his return, six years later, to the site of Malala's attack.

Let Her Fly is an intimate family portrait by the father of one of the most remarkable leaders in the world today. Ziauddin and Toor Pakai have set a singular example for parents who hope to empower their children to make a difference. Let Her Fly will resonate with anyone who has ever cared for a child, as Ziauddin Yousafzai shares what he's learned from his children, and what he hopes to teach the world.

What listeners say about Let Her Fly

This is the story of Malala as no one else could tell it. Ziauddin shares his personal journey from his childhood being raised as a traditional Pashtun man in a patriarchal society, to his personal commitment to make sure that the women in his life that he loved and all of the women of his country are able to be free and to follow their own dreams without being chained by cultural restrictions. It’s a wonderful and engaging story.

Amazing story from the side of a father

The performance brings such depth to his story and makes you feel his words to your core. I highly recommend listening. For a non-native English speaker he did so incredibly well! I felt like I was by his side through it all.

A very human story of the love and courage our children inspire. Infinitely encouraging and a testament to the resilience of our species.

I really enjoyed this book. it was so touching listened the way that this father admire and love his daughter. Priceless!!!