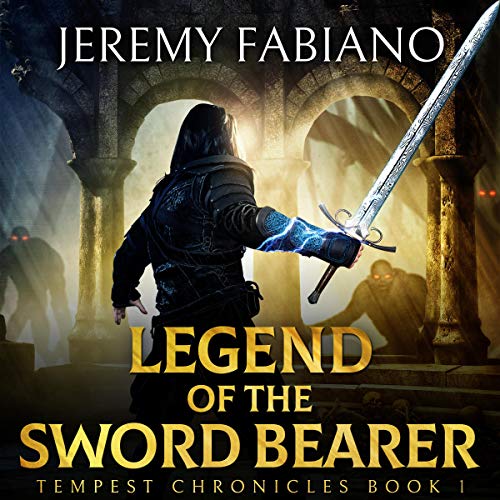 Legend of the Sword Bearer

By: Jeremy Fabiano
Narrated by: Samuel E. Hoke
Try for $0.00

The illness has consumed him.

Would this stranger’s offer give him a second chance?

It looks like a game. Looks can be deceiving. Paul Nelson, the CEO of Tempest Inc, has developed another world and he’s ready to send in another consciousness. This time, though, things are different. Those that came before have caused some troubles and his world is in peril.

For Steve, it’s a last chance. He’s got nothing to lose. And who knows, it might be fun?

As a warrior named Abalonious, his body gone, Steve must adapt, learn, and grow to survive. But this world isn’t exactly as advertised. There’s a darkness coming. It looks like fun will have to wait.

And there’s a secret nobody wants to talk about.

Will Steve piece together enough to live?

More snark than you can shake a stick at? Double check.

"To sum it up, Jeremy took a Fantasy, SciFi, and a gaming idea, and mashed them together skillfully, pushing Legend of the Sword Bearer to the same quality of Ready Player One. We at NeoLeaf Press give this book our Gold Recommendation and rate it 5 out of 5 stars." (NeoLeaf Press)

What listeners say about Legend of the Sword Bearer

You are on deaths doorstep. Why not agree to have your consciousness uploaded into a game. Gather a party level up take on the quests needed to get the game in order for others to play...is it real? Is it a game? What is this legend of the sword bearer that must be fulfilled by him? What if he fails? Enjoy this great LITRPG fantasy novel. I was voluntarily provided this free review copy audiobook by the author, narrator or publisher

This was a longer book but it went by fast. I thought the writing was good a Samuel Hoke's voice made this character stand out in the Litrpg world. Hes a man not a boy.

Interesting story if a bit plain

I kind of liked this story but throughout I felt like I already knew the story. A few jumps left me unsettled but nothing really bad. Narration was decent but there were some run on sentences that caused me to rewind and figure out what was being said. Once I placed the period I was able to read the sentence as it was designed. Good character voice separation.
I received this free review audiobook and I am voluntarily leaving this unbiased review.

I absolutely loved this book. And being a gamer myself I completely fell in love with the storyline once you got in game. Great job.

if I'm going to be critical though, maybe add more actual game mechanics. Such as more leveling, I felt that the characters have done plenty enough to earn the experience to jump more then a few levels. Also I hate to say it but if they can respawn, where's the death? no one makes it through a game in the first shot all the way through.

All in all, I cant wait for book 2. I'm really excited about how this plays out.

This is the first book in this series. It is a good audio book. I will follow this series and looking forward to the next book.

Narrator has a nice voice, though his cadence is a little slow for my taste - this is easily fixed by playing at 1.5x speed.

Story was about a guy that got his mind uploaded to a video game and has to attempt to save his new world by thwarting a faction that are trying to destroy it.

Narrator is a little monotonous, but voices become much better when audio is sped up... he just reads really slowly.

The story... so much happened, and the mc didnt stay in the same place for long. The main bad guy didnt really feel like such a great threat either ... feels a little rushed but probably really good for a first attempt at this kind of book

Awesome Start To A Series

This is an amazing first entry into a new LitRPG series. The story is fast-paced and filled with a bunch of fun characters. A much bigger world is hinted at in the storytelling, and I'm looking forward to exploring that more with future books.

This is a pretty good story and I liked the swordbearer hook, it leaves a lot of room for additional adventures and sub-plots. The setting was sort of a planned reincarnation, uploading the consciousness to the game world. I find it difficult to classify this in the litRPG genre. To me, it’s simply a magical fantasy adventure with a few basic game elements thrown in to capitalize on the popularity. I find it interesting that there is no major female character. There is plenty of action from start to finish but the whole point of the adventure seems to get lost in the action. The story flows from one fight to another with no particular goals being met. Sort of one dimensional or tunnel-vision-esk [sic]. The mixture of technology with sword and magic is a nice twist and a major element in the story. Three-point-five for potential. I was given this free review copy audiobook at my request and have voluntarily left this review.

The illness has consumed him. Would this stranger’s offer give him a second chance? It looks like a game.
gamers would love this story lots of action

I always like a new way of how people enter the gaming world and this one is quite well done, quite a bit of attention needed to keep tracknof everything happening and especially to start the characters are easy to guess at.
Once past this then the action heats up and i found the developments very good and the use of magic and tech was very good , i would think that the 2nd in the series is a lot more thrilling.
Narration by Hoke who im new too was good although i found the main character not what i imagine he would sound like. Again like the story once i got more into the story the MCs voice wasn't as bad and the other characters were done very well.
Probably closer to about 4.3 stars then the 4.5 i would say.
I requested this audio and have decided to leave my thoughts on this for everyone.