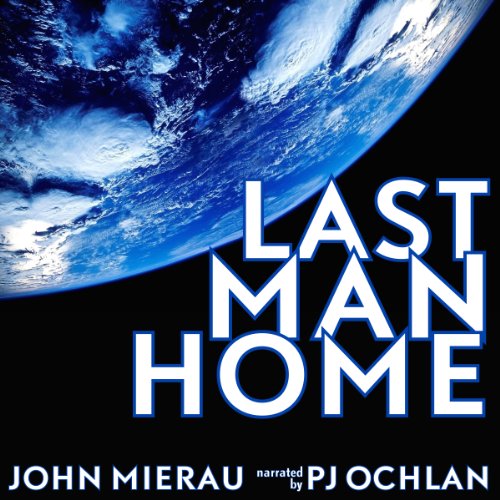 Eight years after the war with the Alotans, Jake, Teddy, Gris, and Dru are the only survivors of Tom Callahan's squad.

They're gathering for their annual reunion - but this year a new face wants to join in: an Alotan going by the name of...Tom Callahan.

If you could sum up Last Man Home in three words, what would they be?

Have you listened to any of P. J. Ochlan’s other performances before? How does this one compare?

No. P.J. Ochlan is a new narrator to me. But I enjoyed his voice as well as others I've heard. The narrator has read it to compliment the writing with his innuendos and speech annunciations - like he's living the moments.

I like the narrators voice and reading of this story. The pacing and vocal attitude for each character and happening were well orchestrated. He even talked in different speech patterns for the characters and their species. I could almost hear the narrator on a tv show - maybe Defiance or something.

By the end of the story I felt the closeness of the crew that was formed from what they lived through at war. How they are like brothers.

This thing is too darn SHORT.

What made the experience of listening to Last Man Home the most enjoyable?

I know John; listening to his stuff narrated by someone else was good - I've listened to his ENEMY LINES, which he recorded himself, about a year ago. His own reading voice is interesting, mind you, but the new voice was different enough to keep up the interest.

Jake, the narrator. Seems like a realistic portrayal of a case of what my father's generation would have called "combat fatigue" or something similar.

The setup, in the little bar/store in Quebec cottage country ... I know places like that.

Veteran's reunions can be fun ... NOT THIS TIME.

That would practically have to be an animated flick. It would make a great anime.

Would you consider the audio edition of Last Man Home to be better than the print version?

Amazing story and narration - the intensity and accents really bring the characters and settings to life. Redemption is there for the characters, but it's not easy to reach.

Which character – as performed by P. J. Ochlan – was your favorite?

I liked the secondary characters voices a lot, and that is why I gave it 5 stars in that department; as well as being a sucker for comfortable old buddy insults and sarcasm.

The firefight near the end is now a favorite action sequence of mine, I could sense stuff toppling, the chaos and speed of the action in both the writing and narration.

There was plenty of action, but behind it were the ideas (world building and character particulars) that keep me interested. A lot of it seemed oddly familiar but very strange at the same time. I don't like giving 5 stars across the board on principle but I can't find anything to fault. It's a fun ride.

The voice acting made the camaraderie among the characters very believable and touching. As short stories go, this stands well on it's own and gives a taste of a larger universe for bigger stories.